You are here: Home / Uncategorized / Having a “snail” of a time…

With the passing of April, it was finally time for last year’s trainees to leave us and go off on new adventures! Wishing you all the best of luck on the next stage of your journeys, guys.

Now it’s our turn to take the reigns, which is a bit scary – not gonna lie – but I’m looking forward to seeing what I can achieve over the rest of the year.  It’s time to get my thinking cap on and come up with some project ideas of my own … (suggestions welcome!) Hopefully I’ll have some plans forming by the time I come to write my next blog, but until then here’s what I’ve been up to over the last few weeks!

Just before Kirsty left, I tagged along on her final two events to lend a helping hand;  an ‘Intro to Freshwater Invertebrates’ workshop in Alloa and a family wildlife explorer day with refugee families in Glasgow’s Pollok Park. Two very different events but both really successful and a lot of fun. Well done Kirsty! 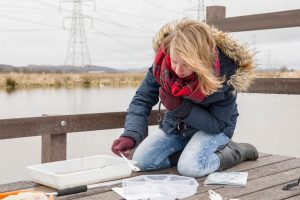 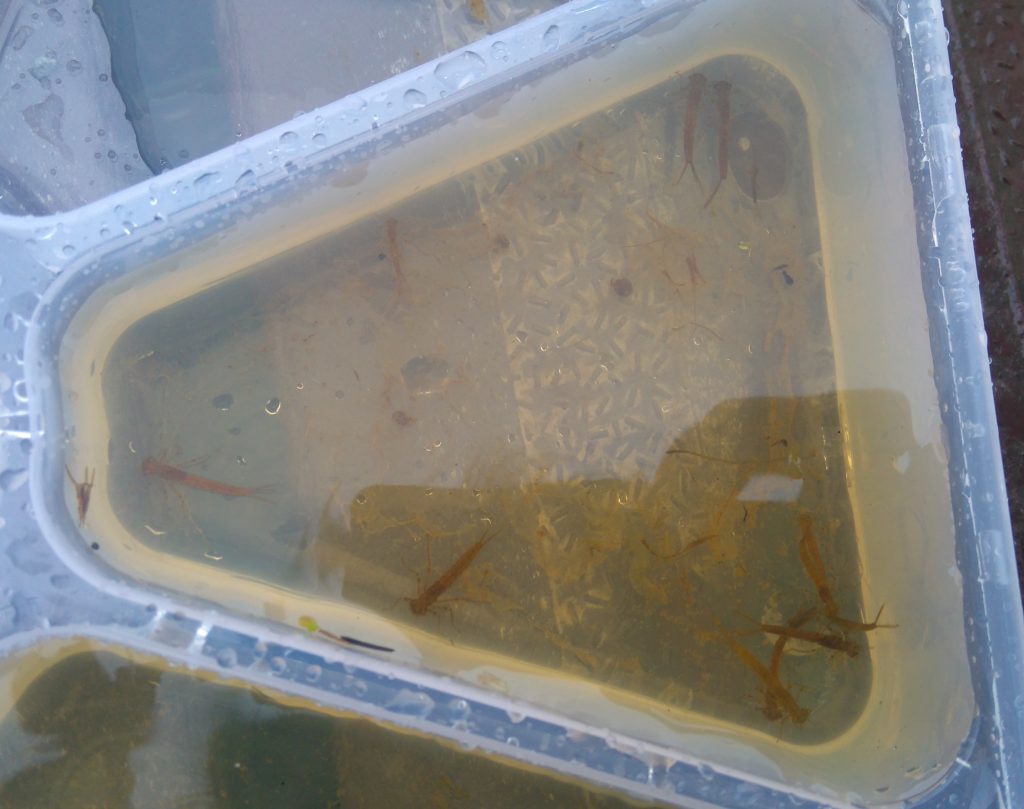 One spot was brimming with damselfly nymphs! 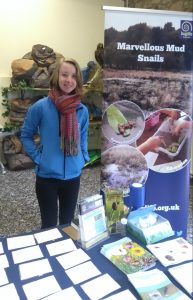 All set up and ready to go!

The following week, I had the exciting job of attending an event by myself for the first time at Edinburgh Zoo! As part of their Wild about Scotland programme, families were invited to the zoo for a day to learn about Scotland’s amazing variety of wildlife. I went along armed with my Buglife paraphernalia and set up a stall to talk to people about our Marvellous Mud Snail project. 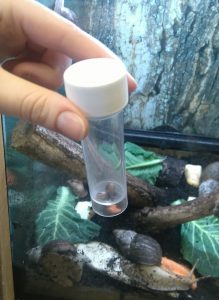 The day was rather windy and I had to keep rescuing my flyers from blowing away, but other than that it was a success! Lots of kids enjoyed playing the freshwater matching game I had brought along and were fascinated to see how tiny the shells of the pond mud snail are.

Another exciting venture for the mud snail team was to Parliament for Scottish Environment LINK’s event celebrating young environmental campaigners. It was a great chance to promote our mud snail project and engage with MSPs and other environmental organisations. 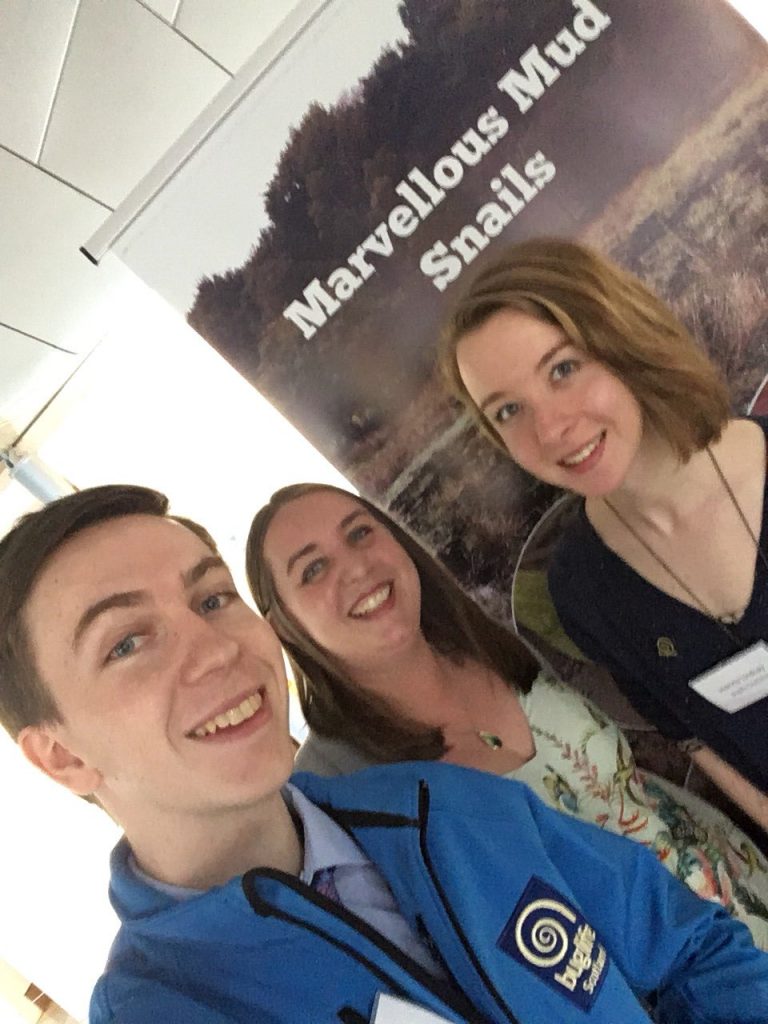 On the more practical side of things, we’ve managed to get out to four of our pond mud snail sites to do surveys over the last few weeks. All sites surveyed were found to still have healthy populations; the site in North Lanarkshire came out on top with a whopping count of 170 snails – and that was just a sample! We were also pleased to find that the Clackmannanshire population is spread across a wider area of the site than was originally thought and we’ve recently received news that one of our primary schools finally has snail eggs!  It’s been a good month for our pond mud snails! 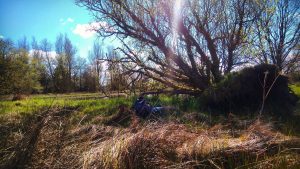 Sunshine at our Clackmannanshire site! The population was originally only found under the tree stump (right) but is now more widespread across the marsh. 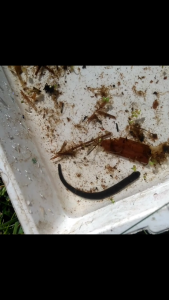 Found the biggest leech ever while surveying! 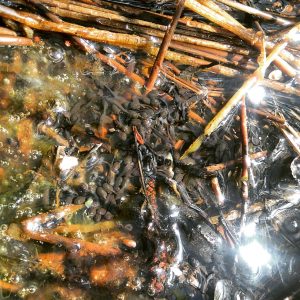 Came across a big clump of wriggling tadpoles. 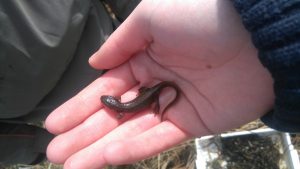 A cute little palmate newt at our North Lanarkshire site! Found lots of efts too.

Having become pretty familiar with the pond mud snail over the last few months, it was about time I learned about some of the other 30+ species of freshwater snail that are found in the UK! Who knew there were so many? For this, myself and Ally spent a morning with snail expert, Adrian Sumner, searching for molluscs along the Union Canal in Falkirk. Under Adrian’s guidance we sorted through our findings and ended up with around eight or nine different species. 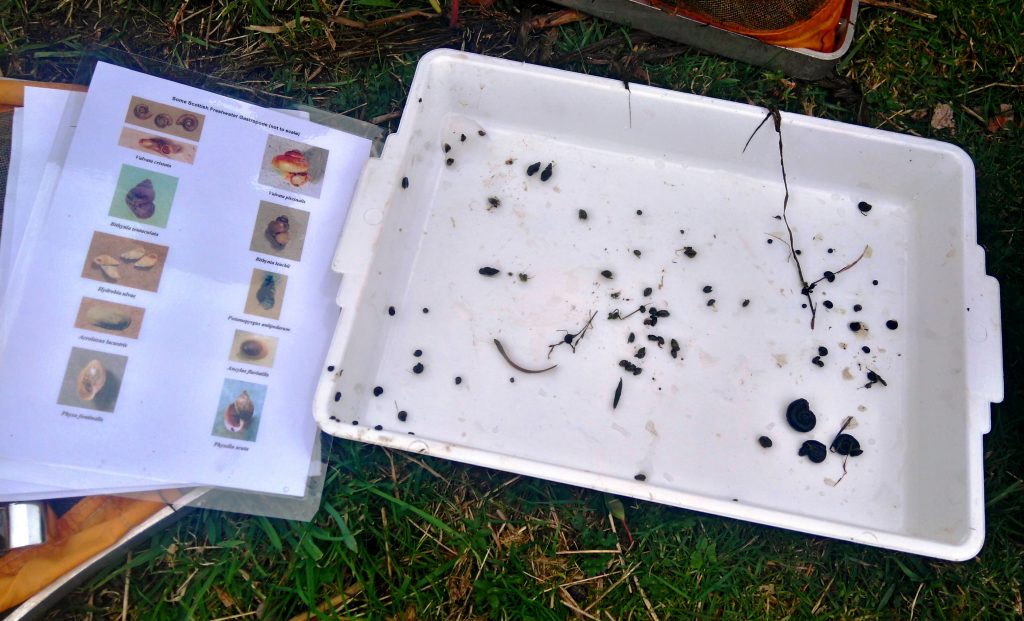 I also had the chance to practice more ID at my second FSC course, this time looking at aquatic hemiptera (water bugs) at Malham Tarn Field Centre in sunny Yorkshire. It was an intense weekend of peering down the microscope at tiny bits of bug anatomy but it was absolutely fascinating and I learned a lot! Bugs are pretty cool. 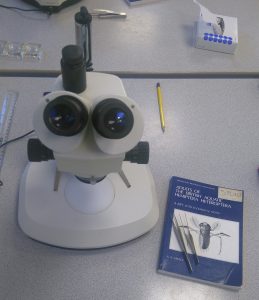 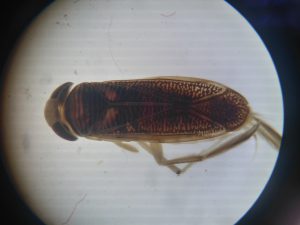 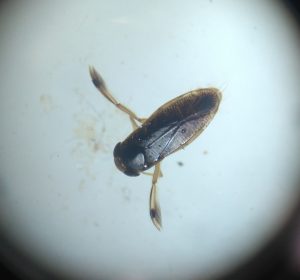 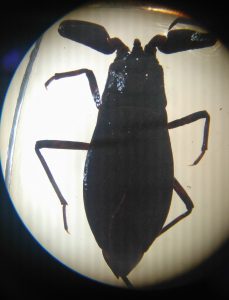 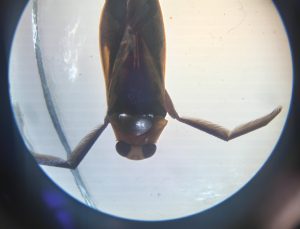 If all that wasn’t enough to keep me busy, I have been continuing to help with school sessions, getting involved in TCV’s volunteer days and also found the time to write an article for New Nature; a fantastic online magazine which is all written and produced by young naturalists.  My piece about the Marvellous Mud Snail project will be featuring in their June issue, so keep an eye out for that!

That’s all for now –  if you can’t wait til next month for another blog, keep up with me on twitter @_beesandtrees 🙂