You are here: Home / Uncategorized / Arachtober

It is the spookiest time of the year, apparently. October has been known as Arachtober for nine or so years now by arachnologists and anyone interested in eight legged arthropods. They use this month to flood twitter, fickr and other channels with arachnid photos/facts in order to get a few more people interested in arachnids and to try to stop them from having such a “spooky” reputation. It is also that time of year when most people tend to notice more spiders in their houses and webs seem to appear in the corners of every room. It’s also the time of year when those people lacking webs feel left out and go about sticking fake webs up for “halloween decorations”. Seeing as there is abundance of spider webs at this time of year, it seems like a good opportunity to talk about webs. If you know what sort of web a spider came from (if it came from a web) it helps a lot when you’re identifying them!

A guide to webs in and around our homes

1. Not all spiders make webs 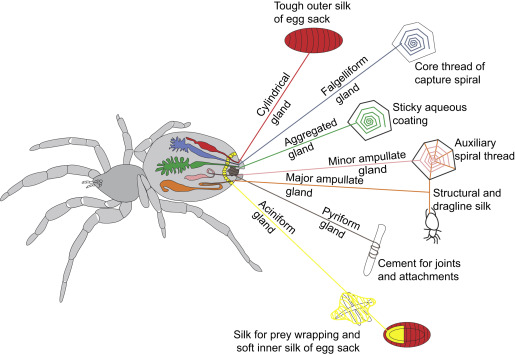 2. The web that everyone associates with spiders is called an orb web

The classic circular shaped web we’ve all seen in our gardens (and the one that seems to always be on halloween decorations/costumes) is the orb web. Spiders belonging to the orb web or orb weaving families Araneidae (orb weavers) or Tetragnathidae (long-jawed orb weavers)  produce these webs. 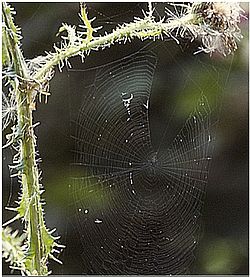 If you happen to see an orb web in your garden with a missing section, it’s not that it’s not quite finished yet, it belongs to a Missing Sector Orbweb Spider (Zygiella spp.) The missing sector is where the signal thread is placed (the thread that leads from the web’s centre/hub to the spider’s retreat, where the spider spends the daylight hours). When a prey item hits the web, the spider feels the vibrations along this signal line, then rushes out to deal with it. The missing sector is thought to allow quicker access to the hub from their retreat to catch prey. During the night the spider emerges and sits in the center of the web.

3. The messy cobwebs in the corners of your ceiling are not old orb webs, they’re meant to look like that. 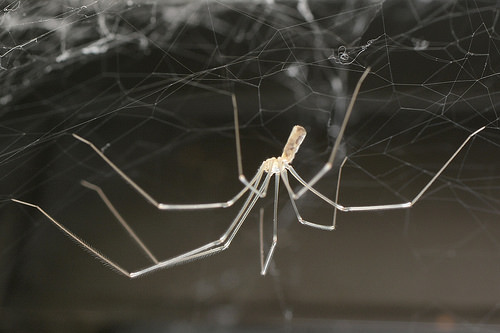 The web of the Daddy Long-legs spider are generally an untidy tangle of silk in which the spider usually hangs upside down. These webs frequently found on ceilings and in/behind cupboards These spiders are opportunist predators and take whatever prey comes their way, including other spiders. These spiders are sometimes confused with two other groups of long-legged invertebrates, which are also referred to as ‘Daddy Longlegs’. These are the harvestmen which also have eight legs but appear to have one body section (unlike spiders which have two) and craneflies (insects with six legs, three body sections and a pair of long wings). However, only the Daddy Long-legs spider builds a web. 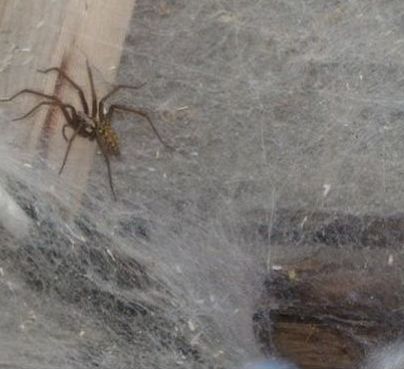 These webs are a familiar sight in our homes as they’re made by one family of spider which includes the Tegenaria  species (house spiders).  Funnel webs looks like sheets of webs made up by a dense criss-cross of silk with a retreat  in the corner.

These webs can outlive their creators and may even be refurbished by several occupants later on.

These spiders are seen running across the floors in houses more often during the Autumn because the males are on the search for a mate. It’s not that they’re “coming inside” at this time of year, they’ve always been there but they’re just more active at this time. If you try to put them outside, they’ll try to come back in. They won’t harm you and they help get rid of flies and other household pests in your home so please don’t squash them if you see one. 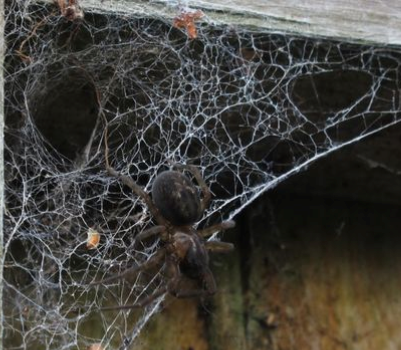 These are the untidy looking webs usually found on the outside of houses and other structures. These webs are made with criss-crosses of silk, similar to the funnel webs of house spiders but not as dense. Lace webs are also usually built around a central retreat rather than a corner retreat. Lace webs are made by the cribellate (lace-weaving) spiders, Amaurobius spp . They tend to have shorter legs and are more robust looking than house spiders. 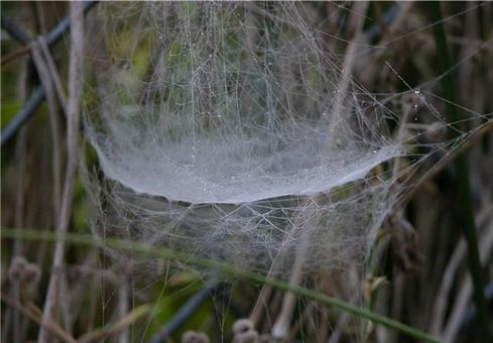 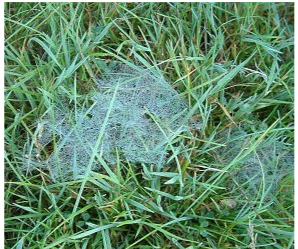 These small hammock webs are built by the 300+ money spiders (Linyphiidae family) we have in the UK , this is the largest family we have. The web consists of a domed, usually horizontal, sheet of silk sometimes supported above and below by ‘guy ropes’. The upper guys help to intercept flying  insects, which fall down onto the sheet, below which the money spiders lurk. These hammock webs are frequently seen on grass and other vegetation, but it’s much tricker to spot their inhabitants.

I hope this was useful!