You are here: Home / Uncategorized / A Belated Blog : Part I 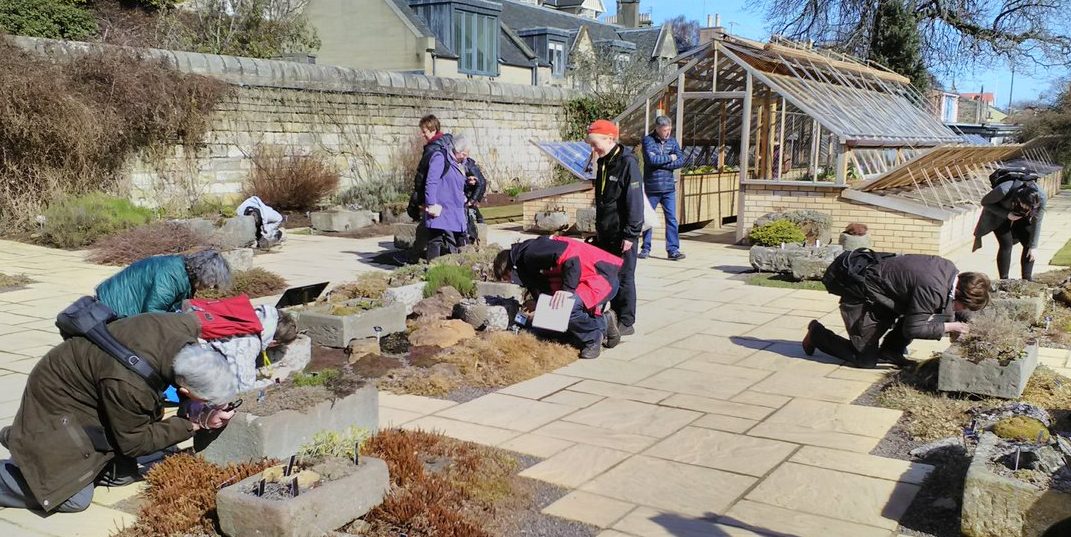 So I have made this an EXTRA long edition to make up for the absence.
To start we have to venture back in time to the start of summer ’18…

In a grandiose fashion, the last Lichen Safari was attended by hordes of intrepid lichen lovers (about 25). The sun shone down through cloudless skies as the group purposefully wandered from Lichen hotspot to hotspot. We numbered so many that at points a gaze in any direction returned views of people slumped, eyes pressed to lens and face touching floor. Others, struggling to contain their excitement, retreated to the outskirts of the group and chatted frequently on the various shapes and sizes of Lichen anatomy. A scene familiar to many a Friday night disco….

The Safari soon came to an end, an hour never seemed to go by so quickly. The group slowly dispersed with hand-lens clamped close to their person, each now fully equipped to share their knowledge of these little Lichens.

It was wonderful to meet so many people over the Safaris and I hope to run many more events like it in the near future. So listen out for more events coming soon! 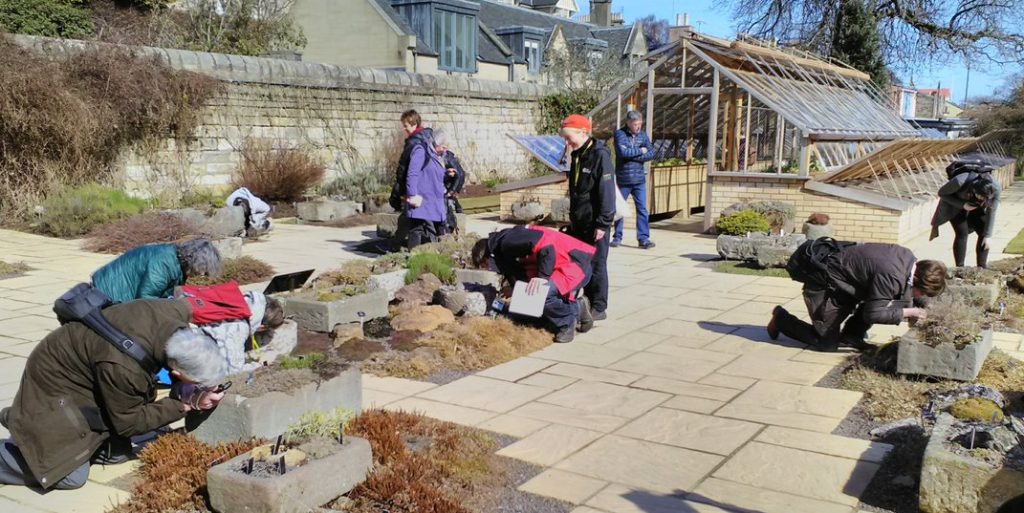 Some say that I exaggerate slightly, I prefer the term “Stylish Embellishment”. I think my description gives a fun impression of reality.

That’s Quite a Bit of Seaweed

Imagine if you can!

A mound of seaweed heaped on top of a stout table. The mounds dimensions large enough that if a small pet or child was to leap into it, the time taken to find them would be considerable.

The collection contains seaweeds of all colours, shapes and smells. From wispy green and red, tissue-thin weeds that fit snuggly into the palm of your hand to LARGE brown Kelps that you could drape over your shoulders like a thick, somewhat moist, knee length rain poncho. The smell rising from this iridescent hillock wafts out in all directions, greeting passers-by and encouraging them to follow their nose.

If they succumb to curiosity they would find a rather handsome trainee sat amongst the seaweeds, looking very happy with himself… 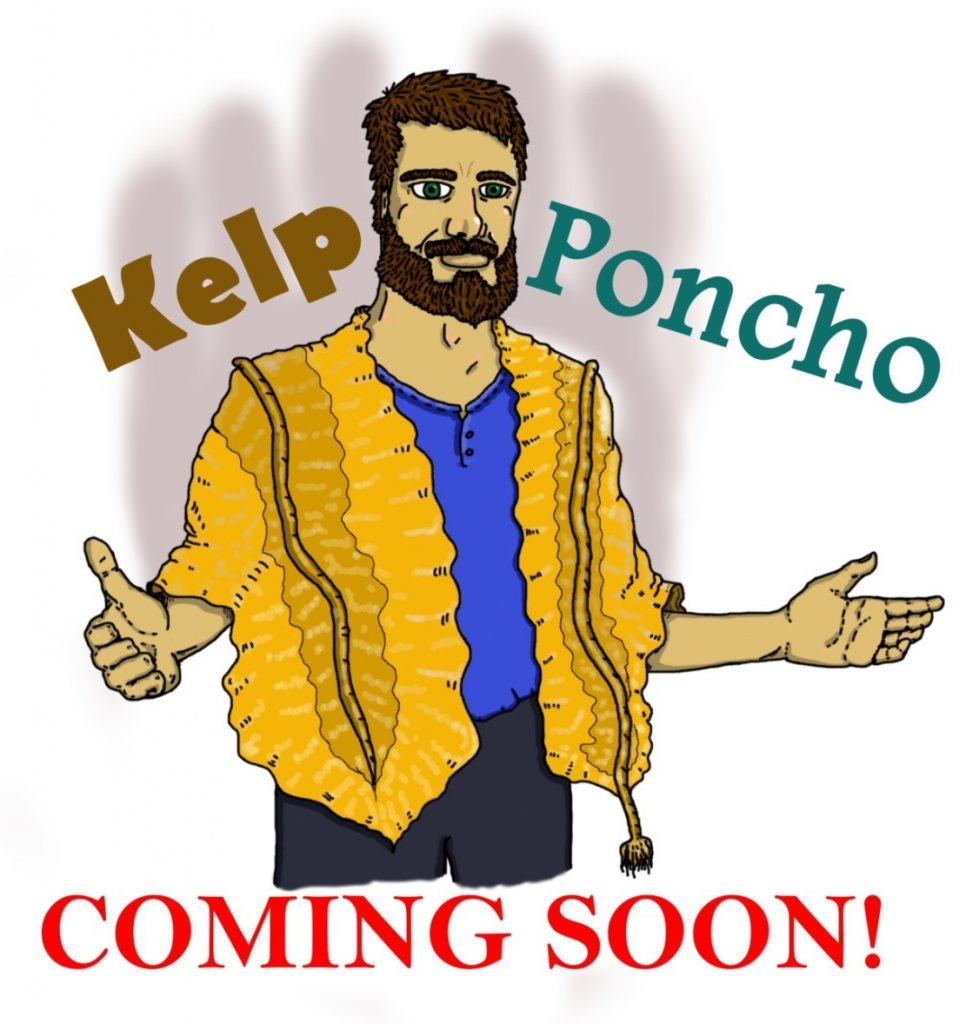 You never know a “Kelp Poncho” may soon be the fashion, moistening the necks of the rich and famous…

I spent most of the day with the seaweeds, sharing all of my meagre knowledge with the many people who wanted to know more. From young to old and loud to shy, all delved their hands into the shimmering pile, getting sticky with the “icky” seaweeds. All of the questions were great fun to answer and I hope many will now look at a beach full of weed and see more than just slip-inducing pebble fodder.

The day was a part of the Edinburgh Shoreline project which is currently hosting an exhibit in the John Hope Gateway at the Edinburgh Botanical Gardens. It showcases all manors of marine related goings-on in Edinburgh, everything from seaweeds to fisher-wives’ choirs. Head on down if you have the chance!

Plundering the Ponds of Pollock Park

After a good scrub to remove the odour of seaweed, I soon found myself rather removed from the shoreline and its salt goodness, to Pollock Park in the midst of Glasgow.

I was there to help with an event being run by fellow trainees Kirsty (now part of the trainee alumni) and Jo, which involved exploring everything “BUG”. From pond dipping to bug-hunts, our merry group stretched their legs and sharpened their ID skills from one corner of the park to the other! 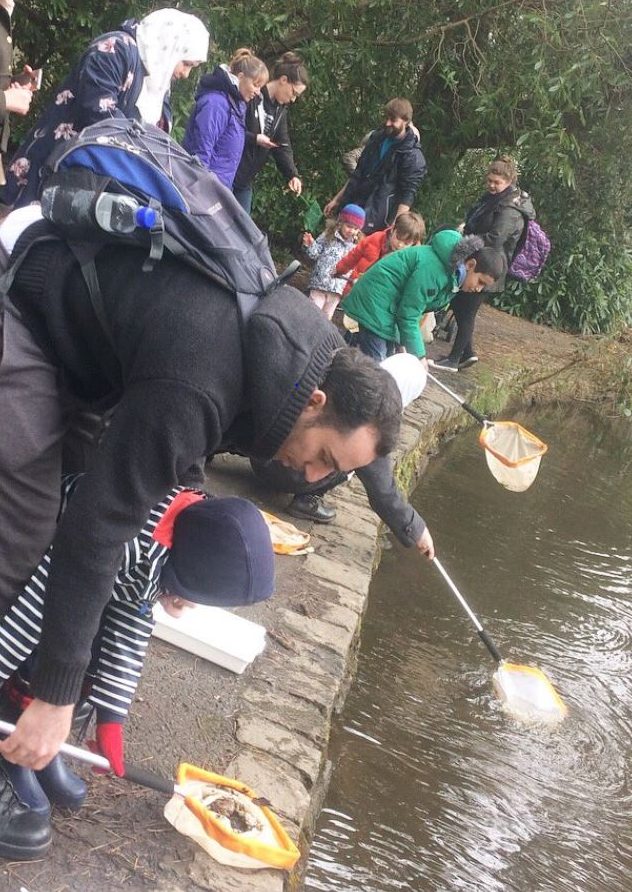 Nets at the ready!

Many bugs were hunted down. The ponds produced numerous fly larvae, water beetles and even a few mating toads (which younger members of the group were convinced were very friendly and “Just” hugging each other…..).

Back to Edinburgh and to its coastline I journeyed, to the sunlit cove that is home to Cramond Island. Although the tide did not permit a visit to the island without a lengthy swim it provided a dramatic backdrop for a day of learning about Bumble Bees.

It may surprise you, but there was an inexhaustible flow of Bumble Bees of all species moving along the shoreline. We spent a considerable period of time observing the bees as they flew past us, at glorious speed if assisted by a tail-wind or nausea inducing swirls if buffeted by a head-wind. The challenge of discerning a bee’s species from its colour-banding and quirks of anatomy, was made all the more problematic due to their unwillingness to remain still for any period of time.  I concluded that the bees knew what we were trying to do and like a toddler about to be photographed, they would move at the most crucial moment.

Our tutor had a remedy, an expertly wielded net!

I thought it removed the “Thrill of the Chase” and was not very Sportsman-like, but it was far more efficient in getting a close inspection of the bees in question.

Lichen Hideaway in the Highlands

Now I know what you’ll be saying!

“The Highlands are pretty far removed from the sea”.

And you would be very correct, even after climbing a rather large hill the sea remained somewhat obscured by more Scotland.

Everything the light touches is covered in Lichens, as far as the eye can see……

Yet I was there for good reason, I was attending a week long Lichen course at FSC Kindrogan to hone my Lichen knowledge. Days spent investigating hills, woods and boulders a many, evenings spent delving into the microscopic interiors of our quarry. The hours were long as we toiled over rock, bark and heather, spying lichens big and small, crusty and branch’y.

It was good to reinforce what I already knew about the Lichen-verse, but even better to learn more about just how diverse and wide-spread Lichens are.

I would like to thank the course leader, Dr Rebecca Yahr who invited me along for the week and has been teaching me the way-of-the-Lichens since the New Year, I have learnt a great deal and hope to learn more. 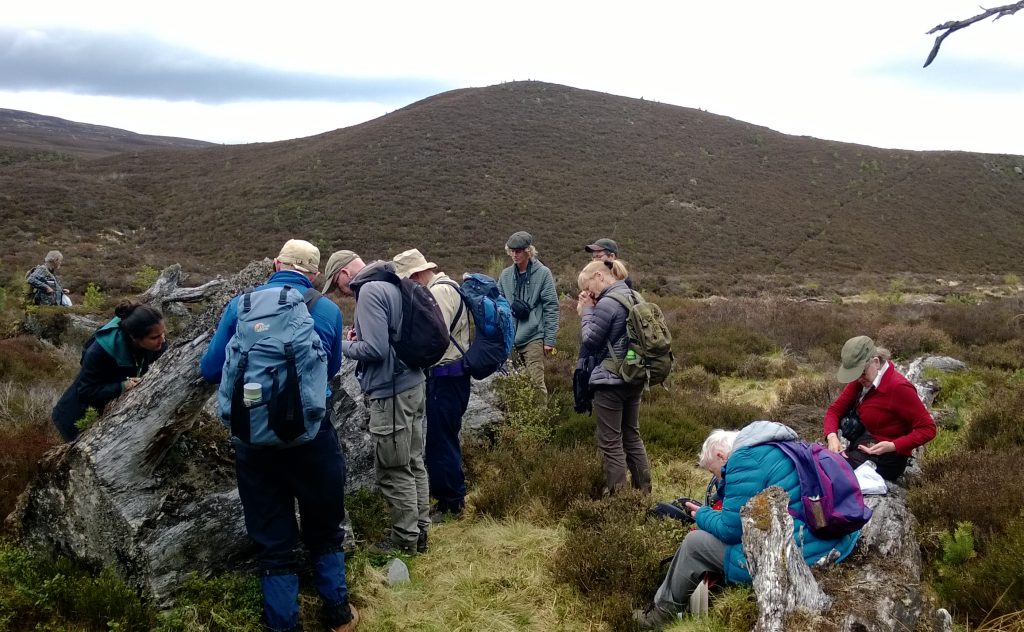 With fine weather at our backs, the slow “Lichenologist Plod” from fallen tree to boulder is a relaxing way to spend the day.

Most of June was spent over on the west-coast with SAMS (Scottish Association for Marine Science) wetting my appetite for all things marine.

I spent a couple of days out with the CoCoast team, practising their survey methodology and buffing the rust off the vault of marine biological knowledge I gathered when I was a young scallop at university (I graduated three years ago but a lot can happen in three years…). 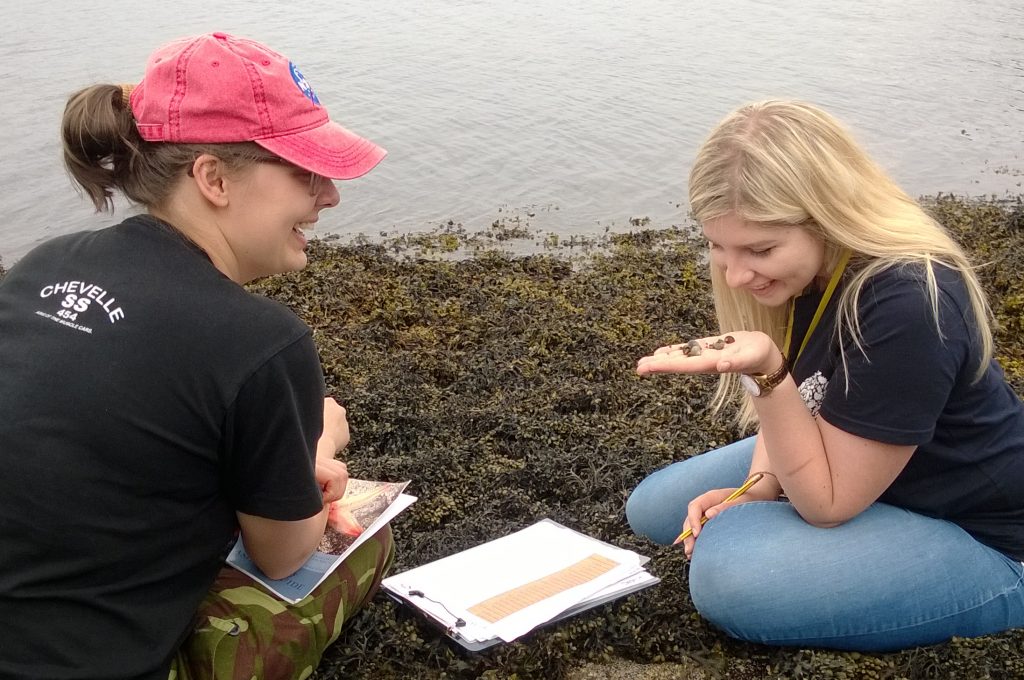 You can just see the excitement in their eyes! And if you were that close to a Periwinkle you would be excited too!

After a fair amount of “Weaselling”, I managed to gain a place on a Public Science Communication workshop for young researchers and spent another couple of days in Oban. The workshop detailed everything from human psychology to creative brain-storming of ideas and different ways of communicating a piece of information or message. I would like to thank everyone involved as it was a great learning experience.

Lord of the Flies – Trainee Edition

Between the many meandering trips to Oban, I squeezed in an outing with my fellow Natural Talent Trainees. We all came together at Loch Lomond to spend a night on the island of Inchcalliloch. We were the islands only bi-pedal inhabitants for the night, or at least we thought so…

After disembarking from the small ferry boat and waving “Goodbye” to civilisation, things remained quite civilised for a number of hours. We toured the island, setup camp and caught up with each other through endless chat. Then the midges started to descend and drizzle filled the air, we huddled around the campfire as a source of warmth and hot food. The embers slowly died and so snuffed out all notions of comfort… 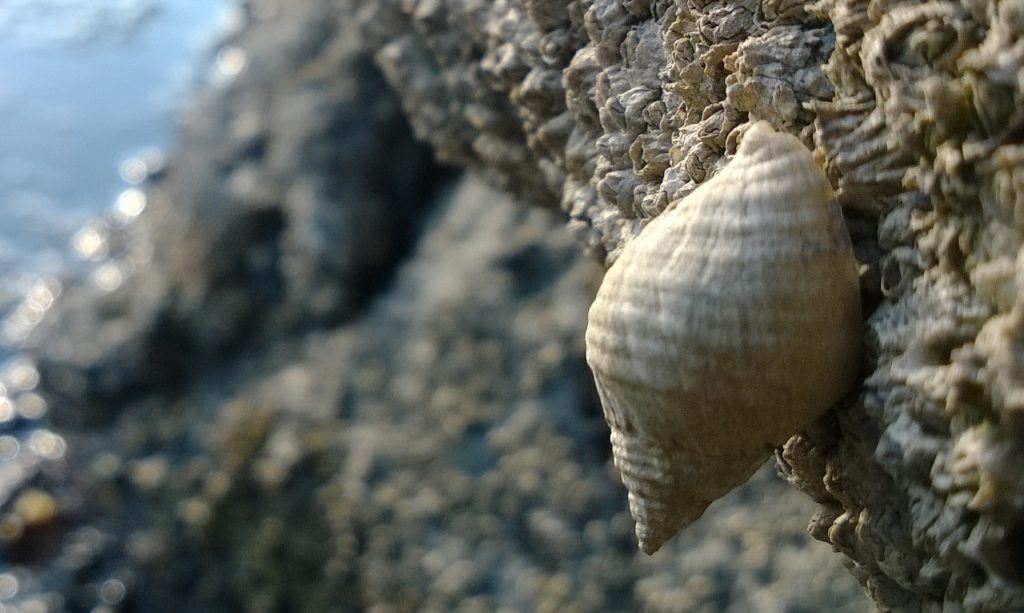 The All-Knowing Dog Whelk foretold and warned of the horrors that were to come.

We began to huddle together, rotating like Penguins in a blizzard to conserve warmth, midge nets began to be used as currency and eventually the chocolate ran out! In the chaos I managed to catch and befriend a moth. I called it Lawrence (I knew Kate would disapprove, but without chocolate my mental faculties were diminishing, fast).

Drizzle turned to rain and the island became engulfed in cloud. We stumbled to the tents with numb fingers and sodden toes. A leaky tent proved to be the last straw and resulted in bedding being flung from one side of the camp to another, we crammed ourselves into the few dry tents left to shiver out the night….