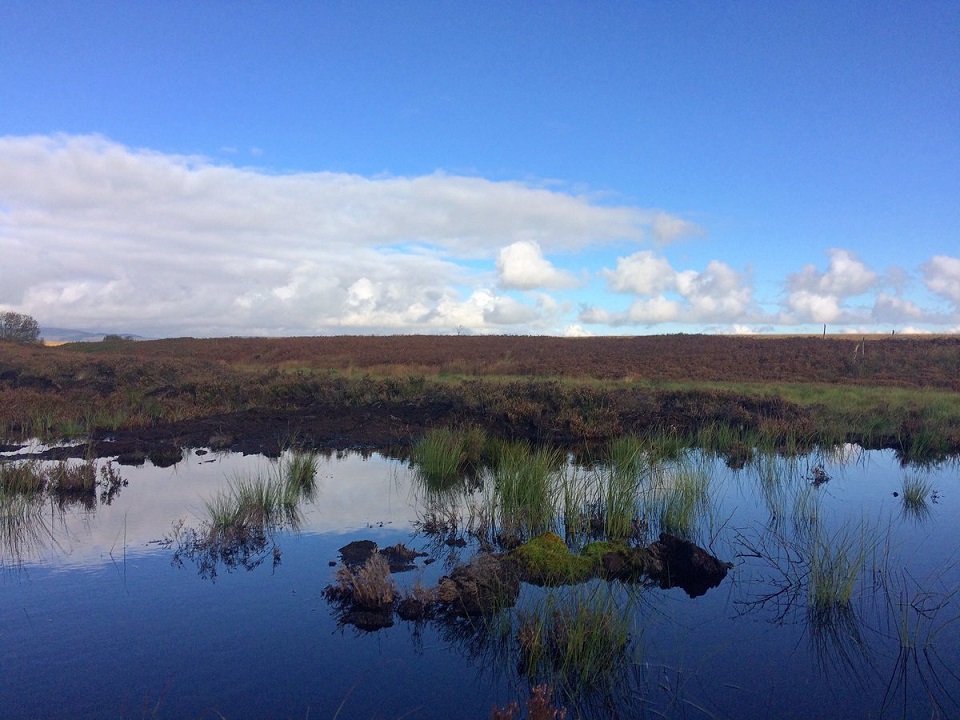 Where is the time going?! The theme of this month is TRIPS. There were lots for the last half of September and into October; some across the sea, some across borders and many around local places in Scotland. A huge high point that I had been working towards for a few months was the 10 year celebration event of Buglife Scotland in Scottish Parliament, an exciting night and a big success.

Another highlight from last month was visiting some Southern populations of the Pond Mud Snail in England. My colleague Ally and I went down to Cumbria to meet with Naomi Ewald of the Freshwater Habitats Trust who took us to one of her healthy sites at Skelwith Pool. We had an eventful drive, through the Kirkstone Pass in rain and thick fog. We made our way down the famous ‘Struggle’ – a narrow winding road of 20% incline, lots of German tour buses too wide for the road, and a few disorientated sheep not keen to move from the middle of the road.  Eventually we made it to the other side as the fog cleared further down the hill, I guess it wouldn’t be a road trip without a bit of drama. 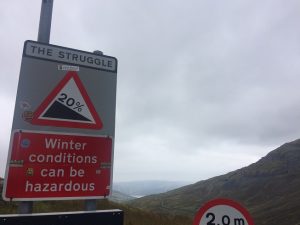 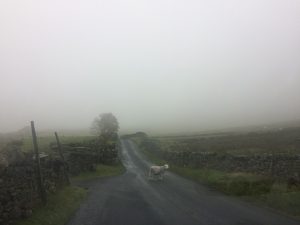 At the site we followed a one minute timed count survey method, sampling 10 times each for 2 seconds at different areas of the pond.  The results were amazing, and although the abundance of snails in the pond was a rare occurrence in terms of the overall population it was still great to see. Overall we had over 600 snails in the pool, my sample count alone was 326 snails!

It was great to meet with other organisations who are also concerned with the Pond mud snail and other freshwater creatures and the habitats they need to survive. The survey which we carried out in Cumbria will be the model that we follow to officially survey the Scottish ponds and hopefully we will collect some interesting data which can be used in conjunction to the findings down South. Freshwater Habitats Trust run a range of citizen science projects and surveys which can be found here.

Alongside visiting Freshwater Habitats Trust projects various members of staff from across the country at FHT have supplied specimens to contribute towards the RZSS genetic study of the health of the Pond mud snail population, I now have a total of five sites from across the UK to add to the study.

I was able to attend two brilliant training courses last month, one at the TCV Edinburgh office on integrating the Curriculum for Excellence with Outdoor Learning. I found this incredibly useful for designing lesson plans like I have been for Buglife, and for working with groups of school children and young people.  The second was a TCV course – Mammal Tracking and Monitoring which taught me so much, things that I’ve gone on to use with kids and adult groups and even in training courses of my own. Held at the Scottish Wildlife Trust offices in Cumbernauld it covered an introduction to tracking and recognising different mammal signs, and the different ways of surveying plus techniques for camera trapping, plus prints and hair trapping for small mammals. 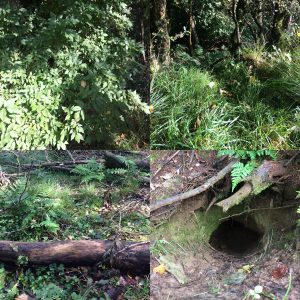 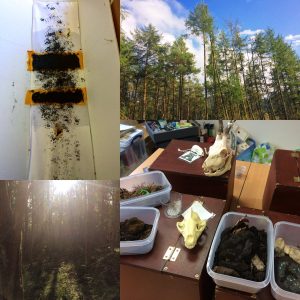 In the afternoon we took a walk to a badger sett in nearby woodland, which was an opportunity to use some of the methods we’d learnt earlier. Trying to track down the badger sett we looked out for some of the signs we’d been learning about: looking for elder trees nearby, following badger paths through the long grass, finding signs of repeated use over longs and branches, hair snagged on twigs, latrines and scratching trees. It was good to get out and physically look for badger clues, and signs of other mammals, being able to tell the difference between a warren, den and sett plus looking at camera trapping footage and realising how easy it is to monitor wildlife, even in your own garden. 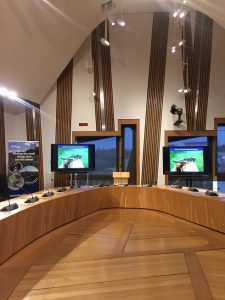 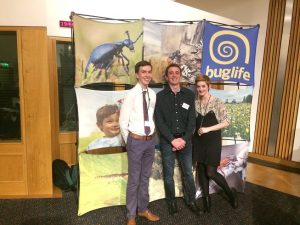 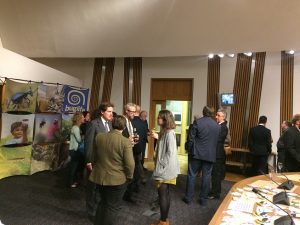 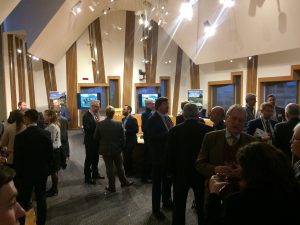 The main event of the month was Buglife Scotland’s 10 year anniversary celebration event plus a visit from member of the Board, a site visit to one of our peat bog project sites and a presentation session the following afternoon. This was a brilliant opportunity to meet the Board and to present on the Pond mud snail project. The event itself was held at Scottish Parliament as a celebration and showcase of the amazing achievements of the Scottish office in the last 10 years. Species champions, MSP’s, project partners, staff and board members all came together to celebrate the great work of the organisation and focus on stand out successes along the way – you can find out more about our top 10 species and proud moments on the Buglife website and by following on Twitter. 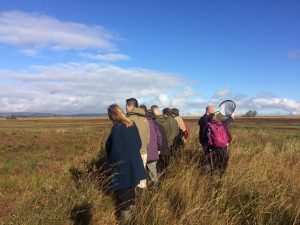 The Buglife Board of Trustees at Slamannan Plateau on their Scottish site visit. 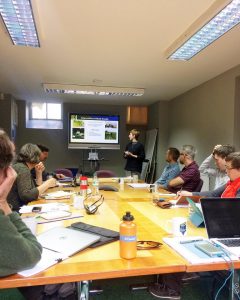 Presenting on the Marvellous Mud Snails project so far…

As a celebration offer the organisation have a special £10 membership deal until 31/12/17. Included in the cost is The Buzz- our twice yearly magazine, an eco-friendly cotton shopper bag, a Buglife window sticker, membership card, e-news updates and access to a members only access website area plus discounts and offers sent to your inbox.

Into October I was really looking forward to the annual BRISC (Biological Recording in Scotland) Conference which was held at FSC Millport, the Marine Biological Recording Centre. It was a beautiful trip taking the ferry across early in the morning, for what was my first ever visit to the Isle of Cumbrae. Fellow TCV Natural Talent trainee Aroa, who is based at the Botanic Gardens in Edinburgh was one of the speakers at the conference so it was a great opportunity to offer support and hear about her fantastic work surveying seaweed and engaging communities along the Edinburgh shoreline. 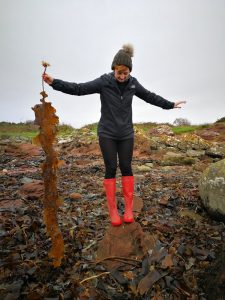 Each of the different talks over he course of the morning were fascinating- I particularly enjoyed Tara Proud speaking from the Marine Conservation Society on the various citizen science projects which the public can take part in to monitor and record the species found along the coast. Andrew Brownlow from the Scottish Marine Stranding Scheme gave an insightful  presentation on marine strandings and what they can tell us about the environment and health of populations, and indeed how important it is to report a stranding using the tools on their website.  There was a chance for chatting and networking before lunch and then an outdoor session on the beach where we looked at various seaweeds and shoreline creatures, and were given a demonstration on using the Capturing our Coast survey packs from MCS. All in all, a weekend well spent!

Thanks to the Esmée Fairbairn Foundation for funding this brilliant programme. Find out more about them here.