You are here: Home / Uncategorized / 3 Year Olds and 300 People – August at Buglife

Another busy few weeks have flown by, and there’s so much been going on that a half-way through the month blog was needed. It’s  finally been time to get stuck into the field visits to all the sites in Scotland where the Pond Mud Snail is currently found, plus summer events have been happening fast over July and August. I’ve been working with groups and nature enthusiasts of all ages from three year old nursery pupils to local families and keen nature recorders.

For Buglife I have also completed my first Scottish Invertebrate Update: the monthly e-newsletter with conservation news, job opportunities, talks and events from across Scotland. Email scotland@buglife.org.uk to get yourself signed up or read old issues here.

The first major event was one on behalf of Buglife and the Marvellous Mud Snails project at Polkemmet Country Park in West Lothian. The local council hold ‘Wild Wednesdays’ every week throughout the holidays and I was lucky enough to have brilliant weather and a huge turn out. Over 300 people passed through taking part in my pond-dipping activities and we even had a visit from the local papers, so I managed to feature in this wee article in the Daily Record. What’s even better was the amount of people I spoke to who took the time to find out about the project and were genuinely interested in the work Buglife and TCV do, plus I gained a few willing volunteers to help the captive breeding programme of our snails. 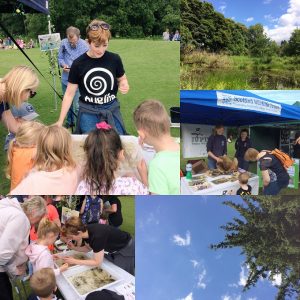 Out in the Field

It’s officially the start of the first lot of site visits, and having been on a few already I was looking forward to getting out and seeing more of the Pond Mud Snail in its natural habitat. Together with Conservation Officer, Ally, we travelled to the current sites and made notes on suitable release sites near-by and the ecological improvements which could be made around these to help populations in the future.

After an impromptu Friday afternoon dash to one of the historic sites in near Falkirk upon the discovery of some useful and little known information from 1912 no less, we were a bit disheartened to find that the conditions were too dry. We aim to try again in October when there might be some more flooding. At this particular site the snails were last recorded in 1917, so 2017 is definitely the year to make the re-discovery! 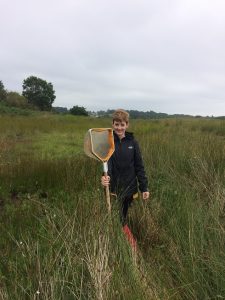 Next up was two of the current thriving sites in North Lanarkshire and East Dunbartonshire.  Making our way through fields surrounded by a scenic backdrop I had a bit of a ‘the hills are alive’ moment, and there was plenty to celebrate as the two ponds we were looking at had extremely healthy population of snails, which can be used in the captive rearing programme to safeguard the future of the species. At both locations we took specimen samples of the other pond-life to analyse any relationships between the Pond Mud Snail and the creatures which can share its habitat. 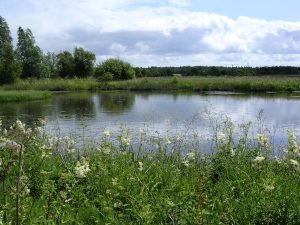 No snails were actually fried, but for the second lot of trips, we headed out on the hottest day of the year so far (coincidence I promise) to visit the Clackmannanshire and West Lothian populations. The clegs were out in full force as we searched for hours at Sheardale, but right at the end our efforts paid off as we discovered the population in a small patch under some tree roots. Another of the six current sites ticked off.

Unfortunately at our second location, with a vast grid reference and a site that hadn’t been visited in 15 years we didn’t have as much luck but we’ll head out again in a few months to try again. These opportunities are giving me the chance to visit ponds and freshwater habitats in various conditions and get used to the practicalities of site visits and field work, and I’m thoroughly enjoying them (the weather may  have contributed to this). 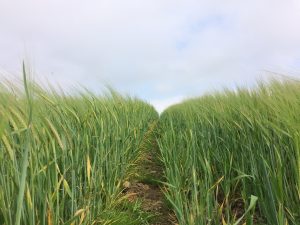 Do you know what a chrysalis is? 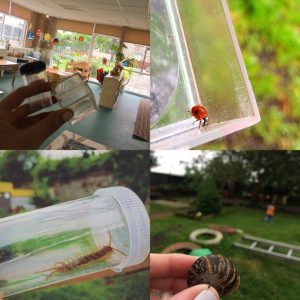 One of the community visits I made this month was to a local nursey in Stirling for a bug hunt afternoon with a much younger audience than I’m used to. I spent the afternoon at Baker Street Nursery with the age 3-5 year group, inside the classroom talking about bugs, playing insect themed games and then heading into garden to see what we could find. I was so impressed with their knowledge and the effort that the staff put into making every subject fun. There was a brilliant range of habitats provided for the children to explore which meant a great range of animal shaped homes where the kids found millipedes, centipedes, ladybirds, worms, woodlouse, beetle larvae and a few snails and slugs due to the rain that had been falling.

Before I left I was serenaded with some bug songs that the kids had been learning, and told that a ‘cocoon is what a moth comes from and a chrysalis is what a butterfly comes from.’ Never underestimate the brains of a three year-old…I left feeling suitably impressed and very happy to have met such enthusiastic kids. 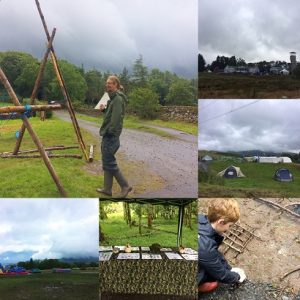 Next up was a big one – The Annual Scout Jamboree festival held at Auchengillan Outdoor Centre this year. This is huge event where over 800 scots and their leaders attend a week-long festival style event with hundreds of activities and trips being offered. I was there with my TCV hat on to help with wildlife and nature themed sessions and run, you guessed it, pond-dipping at the on site. The pond was tadpole and newt eft heaven but we also found some of the biggest great diving beetles I’ve seen and plenty of interesting beetle larvae.

I had a small life moment when I made my first fire at the event. I was helping at the TCV wild cooking station where we had popcorn and homemade bread cooked over the fires and made nettle pesto from the materials we could find. My other activities for the day included insect hunts around the forest with a group of enthusiastic forgeign Scouts and getting creative in the TCV HQ teepee with and hapa zome (hammering out the dye of leaves and flowers onto cloth to make natural dye!) and other craft activities.

So despite some of THE heaviest rain I’ve seen in the morning, the day turned out to be a success, I was completely exhausted- huge respect to the TCV staff who were there for the whole week.

Thanks to the Esmée Fairbarin Foundation for funding this brilliant programme. Find out more about them here.