You are here: Home / Uncategorized / Snails, Sunshine and more Snails, plus the benefits of being a Volunteer 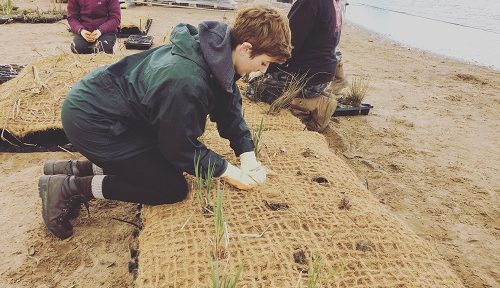 Seems like time is speeding away from me, it’s now the end of week three of the traineeship and the past 10 days have been crazy. I’ve spent a lot of time out of the office, meeting different volunteer groups and visiting some amazing things like the National Museum of Scotland Collections Centre in Edinburgh, basically an archive of everything that’s currently off-show to the public including historic records dating back to the 1880’s of my beloved pond mud snail, and meeting our captive rearing counterparts at Edinburgh Zoo.

I’ve realised that much like the TCV tagline (Join in, Feel Good ), the theme of the week for me has been to definitely ‘get involved’  and a huge part of this is with community projects and citizen science so more of this later. But first up, a snail update… 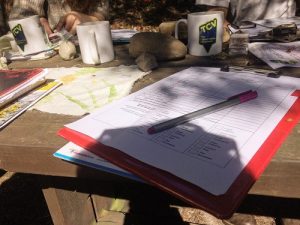 27th April  Day 4 – Before heading out with the TCV Volunteer group in the morning, I had a quick check on the snails. The middle group of youngsters are now 8 weeks old , growing  fast and eating faster. They are being fed on organic lettuce, making sure it’s free of any chemicals and definitely eat the most out of the three tanks.

28th April Day 5 – Today I was searching for new additions to the snail team, out at a historic site near Falkirk. As part of the project I will being heading out with colleagues to survey areas where the mud snail was once found, or habitat areas which are suitable to the conditions and could potentially have a population of pond mud snail. We came across many things out of the peat bog, hoverflies, lots of bumblebees, one particularly ‘bitey’ spider and a lone frog. It was too dry for snails however and the ideal pools and ditches they were once found had completely dried out. I’ll have to return after some rain! 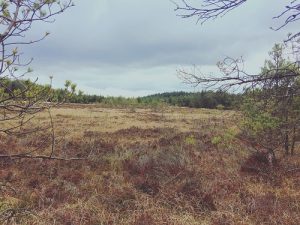 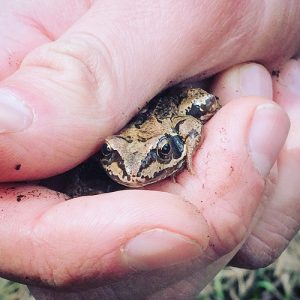 Instead we found frogs!

1st May Day 1 – BANK HOLIDAY MONDAY.  Snoozing and sunshine away from the office but no rest for the snails who had been busy emerging from their egg cases as I found out on my return to work. 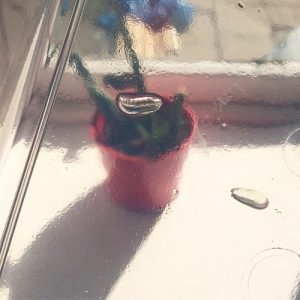 2nd May  Day 2 – Another day out of the office and this time to see some amazing historic records of the pond snail from the 1980’s back to 1880’s. Today was also a chance to meet the brothers/sisters/cousins of the current captive rearing population which we are looking after. The other half of this population are currently residing in the Conservation Department at Edinburgh Zoo, but that’s a whole other blog post coming soon. Meanwhile,  it was more of the same back in Stirling, more tiny fully formed snails were emerging.

3rd May  Day 3 – Time for a clean today. The adults are never-ending egg producing machines it seems. A total of 12 new egg cases in their tank, just as all of the older ones have fully hatched out. At a quick count there at 140 (!) newly hatched babies of 2 weeks to a few days old and 43 at eight weeks old, which means in the pond mud snail life-cycle they have about 4 weeks left until they start to become fully fledged adults, capable of begining to reproduce. 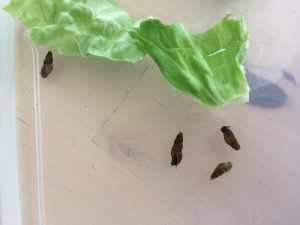 5th May Day 5 – Our 4 adults (who, just for the purposes of this diary I’ve named Biggest one, Biggish one, Smaller and Smallest )  collected on 21st January , have laid a further 3 egg masses in the last two days, taking it up to 15 new lots of babies waiting to emerge.

Typically in their natural environment the adults would produce the masses of 10-30 in Feb, we’re finding that the warm and safe captive environment is speeding up the reproduction process of smaller masses at a more frequent rate.

During the year I hope to be equally involved in TCV events and activities for Buglife. I went out this week, for the first time in a TCV capacity, with one of the volunteer groups to help with habitat creation at Hogganfield Loch in Glasgow. This activity runs every week as part of the Seven Lochs Wetland Park project, which aims to create Scotland’s largest urban nature park, across seven lochs (who’d have guessed) five local nature reserves, a country park and one of Glasgow’s oldest buildings at Provan Hall.

Several local groups have been helping to creating new floating islands, called Bio Havens, specifically created to attract nesting bird populations and increase wildlife visiting the area. This is a great idea which will hopefully connect the people who use the Hogganfield site with species they may not have come across before.

Some of the earlier completed islands already have Grebes nesting on them, and over the course of the day, lots of people stopped by to ask about what we were doing, what animals we’ll provide homes for, and generally sounded incredibly supportive.

Lots of conservation projects benefit both the species they’re designed to help but also us human beings too. The day was a lot of fun, with great laughs and lots of hard work. A work-out, sun tan plus helping the environment in one day. It’s aimed at all levels and all are welcome, I would HIGHLY recommend getting involved once a week/ fortnight to a local volunteer programme, and it doesn’t have to be in the conservation sector. Whatever you choose, it’s a huge boost to the charities involved, and I can guarantee you’ll feel much better in yourself for giving up some free time for a cause. The satisfaction of seeing the results of a days work make it all worthwhile. For Seven Lochs get in touch here, and TCV here. 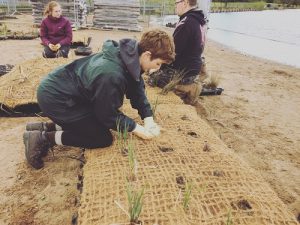 Getting on with some planting!

It was also an introduction to aquatic plants for me, most of which has been dug up at various Glasgow locations and transported to Hogganfield. On the huge rafts, topped with hessian, holes had been pre-cut: it was a case of ripping through the covering, reaching right in and locating the holes to pot the plants in their new home. It was a bit like birthing a cow to start with… but a lot of fun.

So if you ever find yourself with a large pond, no bird life and the desire to create a floating island, here’s what to begin with:

A huge amount of volunteer time has gone into the creation of these habitats, if you’re ever over at the park, which is also a Nature Reserve, keep your eyes peeled in the centre of the pond for the new floating homes. 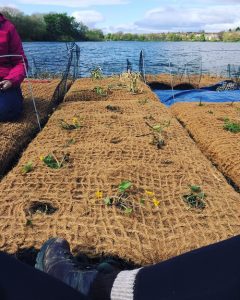 I was back in snail mode, complete with red wellies and waterproofs on what turned on to be an unusually hot day. I went with one of my Buglife colleagues Scott to survey a historic site near Bonnybridge where the Pond Mud Snail was last recorded exactly 100 years ago, November 1917. Unfortunately we didn’t find any snails out on the quaking bog site at Loanfoot Moss, BUT the temporary pools and ditch habitat that we did find near the recorded area looked perfect. 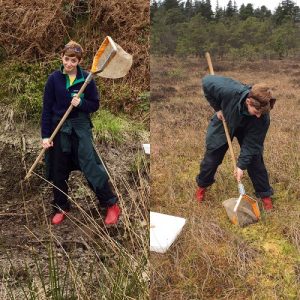 Surveying with pond nets for the mud snail (and being unsuccessful!) Digging in just below the surface where the quaking bog was holding its water.

It was a warm day and the areas had been hot and dry for some time, the pools had completely dried out making it impossible to search for the snails, who could be up to 6cm down, buried in the mud keeping inactive until the water comes. However, for me it was a great introduction to surveying specific habitats, in this case, a peat bog and its related plant and animal species, all surviving in low nutrient, high moisture environments 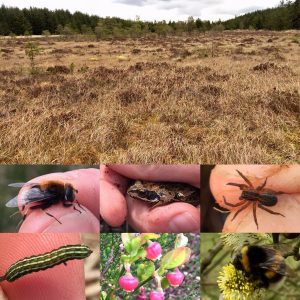 A dried out pool made a perfect playground for a common frog, a heath rustic caterpillar fed on heather, lots of bog specialist hoverflies were around, plus white-tailed and buff-tailed bumblebees along the edge of the bog and into Drum Wood. While dipping for the pond mud snail a common lizard was spotted hiding away among the undergrowth plus a Pirate Wolf Spider (Pirata piraticus) with identifiable white spots on the abdomen. Wolf spiders don’t build webs for hunting but instead chase down their prey. When courting, the males signal to their potential female using a form of semaphore from afar. This prior warning is needed otherwise the female would probably go for the attack.

Loanfoot Moss, just by the tree on the left we spotted the lizard.

Bog navigation –  If, like me, you aren’t too sure how to plan your route look for the plants and trees that favour drier land. Common heather (Culluna vulgaris) likes to keep its roots nice and dry, so patches where heather is showing tend to be the safest to walk along. A quick ‘on-the-go’ snack might be available in the form of wild growing cranberry, lots of which we found at Loanfoot, but the rich berries like lots of moisture. Although the damp, acidic soil makes perfect growing conditions, cranberry heavy areas could be a bit more watery underfoot! 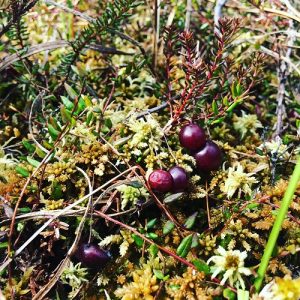 Lots of beautiful cranberry favouring the conditions of the bog

Looking out across the bog, tightly packed sphagnum and tell-tale tufts of sedge will also indicate an wetter area as both thrive on the damp conditions. Sphagnum can store water,  so this soft carpet tends to sink underfoot pretty quickly.

I’m looking forward to the next few months, where I’ll be visiting schools in local authority areas with my snails in tow, and running some pond-dipping and interactive sessions with the pupils.

Thanks to the Esmée Fairbarin Foundation for funding this brilliant programme. Find out more about them here