You are here: Home / Uncategorized / April and May: 4 C’s – conference, connections, convent and courses.

Hello again, I am now four months into my Invasive Species traineeship with TCV, CEDaR and the Department of Agriculture, Environment & Rural Affairs (DAERA). The two months since my last update have flown by as the majority of April and May have been spent out and about – 3 trips to England and Wales, 8 events, 5 training courses and numerous days exploring (and surveying) the Northern Ireland countryside. Indeed, a quick diary review revealed that I have spent 33 of the last 43 days out of the office! My exploits are therefore too numerous to describe in detail, but they can be summarised by 4 C’s – a conference, connections, a convent, and courses.

At the beginning of April I went across to Lancaster for the Young Thinkers Conference where I presented a paper on the use of Citizen Science in Conservation. Citizen Science has been heralded as a panacea for the Conservation Movement, with the potential to bring about a step-change in the resolution and quantity of biodiversity data; transform and reinvigorate how we interact with nature; and democratise access to environmental knowledge (Jepson and Ladle, 2015). However, I argued that Citizen Science, in particular Citizen Science apps, have so far failed to deliver the promised revolution and in some instances have actually hampered and diluted efforts.

The paper was very well received with many people both at the event and in the wider conservation sector agreeing that the number of different apps available, the absence of joined-up thinking, and lack of clarity about where data submitted goes, leaves no clear picture of how (or if) data is used.

The other delegates came from very diverse backgrounds (Health, Public Services and the Third Sector) and presented papers on a wide range of topics from out of body pregnancies; the ending of Kids Company; how to deal with the immigration crisis and the introduction of a carbon tax. This resulted in a very interesting and thought provoking conference. As well as providing valuable experience of public speaking, it was a privilege to meet such eloquent and principled people and engage in such intellectually stimulating conversations. I left inspired, with renewed confidence and vigor.

The other delegates and I at the Young Thinkers Conference

One of my main tasks at the moment is to research and write a position paper on the state of Invasive Species in Northern Ireland. I’m hoping to get a picture of what Invasives different conservation organisations and land owners are contending with and how they are managing these. This therefore entails going to lots of meetings and events and forming lots of contacts and connections.

At the beginning of April for example, I enjoyed accompanying Michael Topping and Greggor Fulton from the Woodland Trust to a Royal Forestry Society event they were hosting. The event was attended by many of the largest estate and woodland owners in Northern Ireland – they were given a tour of the Rademon Estate by the Estate Manager, Michael gave a talk on ancient woodland restoration, and we spoke at length about the importance of clearing Invasive Species from sites.

I also had a really interesting and illuminating meeting with Mark Horton, the manager of the Ballinderry River Trust. As well as learning about the Trust’s work managing Invasive Species I visited their hatchery where they breed River Brown Trout, Dollaghan Trout, and Atlantic salmon. The success of their breeding programmes for the globally endangered Freshwater Pearl Mussel and the globally threatened White-clawed Crayfish is astounding – in one tank (pictured below) there were more Pearl Mussels than in the whole river system and as they can filter 20litres of water a day, they are vitally important to the health of rivers. 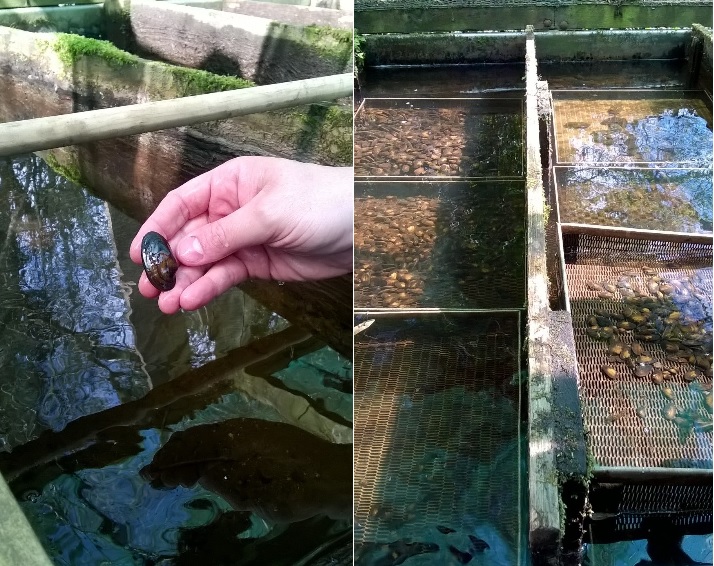 A convent (it wasn’t actually a convent but a priory but convent worked better for alliteration!)

Other events are more focused on raising awareness and increasing community engagement. One such event occurred at the beginning of May when the team from CEDaR helped out at the Benburb BioBlitz. Benburb Priory and Castle is a beautiful estate full of history which was greatly enhanced by the glorious sunshine we were lucky enough to have. The aim was to record as many species on site as possible. The 24 hours were therefore packed with lots of activities for both recorders and the local community from moth trapping, bat transects and butterfly hunts to a murder mystery trail for children. We were kept busy inputting data, with 322 species recorded and 528 records submitted so far.

A beautiful backdrop for the Benburb BioBlitz

Finally, a substantial amount of time over the last two months has been spent attending various training courses. One-day courses have included: Bumblebee ID; an introduction to different habitat classifications in Northern Ireland; writing management plans that are fit for purpose; and how to conduct JNCC Phase 1 habitat surveys. I also went on two longer 3-day courses. The first was in the safe use of pesticides. This course was back in Devon, so it was lovely to see my family and the beautiful weather enabled us to do a lot of the training outside so it felt rather like a mini holiday. I have also just returned from Wales where I attended a three day Field Studies Council course on Invasive Species Identification and Control.

June looks set to be as busy as its predecessors with lots of events, surveys and Invasive Species clearance events planned, so stayed tuned for more updates from me.