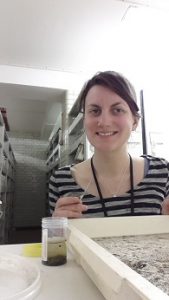 It’s been a busy and eventful couple of months full of snails, with things hotting up for the summer season. Here is your latest Mollusc update from National Museum Wales, Cardiff…

The 16th March saw National Museum Wales host the AGM for Cardiff Scientific Society. This was a great opportunity to show them the Mollusca section and the work we are doing, including talking to them about my traineeship. They were a really interesting bunch of people, who host a fascinating and entertaining set of lectures between October and March in Cardiff.

Later in March I headed off to Forest Farm Country Park near Cardiff to help hunt earthworms as part of the OPAL soil survey. I was amazed at how many worms came up, just from singing a silly song and dancing in a marked out 2m square area!

These past two months I’ve mostly been out and about enjoying the beautiful weather sampling freshwater ditches (reens) on the Gwent Levels. We have had odd days of heavy rain, but this has made sampling even better, as temporary drainage ditches and pools have been full enough with water to dip my net into. 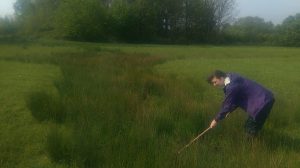 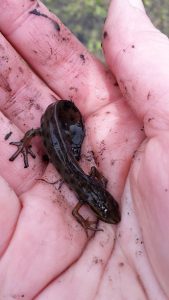 Both sites are also ideal habitat for Smooth Newts. Here’s a male I came across in full breeding dress.

The Gwent Levels is a unique area in Wales. In a country often associated with mountains and valleys, a flat expanse of land appears a rare sight! The area is made up of grazed land, crossed by a network of interconnecting drainage ditches; reens (large permanent ditches) and grips (smaller less permanent drainage channels). It truly is a “Living Landscape”, modified over centuries by human use and hosting a diverse range of incredible wildlife. The area is so wildlife rich most of it has been designated as a Site of Special Scientific Interest (SSSI).  My project in this Gwent Levels “Living Landscape” area is to look at the freshwater snails and bivalves present in these ditches at two Gwent Wildlife Trust sites: Great Traston Meadows and Magor Marsh.

The beginnings of Gwent Wildlife Trust started with Magor Marsh, after a small band of naturalists banded together, concerned about threats to the site, securing it as a nature reserve in 1963. The trust now manages 30 reserves throughout Gwent, many of which I’m excited to be visiting this year to search for molluscs. 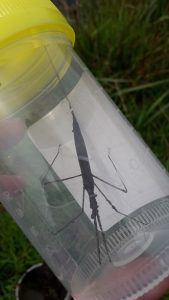 Magor Marsh is a truly stunning reserve, full of wildlife and known to be home to water voles. Signs of these were everywhere, though sadly the closest I got to seeing one was the characteristic “PLOP” of one jumping into the water. I was lucky enough to encounter Grasshopper Warblers, Kestrel, Common Blue Damsel Flies, many Orange Tip Butterflies and lots of other interesting non-molluscy wildlife that I tried not to be too distracted by!

Dipping my net into the water, I was thrilled by the abundance and diversity of the aquatic mollusc fauna. In some places freshwater snails were easily seen, and I was impressed at their ability in appearing to defy gravity, crawling along the meniscus of the water! 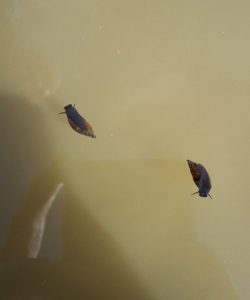 Classic land snail Cornu aspersum (Common garden snail). Can you see the eye at the tip and its second set of tentacles?

So how do you identify a freshwater snail?

Well, like all snails a lot of it comes down to the shape of the shell. Saying that, some soft features can also be useful at deciding whether something you’ve just fished out of the water lives there or has just fallen in. One group of land snails, the Succineidae (Amber snails) is particularly notorious for this, as they like to hang on plants at the edge of the water. Accidently brushing against these with your net can knock them into it, confusing the unwary surveyor! Floods and heavy rain can also wash terrestrial species into ditches, or catch species out in grips. One of the key features of telling if a live animal is an aquatic snail is to look at the tentacles. Land snails all have two pairs of tentacles with eyes at the tip (apart from two uncommon species). Unlike land snails, pond snails only have one pair of tentacles, with eyes either at the base of the tentacles or on a small swelling nearby. 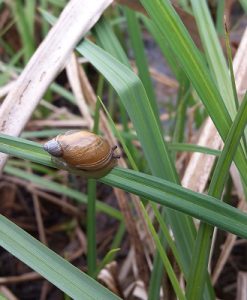 Succineidae sp. hanging out on some wetland vegetation

Back in February I tweeted about an amazing looking snail parasite that affect Succinea (Amber snails) and imitates a caterpillar… *Drum roll* Dr Ben Rowson and I found it on the Gwent levels!

This incredible parasite is the larvae of Leucochloridium paradoxum, a species of tiny flatworm. The larval stage uses Succinea snails as an intermediate host in their life cycle, with the aim to end up in the gut of a bird. The parasite relies on only a handful of species of land snail in the UK, but as many as 15 species of bird. Once eaten by a bird they can finally achieve adult form and breed, with the eggs passed out in the birds poo. The eggs are swallowed by the snail and hatch, eventually sending out brightly coloured mature sporocyst sacs up into the snails tentacles, making them swell up and pulsate hypnotically.

Some studies have shown that it can chemically castrate the host snail, making it unable to reproduce for a while – ouch! The parasite also appears to change the snails’ behaviour. Infected snails give up their nocturnal preference spending more time out in the open, often climbing trees and grasses, almost daring birds to eat them. The one we found was sat out in the open near to a dried up reen near Magor Marsh. Interestingly, in my video the parasite is only obvious in one tentacle, but after I put my camera away, it also appeared in the other tentacle too (see photo above).

While this is the beginning of maturity for the parasite, for the snail hosting it, it is unfortunately the end! The parasite has no effect on humans, and no noticeable effect on birds either. It’s just another fascinating quirk of the natural world – and one we still don’t understand fully, as we’ve no idea how it controls the snails behaviour.

During my background research for this project, we discovered that while there is guidance from Natural England and BugLife for sampling ditches for invertebrates, there is no set methodology for sampling molluscs alone. This was very exciting in allowing me do a lot of research and reading around to find out what methods other people have followed, and work out my own. We decided to take point samples from reens at locations spread throughout the site, comparing reens shaded by tall plants and trees against those that are unshaded. This is really important to find out if shading has an effect on which and how many species of mollusc are present. Gwent Wildlife Trust is keen to support and increase biodiversity, so this information could change or support the way they manage their reens. 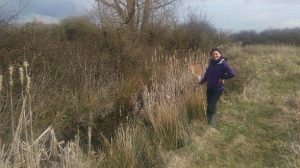 I took a combined total of over 60 samples from both sites, which now means I have lots of material to work through back at the museum! Each sample has to be carefully sorted so that even the smallest shell is counted and identified, so it should keep me busy for a while.

Surveying for a rare snail 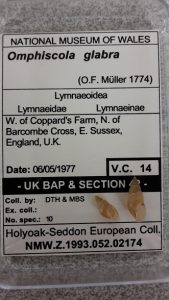 On 15th May I headed back to Magor Marsh for a Freshwater Snail training course with the Freshwater Habitats Trust as part of their PondNet project. I’m particularly interested in being involved with their surveys in Wales for Omphiscola glabra (Pond Mud Snail), a rare wetland snail that is in decline in the UK. This is a UK BAP and section 42 species, and is classified as vulnerable by the IUCN. The species is thought to prefer clean nutrient poor waters, including temporary pools and small ditches. I hope to be heading out soon with Freshwater Habitats Trust to some sites with old records for the species to see if we can find it there still.

Earlier this month I had a cheeky break from molluscs, and headed off to the Natural History Museum in London to spend the day learning how to identify earthworms with curator Emma Sherlock. This is a very under recorded group in the UK, prompting the recent launch of the Earthworm Society of Britain, which is trying to get people out and about to record earthworms.

My sampling on the Gwent Levels is now complete! Next it’s on to the other two Gwent Wildlife Trust “Living Landscape” areas: Usk to Wye, and Eastern Valleys.

In the meantime my diary has been quickly filling up with events over the past month, so see if you can spot me at:

Come and say hello and have a chat!

All photos and videos in this post are my own, please credit them as such.