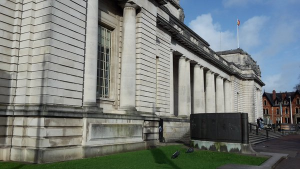 The public entrance to National Museum Wales, Cardiff AKA my new work place!

My name’s Imogen, and I am proud to be the Natural Talent Trainee focused on Non-Marine Molluscs, placed at National Musuem Wales, Cardiff. Expect an overload of information and enthusiasm for slugs, snails and freshwater bivalves over the next twelve months from me. I can’t say it enough: Molluscs are incredibly cool and a diverse bunch, the more I learn the more amazing they are!

For my first week of my new role I was whisked up to Scotland for an intense week of training in Health and Safety, Risk Assessments etc… not everyone’s favourite subjects, but the trainers did a fantastic job of making this important stuff interesting, fun and memorable. It was also a great opportunity to meet and get to know all the other Natural Talent Trainees and our sister programme Natural Networks trainees. Many of these will be based in Scotland, Ireland and other far flung places, so it was a great chance to do a bit of Mollusc promotion and get to know a great bunch of people before we end up dispersed around the British Isles. 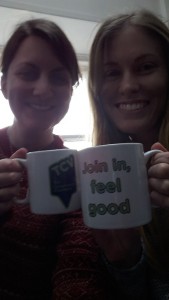 Getting to know my nearest Natural Networks trainee, Delyth (Right) who is based at TCV Tree Life Centre, Bristol

The highlight from this week for me has to be learning about OPAL’s Citizen Science projects, from identifying and using lichens to measure air quality, to surveying and measuring trees (check out the glamorous action shots below). Not only are their survey packs really simple to use, but they are great fun too! 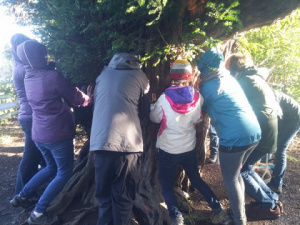 The 1st February saw me starting at National Museum Wales in Cardiff, an amazing place. Behind the scenes at a museum is a very surreal but interesting place! The staff corridors are like a confusing rabbit warren, full of twists and turns. Fortunately all the museum staff are incredibly lovely and forgiving of lost new starters, helping guide or direct me to the right place on the numerous times I got lost. How many people can say their office contains thousands of snail shells, all carefully ordered and labelled?? For me this is the best thing ever.

For my first week at the museum, I was set the incredibly interesting task of curating the museums British Slug collection. This was particularly exciting for me, as the FSC guide by Ben Rowson et al. (2014) Slugs of Britain and Ireland: Identification, understanding and control was how I first got into molluscs, and there I was being asked by him to curate the specimens he used for DNA analysis and to compile his book….! During this task I learnt a massive amount about Slug taxonomy and a couple of other odd facts along the way. 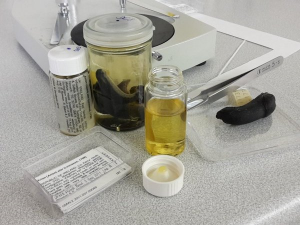 I had no idea some species of slug can ‘squeak’!

Did you know there are actually 46 species of Slug established in Britain and Ireland? We used to think they’re were 36, but the DNA work by Ben Rowson and others, linked to a re-examination of slug anatomy in museum specimens have confirmed that some species were being clumped together as one.

By the way, that count of 46 species also includes semi-slugs. What’s a semi-slug? Well… first there were snails and then they started evolving, many losing their shells completely or absorbing them in to their bodies (these remains of a ‘shell’ can be found when dissecting some slug species). I tend to think of a semi-slug as halfway through this evolution, they still have a shell, but it’s a tiny bit redundant as in most semi-slug species the animal can barely retract its body into its shell. There are three species of Semi-Slug in the UK: Vitrina pellucida, Phenacolimax major, Semilimax pyrenaicus. If you’re wondering “how come I’ve never seen anything like that??”… well adults only reach up to 16mm when extended, with shells about 4.5-6mm across, so they are fairly tiny and easy to overlook. This is especially true when compared with some of the larger slug species, which can reach 140mm in length. No wonder they grab people’s attention!

STOP PRESS!! In February 2016 The Journal of Conchology published an article describing the discovery of a fourth Semi-Slug species new to the UK, Daudebardia rufa, discovered in woodland near Caerphilly. This is most likely a newly introduced species to the UK, as it is previously known to be in eastern France and northern Italy. The large numbers found at the site indicates that it is breeding, but raises the question whether it should be considered a threatened species, or if it is a threat to our native invertebrates? 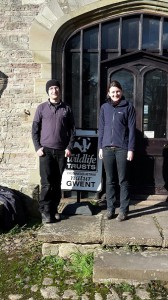 Meeting Andy of Gwent Wildlife Trust at their beautiful headquarters

The main part of my traineeship is to work with Gwent Wildlife Trust, carrying out a range of mollusc surveys and mini research projects in their “Living Landscapes” areas. The molluscs found there could reveal a lot about habitats and management of different sites. Early this month I met with Andy Karran of Gwent Wildlife Trust to find out more about their Living Landscapes areas. He provided me with lots of useful information on the amazing array of reserves and habitat types found in the areas – including coilery spoil (Liam’s favourite!), ancient woodland, marsh, ancient meadows, newly managed grassland, salt-marsh and many others. An exciting place to be working, now I just need to decide where to survey first and what my mini-projects will focus on (too much choice!).

Back in the museum, and it was time to learn some more curation skills, starting with data basing subfossil mollusc specimens found in Gwent by Monmouth Archaeological Society. These specimens were removed from a layer of marl, with other items from the layer (e.g. bones, charcoal and wood) being dated around 525-250 BC! Many of the shells were absolutely tiny, less than 10mm, and all were amazingly well preserved considering how ancient they are. The different species present reveal amazing details about the past landscape there; with species characteristic of slow-moving water bodies, wet woodlands, open marshy habitats, damp grasslands, and dry woodland. This suggests that the site could have been a mosaic of different habitat types, or show a succession from bare ground, to open marsh, to woodland. It’s incredible to think what handfuls of tiny shells can tell you about the history of a place.

It’s been an amazing first month, and time seems to have flown. I’m learning so much every day and having far too much fun! I look forwards to sharing more with you in the coming months.