You are here: Home / Uncategorized / Opening Doors To Success

So September has been awash with training courses, events, meetings, visits, HLF bid writing and of course the odd downpour but that won’t dampen a Natural Network’s trainee’s spirits.

The month began with 2 training courses run by TCV. The first was Exploring Nature with People with Disabilities which looked at innovative ways to allow people of all backgrounds to engage with nature and the second course was on Safeguard training. 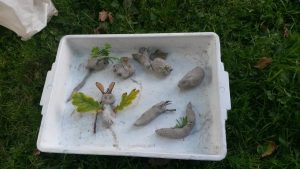 Paving the way with clay creatures 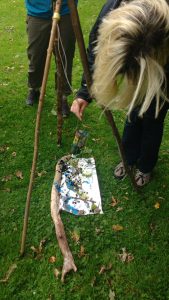 Anything but foiled attempts at natural art

Towards the end of the month I was also afforded the opportunity to assist TCV with a nature play session at Rouken Glen Park for children with autism.

A FEVA of Forums

It seems that September has been the month for a host of events. The first I attended was a Moth and Bat night at the Botanic Gardens in Glasgow courtesy of Butterfly Conservation and the Clyde Bat Group as part of the RSPB’s WildFest.

The second event this month was a conference on ‘Defeating the Invaders’ hosted by the Inner Forth Landscape Initiative looking at networking opportunities to tackle Invasive Non Native Species.

Next was the opportunity to pick up some ideas on environmental education through the Scottish Learning Festival held at the SECC. 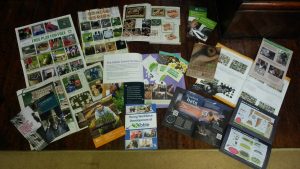 The very next day I then attended the Sustainable Health Conference at the Golden Jubilee Conference Hotel where there was a particularly interesting workshop presentation given by the Green Exercise Partnership on the use of Green Space for health and well being.

On a third consecutive day I then travelled through to Dynamic Earth in Edinburgh to attend the Scottish Land Reform conference which threw up some interesting challenges to implementing recent legislative changes. 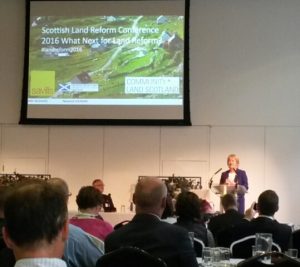 In the final few days of the month I was then lucky enough to attend the FEVA Forum held at the Concrete Gardens on the topic of Biodiversity and Community Food Growing. The day highlighted not only the natural heritage value of wildlife in the garden but also the economic and social benefits too. 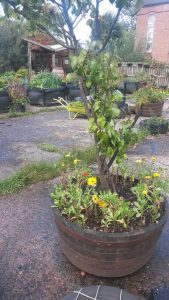 Definately a fruitful day at the Concrete Garden

September also saw continued work on TCV’s HLF bid and after a number of meetings on the progress I was unusually tasked with marking my bosses on their initial drafts, something that may come back to haunt me I wonder?

I was also asked by the Glasgow and Clyde Valley Green Network Partnership Development Officer to attend a meeting in his place on Habitat Improvements along Strategic Central Scotland Green Network Walking and Cycling Routes held by Scottish Natural Heritage. Daunted, not me, ahem 🙂 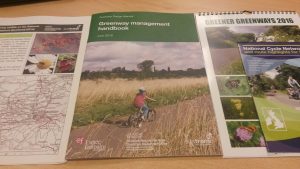 Following this I attended a meeting with the Central Scotland Green Network Development Officer and Glasgow City Council’s Flood Risk Officers on complementing or conflicting work’s programmes within the Yoker Strategic Delivery Area.

My last meeting of the month was with TCV’s Senior Project Officer for Community Rewilding at Inverclyde’s inaugural Environment Group. This was a great opportunity to promote the project and make contacts.

September is also the month of Glasgow’s Doors Open Day and although this is mainly a festival for urban architecture there is an increasing level of green infrastructure appearing within historical and modern building design.

Examples of this are the newly established nature play equipment at the Back Garden at Possil Health Centre, the ever increasing interest from local communities at the Woodlands Community Garden and the Roof Garden on the Glasgow City Mission building which provides some outdoor solace for it’s users. 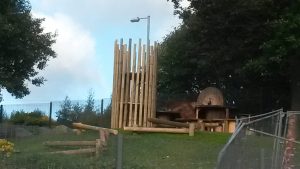