You are here: Home / Uncategorized / Bee Puns Are A-pollen 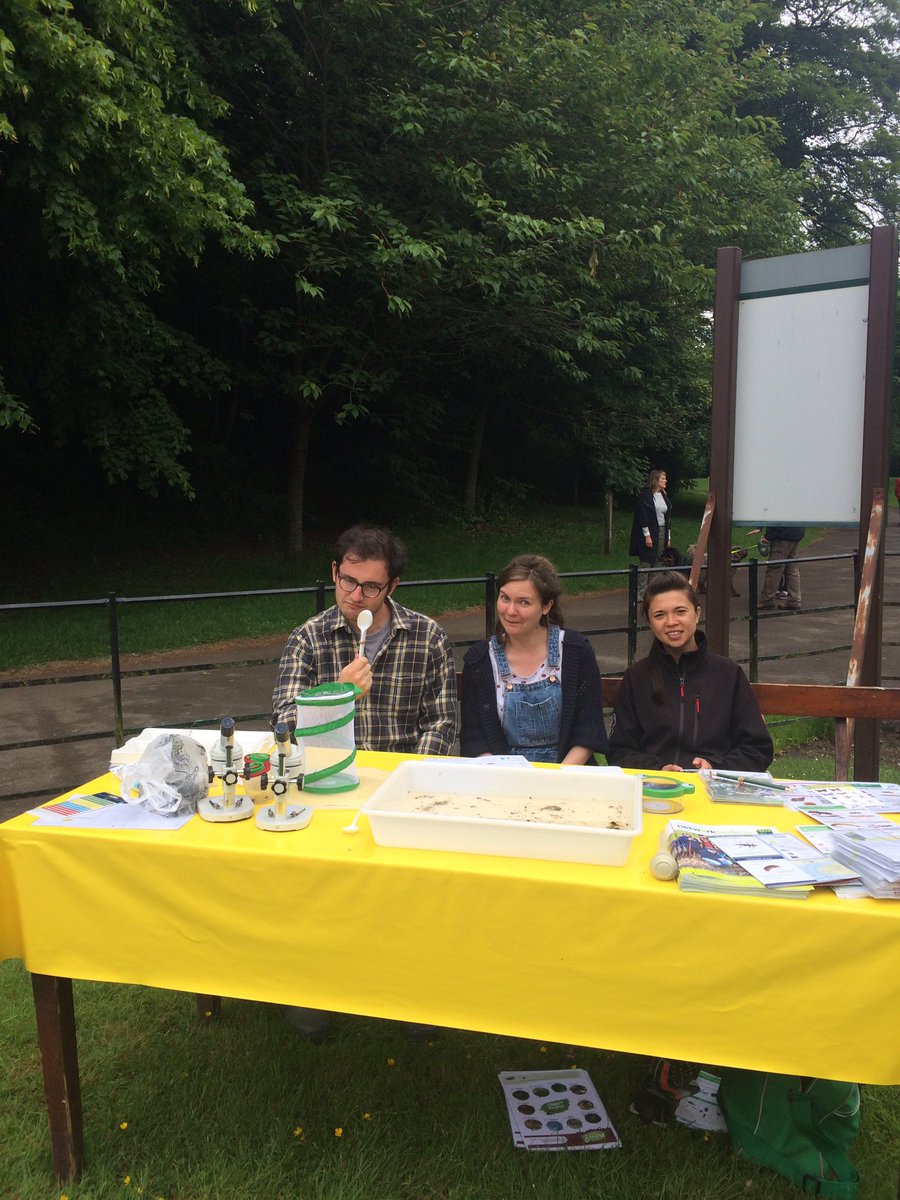 The past six weeks have been hectic. It feels like my feet haven’t touched the ground as I interpret wee beasties for all and sundry. Each day different than the last. And you dear reader are so lucky because I am about to amaze you with tales of daring do and sweep netting. You might want to get yourself a cuppa.
My first bug walk took place at Woodlands primary, Cumbernauld. They were an awesome bunch. We went sweeping netting in the local area and the pupils managed to catch a green veined white butterfly! The sun was shining and all the pupils noticed how in the heat butterflies where able to fly. We also found a solitary bee nest. I was so chuffed and couldn’t stop screaming with delight. The kids got a bit weirded out by this at first, but after explaining about the solitary bee life cycle and their awesome wee furry bodies, the pupils got it and we all ran around screaming with delight. Shouting aside, this proved valuable information for the pupils who have their own solitary bee nests in their school garden which they now know more about as a result of finding the solitary bee aggregation.

The next stop was St Augustines primary school. This was located next to one of my favourite places – the time capsule in Coatbridge! I was slightly disappointed to learn from them that the big dinosaurs had been removed but we found something to make up for it – a huge beetle grub! A few classes came out on the day but they were all very well behaved and they learned about the lovely park area that is only 100 meters away from their school and the importance of the buttercups in the area for the pollinators that visit it.

The day after was the school nature day in Robroyston. This day was a whirlwind. Groups were whizzed in and out as they surveyed different parts of nature throughout the reserve. They were in for a treat as the number of different invert species was off the charts! There was azure damselflies, green lacewings, orange tip butterflies, hoverflies, and my favourite out of them all – a click beetle! Finding the click beetle was truly hilarious, if you are a sad old bug walker like me. I showed the group the beetle, thinking it could be one of a few things. My hypothesis was confirmed when the beetle let out a loud click and landed right into my hair. Everybody let out a terrified wail and ran away while I just sat there laughing. After calming everyone down (and telling them that the beetle had had its fill of humans for the day) everyone could appreciate the defence mechanism used by this beetle and how effective it could be. The pupils had such an amazing time and it felt good doing a bug walk in Glasgow for a change, showing off my Weegie credentials to bemused school kids.

On the Friday I was at Kilsyth primary school. It is located next to a beautiful pond which is teeming with wildlife and wildflowers. It also has two prized swans which a bunch of the most adorable cygnets. The pupils loved telling me about the swans and sometimes how they flew into the fence around the school. As I pondered about how the queen might be licking her lips at that thought, I whisked the kids off to the pond. They had been learning about invertebrates in preparation for the walk. They kept on telling me fact after fact about the bugs. They were expert sweepers as well – they even caught an azure damselfly (these guys have the worst luck). I also highlighted the relationship between the wildflowers and pollinators especially that of the cuckoo flower and orange tip butterflies. We were even able to find some of their wee orange eggs on the flower! The kids were also amused at my pathetic attempts to catch a butterfly as I ran into a shrub.

I then went plug planting at St Maurice Park with Cumbernauld living landscape initiative. This fell under Buglife’s “North Lanarkshires Buzzing” initiative which aims to plant four hectares of wildflower meadow throughout North Lanarkshire. Keep an eye on that meadow, it will be a beaut!

My next visit was to Baird memorial primary school. This must have been one of the hottest days of the year. Next to the school is an amazing walk which is covered in the most amazing flora (and dock leaves). We found solitary bees just hanging out by some oxeye daisies. I did my customary overjoyed scream while the other kids were in amazement that 80% of bees live this solitary lifestyle. The kids highlighted how important this area was and how they also have a garden pond in their school. I also freaked them out by fiddling with some spit at the base of some tall grass stems but this wasn’t just any spit: this was cuckoo spit! It is made by leafhopper nymphs to protect them from drying out and because they were told it looks cool by some grasshoppers with a rubbish sense of humour. 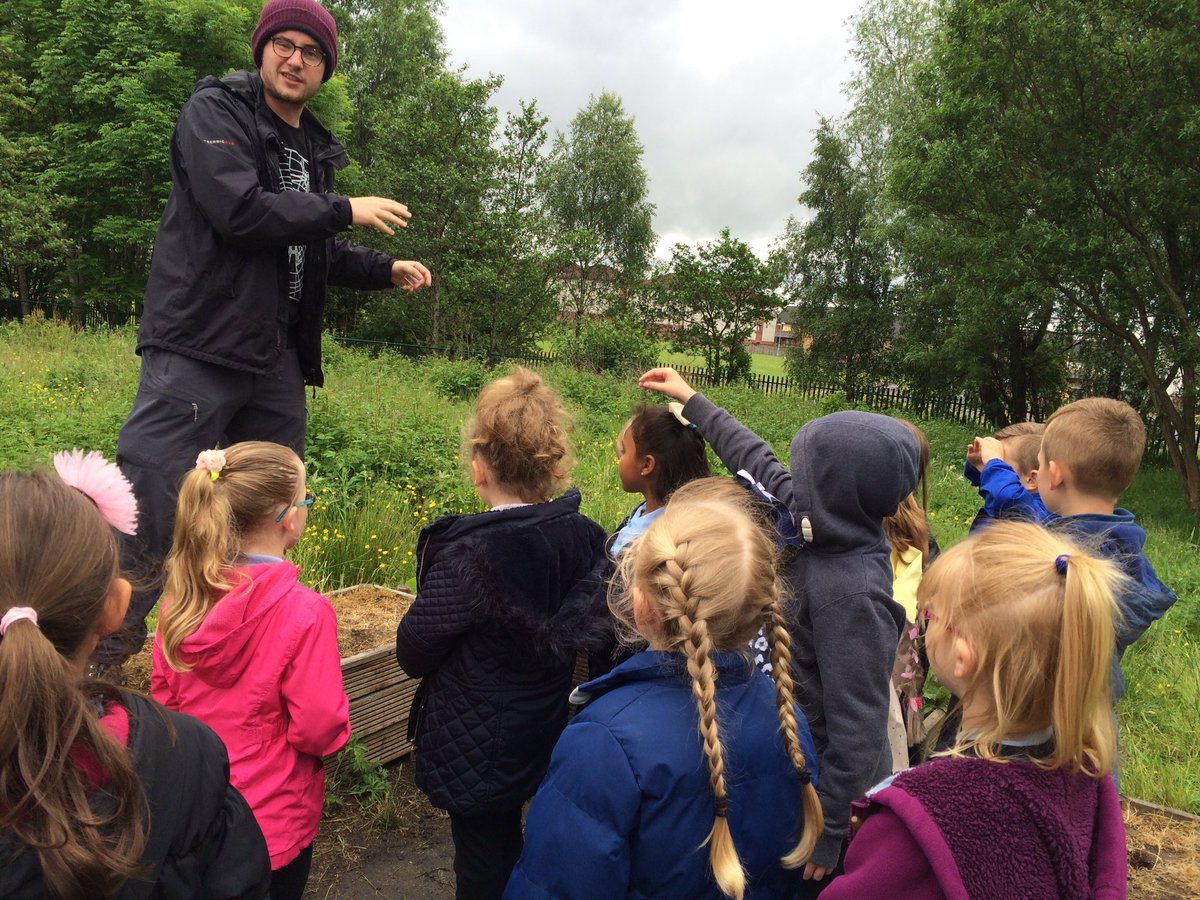 The next day involved going out with Kildrum primary. This was a school I had visited previously and given them a bit of help with their garden. This time I showed them around their local woodland. We also built bug hotels. And one group built the most beautiful hotel yet but I am afraid I forgot to take a picture so just imagine the Tahj Mahal but made out of leaves and sticks. The pupils learned that recording inverts in their local area is vital to knowing just exactly what is out there. It also highlighted the precariousness of grass lands to pollinators in an urban environment. Just as we were out sampling pollinators around the daisies and buttercups, a massive lawnmower came and cut them all away. I couldn’t help but show my frustration at how this could just happen but then the kids caught a seven spotted ladybird and I couldn’t help but laugh.

I was then called into action at the Friends of the River Kelvin nature day. I was helping out Amanda, Jess and Giovanna. We managed to catch a ton of wee beasties while kick sampling and sweep netting. My particular favourite was a horsetail worm which was massive (I have just seen one on Wikipedia that is coming out of a crickets bum – ouch). I also caught my first marmalade hoverfly of the summer – a wee Freddie mercury impersonator with its moustaches. We showed the public these creatures in the Kibble palace while also trying to compete with folk singing. Needless to say we managed to snag a bunch of visitors while also humming along to the tunes.
I then went with Giovanna to Deanburn primary school again. We created lovely ladybug lodges using just: bottles, cardboard and string. They are really easy to make, just cut off the bottom of a bottle, add cardboard then tie off the bottom and viola you have just made a ladybirds day! Although make sure none of the cardboard is sticking out the bottom of the bottle as this will make it damp and no ladybirds will want to live there. After making our bug hotels we hung them all throughout the glen next to the school while the kids told us what their favourite dinosaur was. My dinosaur was the coolest by the way.

I then went Petersburn primary in Airdrie. It was a dreich day with lots of midges hanging about. This did not put the pupils off though and we all had a great time seeing what we could find. The number of pollinators present was astonishing. We also discovered a number of wolf spiders with eggs sacks running about. The kids loved these beautiful spiders although they were really disappointed when they learned that a bite from them would not give you super powers. They were all wee machines with a sweep net and I cannot help but commend them for their perseverance when the weather rubbish; just powered through it. 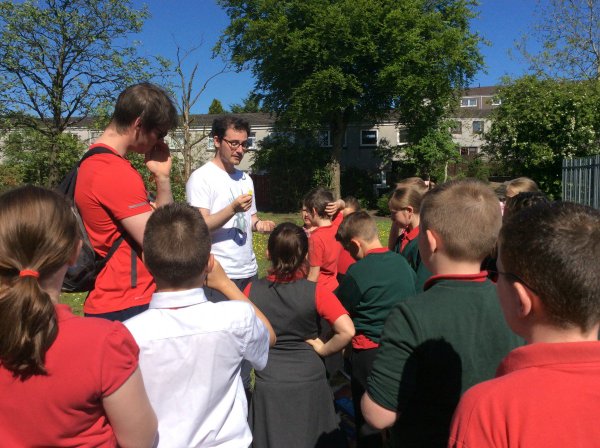 out in the sun with woodlands primary

The next week I took part in various events with TCV groups. I went to Gourock and helped out with land management tasks at a local green gym group with Rebecca the local project officer. This proved so much fun. The kids involved gave it their all and hacked away at a rhododendron, cleared a path, eliminated some shrub and had awesome chat. We also went for a nature walk around a local reservoir where we saw a number of immaculate species, my favourites being a painted lady and a ringlet butterfly. With Rosies midweek Stirling group I went to the Endrick River near Loch Lomond to remove what I thought was a few Himalayan Balsam (an invasive species) I was wrong – there was millions! The scale of the invasion shows you how dangerous balsam can be if left unattended. This is a long term project which needs funding to be successfully overcome. We spent all day uprooting it (destroying thousands of plants) and we hardly made a dent. The volunteers all had good fun though and we learned a great deal about these plants like how each flower contains eighty seeds (no wonder they spread quickly). I then went with Rosie to a local safari park at Blair Drummond to take part in a nature day. This was great fun as a local scout troop went bug hunting and did a bit of arts and crafts. The aim was to create an ideal pollinator. I created a “Santa bee”, he only stings the naughty while dispensing presents to the good. He also looks like Santa. As a bee. 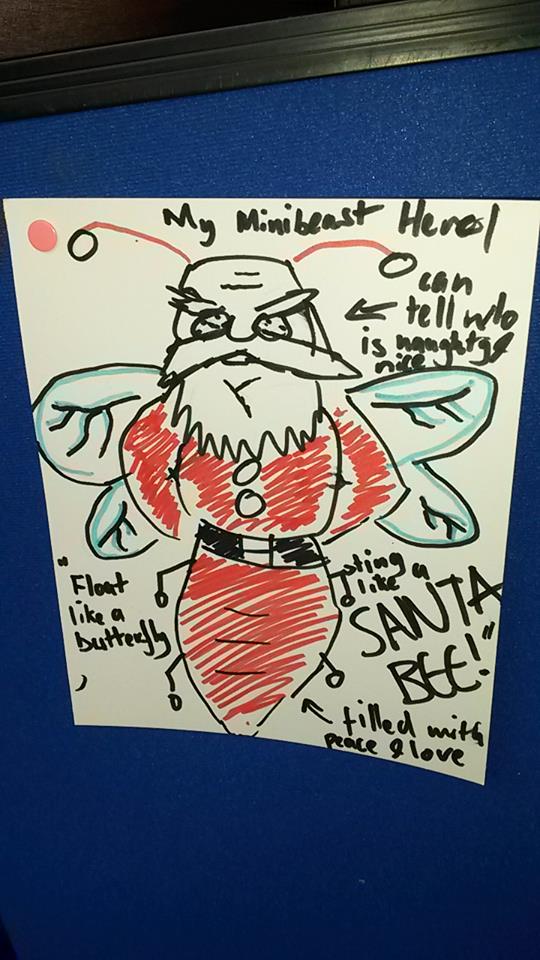 After all this work it was time for a well earned rest but what do I go and do? Walk the west highland way! Totally worth it. Seeing nature at the limits of your own endurance is quite invigorating. It also allowed me to use the skills I had gained in my traineeship: Looking out for invasives and rare beasties while motivating others. Straight after this I went on a wildflower and pollinator id course at Millport. This helped me to discern some of the more difficult wildflower species.

Finally I went down to the TCV centre at Skelton grange for a meet up with all the other trainees. We all had a few war stories to tell each other ; talk of projects, sedges and eels. We learned how each other was getting on, and then we told each other to calm down a bit. The BBQ was amazing but the quiz was too hard and we will never mention it again. My tent nearly gave way during the middle of the night but I think we all made it back in one piece.

In conclusion, this month has been a blur. I am exhausted just typing this blog, doing it was another level of endurance all together. I would definitely do it all again though but maybe next time I’d request sunnier weather and less running into shrubs. 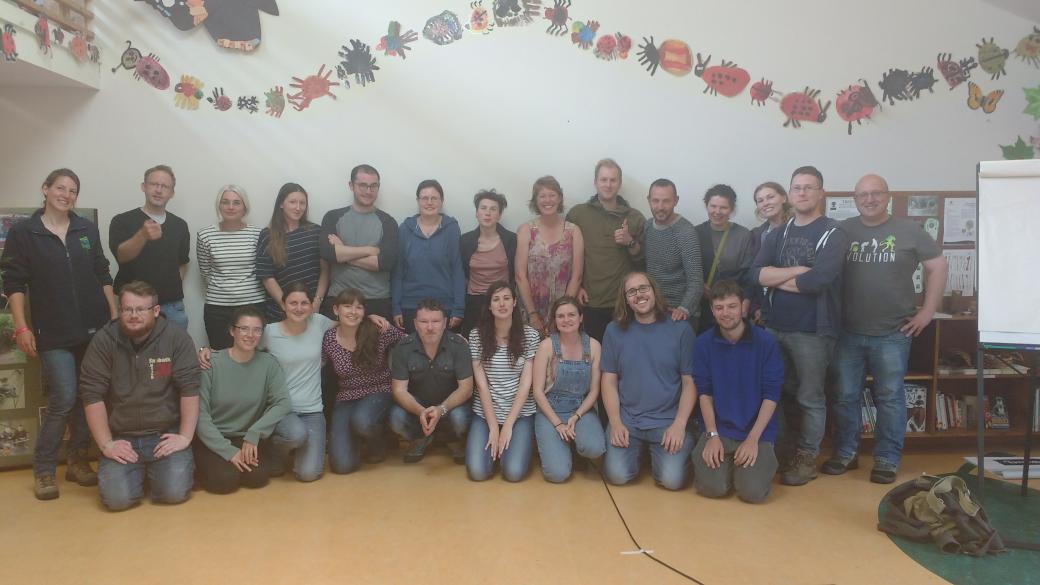