You are here: Home / Uncategorized / Volunteer tracks, trails and signs 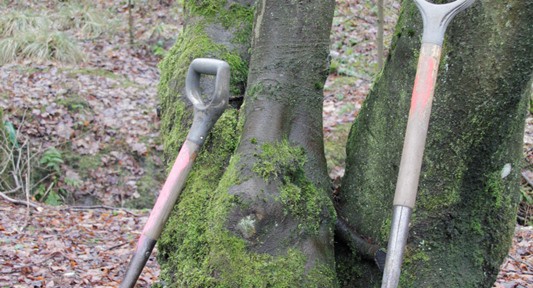 I’ll be working mainly on a project called Wild Ways to Wellbeing which aims to showcase how engaging with the natural world around us can really help people with mental health problems manage their illness and make a positive contribution to their lives.  The programme will be based around something called the 5 ways well programme, but I’ll do more on this in future blog posts (if I’m ever allowed to write any after this one…).

I was really excited to get this opportunity as it’s a journey I’ve been through myself.  I’ve lived with depression and social anxiety disorder since my teenage years (I’m a lot older than that now).  I went through every treatment process imaginable but nothing made a dent in my symptoms until a chance encounter with a volunteer otter survey led, by a very circuitous route, to me being here writing this today.

The first month in the new post was a bit of a whirl of introductions and inductions.  I’ve spent a lot of time getting to know the office and the IT systems at Cumbernauld and being shown around the town.  I’ve done a lot of research on local groups and attended a fair few meetings.  I’ve attended training courses on engaging communities, therapeutic gardening and dealing with conflicts (not all at the same time) and have more along those lines planned.

I’ve been on several school visits to local secondary schools where the CLL’s Natural Connections project is getting young people involved in designing some ‘living windows’ for their local green spaces.  Some of these have been fun but others have been more challenging, which though it is frustrating at the time, is all a good learning experience.  I’ve never really been involved in this sort of arts programme before, and I’m the first to admit that working with young people is something I need more experience at so I’m looking forward to following this project and finding out more.

Another part of the Natural Connections Project has been the establishment of a successful volunteering group in the area.

Environmental volunteers are one of the keys to a healthy landscape, they are the ultimate ecosystem engineers, making a positive impact on the environment wherever they are to be found.  Part of my traineeship in Cumbernauld will hopefully involve working with some of these dedicated individuals so I was keen to get out there and see if I could find some at the earliest opportunity.

The first step to spotting some environmental volunteers is to get yourself out into the correct habitat.  Cumbernauld is 50% green space (have I mentioned that before?) so there’s plenty of potential out there – in fact too much…  floundering around hoping you’ll just stumble across some volunteers is unlikely to be a productive strategy.

Like most nature spotting the key here is local knowledge.  A bit of research (I looked at the CLL Facebook page) revealed that a local expert (Tracy, who sits across the office from me) had a volunteer session planned for the 21st of February… aha Watson, the game’s afoot… 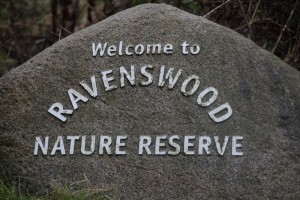 Fast forward two weeks later (after one false start due to snow) and I found myself in the beautiful (if cold) surroundings of Ravenswood LNR, deep in the heart of the Cumbernauld Living Landscape.  Tucked away between the motorway and a housing estate, Ravenswood might not seem like much to the outsider, but it was clearly a popular and well used site, with plenty of room for nature and people to interact.  Prime volunteer territory.

It didn’t take long before I came across the first signs of their presence.  A freshly dug drainage channel was allowing the floodwater to flow away from across a blocked path.  Nearby a jacket and hat hung from a tree, clear signs that someone had been working hard here – and very recently.

Remembering my training I looked around for more signs and I soon spotted tell-tale marks of volunteer activity.  The layer of mud and leaves over the path surface had been energetically cleared away revealing the hard surface below, transforming an impassable quagmire back into a recognisable and usable path.  Someone had been picking litter, carefully depositing it in black bags ready for collection; a collection of tools leaned against a tree, a bag containing gloves and first aid kit lay nearby…

I could hear their call drifting through the trees, snatches of laughter and friendly voices.  Following the noise it wasn’t long before I spotted the distinctive (and stylish) fluorescent jackets that marked out this particular subgroup.  I approached slowly and using the technique of grabbing a shovel and getting stuck in to the mud, soon integrated myself into the crowd.

One of the key skills when working with volunteers is knowing when it’s break time – something that I am instinctively good at.  There’s no one out there better than me at leaning on a shovel and wondering where the biscuits are.  Following my nose I made my way along to the SWT vehicle with its vital load of supplies.

Tea, coffee and baked goods are the natural diet of the volunteer and they were well supplied with it here.  The driving rain was making the cinnamon buns slightly soggy but I felt it was harsh to fully blame the SWT for this and so merely noted it down to use against them later.  The chat was good, but the rain was steady; in conditions like this it actually doesn’t pay to stand about too long – besides people had come out to work, chat could come later!  Reluctantly I downed my coffee, returned my cup, ate another bun, and we set off again. 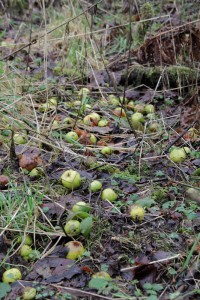 The next task was a bit of invasive species removal on a piece of boggy ground further into the reserve.  Over time the bog was rapidly filling up with small trees so it was our job to go out there and interrupt this process, preserving the wet ground as a fantastic piece of habitat.

This is one of the (many) jobs where volunteers are invaluable and irreplaceable.  On first arriving at the site, your heart sinks a little as you take in the enormous piece of ground and the hundreds and hundreds of little saplings on it, each one of which would have to be removed by hand.  Working on your own the task would be pretty demoralising – and extremely time consuming – but when you’ve got a good group of folk willing to roll their sleeves up and get stuck in its incredible what a difference they can make.

We spread out, everyone heading off in different directions in search of a likely looking sapling, everyone has their own way and speed of working and soon finds their own rhythm.  Today most people seemed happy working in ones and twos but everyone was quick to pitch in and form a team when necessary to remove a particularly tough looking tree, or deeply bedded root.

I wandered round the various groups trying to make sure I spoke to everyone, there’s no ‘set’ type of volunteer, they come in all shapes, sizes, ages and backgrounds and it’s always great to hear exactly what it is that motivates each individual.

I also took lots of photographs.  Documenting the tasks is a vital role, but it also importantly kept me away from sharp things that I could hurt myself with. I loved how the reserve seemed such a quiet oasis but is actually surrounded by the town.

We left after a good few hours out in the driving rain (I discovered my boots aren’t waterproof, but luckily my feet are) tired but happy – and fortuitously just as the rain turned to sleet!  All in all it was a great day, albeit in some pretty tough conditions.  The volunteers were fantastic and did a power of work, we made sure to let them know how appreciated their efforts had been, and hopefully they could see for themselves what a difference they’d made.

I’ve got lots more training planned and I’m hoping to get out into Cumbernauld a bit more over the next few weeks to really get to know the green spaces (you’ll never believe what percentage of the town is green space, I’ll tell you in the next blog, it’ll blow your mind).  I also hope to get out and meet more volunteers and community groups.  And I hope the snow stops.

First month down, and things are going pretty well, I can’t wait to see what the next 11 bring!