You are here: Home / Uncategorized / Masterpieces and Masterplans

The first promotional leaflet with a map of walks 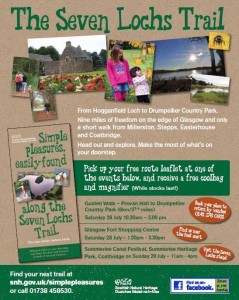 within the proposed Seven Lochs Wetland Park has been published! The day the boxes arrived from the printers was of great excitement to me and Jimmy (Glasgow CC Countryside Ranger) because we’d both worked so hard on this project. Lots of people were involved in making the leaflet a reality: Theresa (Scottish Natural Heritage), Allison (Glasgow CC) and Scott (GCV Green Network). A launch weekend to promote the leaflet was planned for the end of July.

On the Saturday I helped lead a guided walk

to introduce people to the new pathways. Lots of people came from the local area and all of them were delighted to discover new places to go walking on their doorstep. Along the route we tucked into juicy wild raspberries, saw a kestrel and buzzard, deer prints, butterflies and plenty more. Immediately 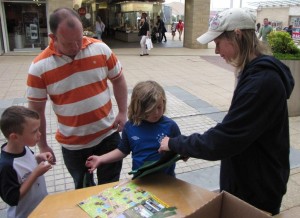 afterwards I headed over to Easterhouse Fort with Jimmy to hand out the leaflet with Scottish Natural Heritage’s free coolbags with an activity book and magnifier inside. It took less than 2 hours to hand out over a hundred so that was a job well done. On the Sunday I took the second big box of coolbags to Summerlee’s Canal Festival in Coatbridge and they were snapped up like hot cakes! 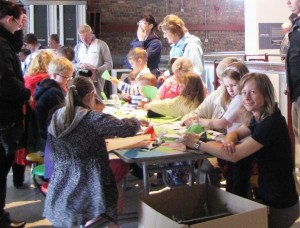 eager children. With so many fun activities going on at the centre I devised a craft activity to entice families to my table. After managing to bag a long bench with a dozen seats I was swiftly overwhelmed with kids of all ages, busy creating their own 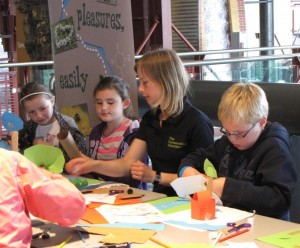 outdoor wonderland using paper, scissors and pens. The imagination and creativity of children never fails to amaze me! Whilst the children were making their masterpieces it gave Scott and me the opportunity to talk with parents and grandparents about the proposed wetland park. Lots of leaflets were handed out as well as the flyers I’d created to tell people about the project. They were all interested to hear about the plans for their local greenspaces and how they can be involved. 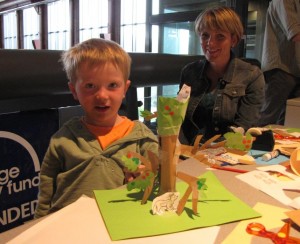 At the beginning of July my butterfly transect volunteers came to a Butterfly ID workshop that I’d arranged with Buglife and Butterfly Conservation. We all learnt 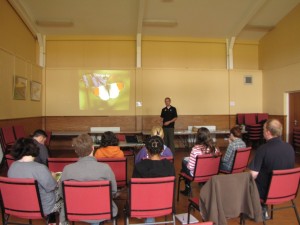 loads about Glasgow’s butterflies and how to ID them. After Scott Shanks’ presentation we headed into the park with Jimmy (GCC’s Countryside Ranger) and Bernie Zonfrillo (all-round nature expert) to catch and ID butterflies. Much to everyone’s satisfaction we caught and identified 6 different species of butterflies, as well as lots of other insects and plants.

The volunteer group for the wetland park is now twenty 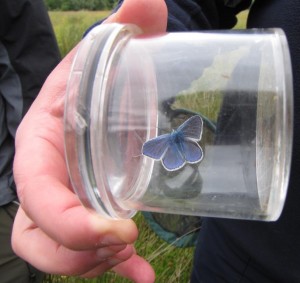 strong and still growing! Because of the huge interest in surveying butterflies in east Glasgow I set up a second transect at Cardowan Moss LNR and it’s turned out to be a great site for butterflies. It’s incredibly rewarding to meet, train and work with volunteers. Hearing how much they’re enjoying having a reason to leave their homes to walk through a nature reserve and look for butterflies has been heart-warming. Each day spent with a volunteer has left me with a happy glow.

I’m currently planning a programme of activities for my volunteer group. If all goes well it’ll start in September/October and continue until the end of March next year. Several partners are supporting this project: Glasgow City Council, North Lanarkshire Council, Forestry Commission, Froglife and The Conservation Volunteers. The first half of the programme will include pulling birch and installing some new plastic dams to influence the flow of water at Commonhead Moss LNR, followed by some rhodendrum cutting and burning at Drumpellier Country Park, and finishing off with some pond work, pond surveys and making a hibernaculum. It’s all very exciting and hopefully it’ll all happen this year and with lots more activities planned for 2013 – fingers crossed! 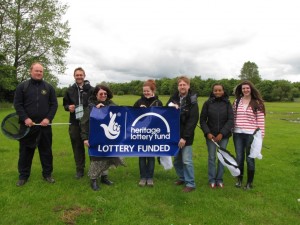 Last week two collaborative funding applications to the Scotland Rural Development Programme were successful! The funding from SRDP and partners includes access improvements, signage, entrance features and information panels in and around the proposed wetland park. To promote the new and upgraded trails an A3 leaflet will be created, showing the route and information about land use and management, natural heritage, built heritage and responsible access. There’s also some funding for an exciting community engagement project, to involve a community group and school with the promotion of the trail by working with them develop interpretation features to be installed at entrances and viewpoints. 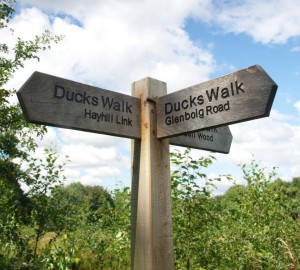 Lots to be getting on with then!