Greetings one and all, both old and new readers, to the regular monthly updates from The Tree Life Centre, just outside of Bristol in Kingswood.  The moth was full of contrasts, not just the weather but also the tasks (and their locations!) and the sheer amount of visitors we have had.  Hopefully I won’t have forgotten anything and given you all a taste of our little world and you’ll want to get involved! 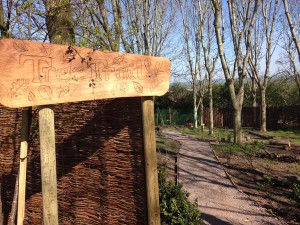 The month began with the Easter Holidays in full flow and with the sun shining for most of it we had many visitors who explored, and hopefully enjoyed, the tree trail along with the obstacle course, and the Centre in general as we gave many tours letting people know about what we get up to and the charity as a whole.  For the volunteers who put so much hard work into the trail it was great for them to see it being used so much.  The holidays culminated in us hosting a family fun day which included woodcarving of our signs around the site, creating mud monsters, making pizzas and willow weaving, not to mention marshmallows around the fire!  We would like to say a huge thank you to everyone who came on the day, and indeed throughout the holidays, we hope you enjoyed it and come back soon.  Keep your eyes peeled on our Facebook and Twitter pages for more open days in the future as we have a few up our sleeves already!

Across the site we have been hard at work continuing the redevelopments with putting up a new willow fence at the entrance way to match with the new gate.  Also, further fencing was put up around the back of the tree trail to help cordon it off.  In the trail much more wildflower planting has taken place which has really grown on now thanks to the usual April showers, hopefully it will continue to grow and battle against the poppy invasion we have every year from the pasture fields on the farm!  Elsewhere, groups of volunteers have continued with the wildflower project, planting many more seeds.  Another group has started to tackle the herb project again to improve the garden on last years success and make it a striking and sensory end to the trail.  Also, yet another group has started this year’s veg project planting various different seeds that the guys hope they will be able to take home and eat the produce. 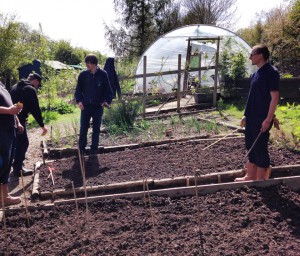 The veg seeds being sown

Finally, the conservation gang on a Thursday (sometimes Friday’s too) have been out and about in the minibus doing various tasks across the area.  This includes spending a couple of weeks doing various tasks in Springfield Park, Bath such as path widening and putting up fences, and a couple more days laying an eco-roof at The Create Centre.  They will really put their hands to anything!  If you have a task you need doing or want to get involved with the group, or any other groups we have and learn new skills, meet new people and generally have fun then please do get in touch and talk to Jason, you can arrange a taster day and meet the gang. 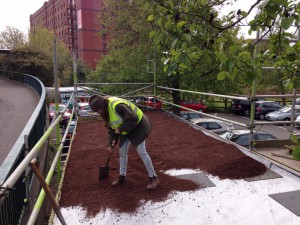 One stage of laying the eco-roof

Don’t forget you can get more up to date news, including lots more pictures, by liking us on Facebook or following us on Twitter.