One of the Tree Life Centre secrets are all the different types of apple varieties that are grown.

Grafting apples was done by selecting a desired rootstock which determines the growth of the variety. Then a variety was chosen. The rootstock was cut at an angle, then the variety was also cut. They were then joined together, and wrapped with grafting tape. The tops were cut as well and covered in plastic to stop too much water loss. The grafted apples were then planted close together in one of the beds.

Around four weeks later there were signs of a successful graft with small leaves appearing. 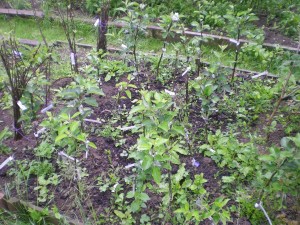