Wednesday 21st March
It was a great triumph for the very last day of the Lochore Wednesday Green Gym as the team returned to the aid of the valuable Grassland area by the Loch. Last week they valiantly fought back strands of encroaching Gorse from the nearby woodland and removed some well established stumps. 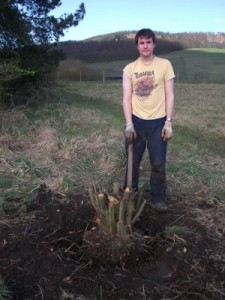 This week there were more stumps to be removed and as each member of the team chose their opponent they prepared themselves for the battle ahead.

There were moments when the task appeared too great but man points were at stake and after a small respite and biscuit refuelling the battle continued. 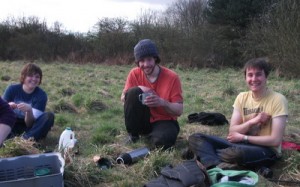 More muscle power and a couple of bear hugs later the tide turned and the stumps were defeated. Many a man point was earned. 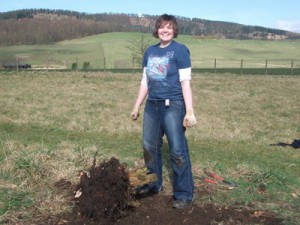 Meanwhile Jeanette and Amy were clearing some more fallen trees and branches around the edge of the woodland. They were joined by the rest of the team after their battles had each been won and the Wednesday green gym came full circle. More brashing!

But alas! That’s it for our Wednesdays at Lochore. Our team have bravely endured wind, rain and sunshine to clear woodlands of fallen trees, save a chocking pond and defeat leafy enemies bent on Grassland destruction. There has been a lot of sweat, the occasional drop of blood, mixed with many tears of laughter and even the discovery of some ancient treasure. 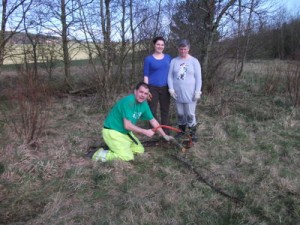 So a big THANK YOU is required for all our Heroes for their hard work, their dedication and their great company!