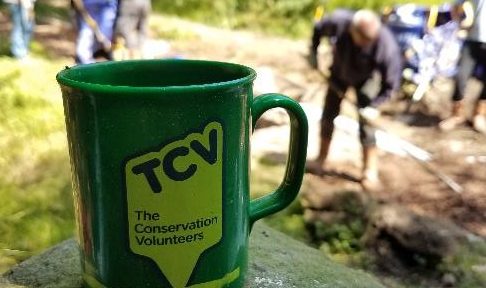 As TCV’s “American intern” this summer I’m told Scotland is lulling me into a false sense of security with the recent heatwave. But we were all grateful for sunny skies on Tuesday, July 18th as we worked on our tans and a new trail in Plean Country Park!

The promising start of a new trail, with plenty of summer sun

An ongoing collaboration between TCV and Friends of Plean Country Park hatched a six-month Employment Training Project funded by Stirling Council. Individuals gain essential employability skills while contributing to the upkeep of Plean and networking with like-minded outdoor enthusiasts. Folks from TCV’s midweek work group teamed up with Plean’s employability group to build a pathway increasing accessibility between the Estate Trail and the park’s play area.

Building the new trail is a multi-week project, although this was the first day I was able to join. The amount of work already completed was impressive; a bio-proof membrane covered in a layer of gravel stretched the full length of the path. Ditches were ready and waiting for the water-diverting pipes the volunteers would lay and cover with another layer of gravel. 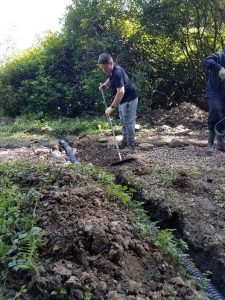 Although the group consisted of two previously separate teams, folks fell in side by side to work together. Strangers introduced themselves over an armful of pipe or wheelbarrow of gravel and a buzz of conversation filled the site through the entire workday. A rare sunny day promised no break from the heat as volunteers shoveled gravel into wheelbarrows to be carted uphill, but they continued without complaint and kept each other in good humor with jokes and good-natured teasing. 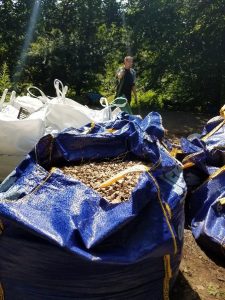 Bags of type 1 gravel waiting to be shoveled

Having spent a couple weeks with TCV’s volunteers I’ve come to expect the group’s positive work ethic, but I was pleasantly surprised by how welcoming everyone was, not only to “the American intern” but also among the previously separate work groups. Names were learned – and in my case, forgotten – quickly. By the time we stopped for lunch, individuals from both groups mingled to discuss everything from fickle Scottish weather to mixed martial arts. 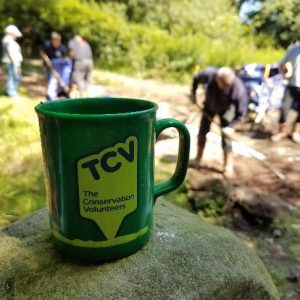 American moment here: I still can’t get over how every break is accompanied by tea, even in the middle of the woods!

After lunch, a portion of the group split off to clear branches and trees from the edges of the main trail. Even for this activity, the employability group mixed happily with TCV’s volunteer group. We used saws, loppers, even pole loppers to make sure the main trail looked open and inviting from a distance.

Pole loppers: making people like me feel tall since 1931

While there’s loads of work left to finish, the day was a success due not only to the tasks completed, but also to the human connections made. (Even if the day did end in a pinecone throwing competition.) 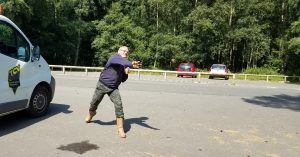 Plean Country Park is constantly tackling improvement projects; one of many decorative carved stump near the start of the new trail 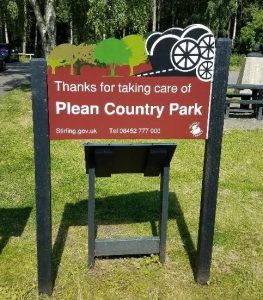 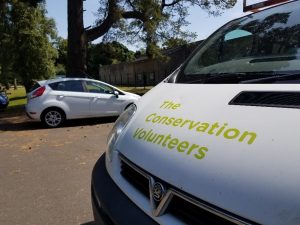