You are here: Home / Uncategorized / Oh I do like to be beside the seaside… 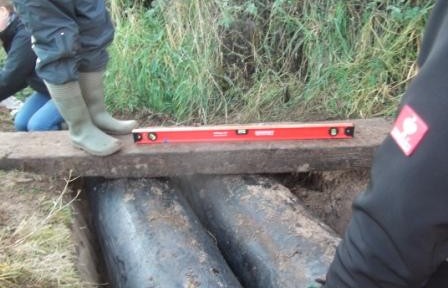 Trips to the seaside were on the cards this week for exciting boardwalk construction and pond clearance extravaganza!

We arrived at Gullane to sunny skies but blustery winds so we layered up and went on our merry way down to our site. Due to a path continually being water logged it had been decided that the path needed redirected and we were the right people for the job. This task involved constructing a boardwalk over 3 large pipes, which those feeling particularly strong managed very successfully and quickly to bring to the site. 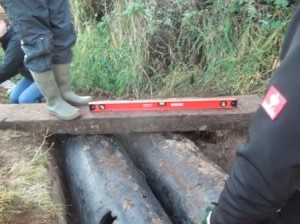 Keith and Charlie began to dig the foundations for the pipes while others began the immense task of clearing out the pond area and raising the new path to prevent water-logging.

Today began with similar task but we found 12 sleepers, which came in very handy as the new path was reinforce and made to look very professional. Work continued on the bridge to make it line up perfectly, though longer nails where required as upside down hammering could only do so much, so the final touches to the bridge would have to wait to Thursday. 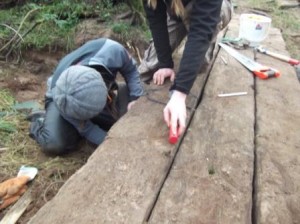 Those clearing the pond area became aware that in parts the water came to above wellies….so slow moment walking in the water hindered the speed of the clear out. Jamie went on a one man mission to clear a second pond and successfully made a good dent.

Today was a finishing day, Pat and Pam cracked on finishing the bridge while the rest of us with cracked on clearing the pond and finishing the new path route. While doing so Pat informed us that the original path that we were moving he had helped to put in many years ago. It seemed a shame to have to block off his hard work but at least he helped in the new construction and it was fun to find the biggest bit of spiky buckthorn to prevent the public using the old path. Inside the pond Kate and Keith managed to clear vast amounts of vegetation while staying dry, which became more and more of a challenge at the vegetation was removed. 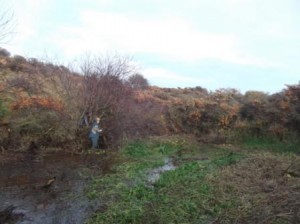 At the end of the day Derek and Pat had a stump removal competition of which it was a close call…both teams performed admirably but I think Derek may have won…though Pat may say that his was deeper and larger….The new path looked amazing and the pond actually looks like a pond so well done to everyone this week ,a lot of hard work and it defiantly paid of!

Also we would like to tell you all that our Christmas night out is the 15 December at Mezz Bar on Broughton Street from 7.30pm, hope to see you there. Please wear some form of Christmas hat, ta.