Tuesday saw the TCV Inverness midweek group return to a favourite project of ours – the control of New Zealand Pygmy Weed over at Loch Flemington. One of SNH’s sites, we are the only group carrying out this type of control/project in Scotland – no pressure then!! 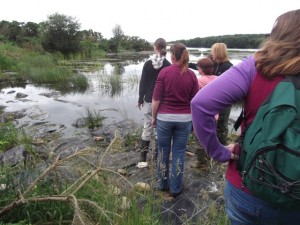 Checking out the membrane we put down back in March. Relief to see it was still in place! 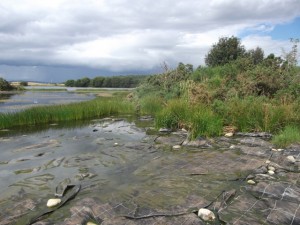 The aim for the morning was carrying over our rolls of membrane, which are used to cover the NZ Pygmy Weed, and clearing paths through the gorse and broom for easier access to the Loch shore. As is often the case at Loch Flemington, the “hard” work is completed in the morning. Once we get properly started the morning will be dedicated to rock collecting and carrying, which makes the laying of the membrane feel like a breeze!

We spotted a few water scorpions darting about in the water.

In the afternoon we walked around half of the Loch, looking at our previous GPS mapping to see where our next target areas should be and clearing more paths to the edge where needed. 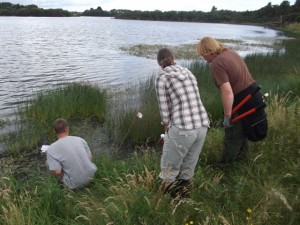 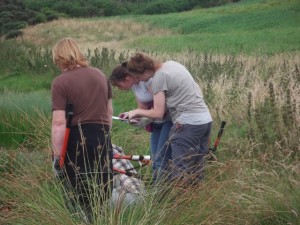 The Loch edge and surrounding farmland has a lot of plantlife that sparked all our interest. Regular volunteer Linda is great at her plant ID and always guesses correctly, or has her wildlife book handy. We discovered this plentiful plant was called Amphibious Bistort. 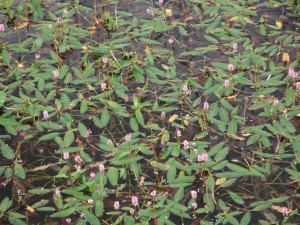 It was easy to spot previously laid membrane from the previous year as the reeds provided a good straight edged marker! And with little sign of life relating to the NZ pygmy weed, it’s good to see the method is working. 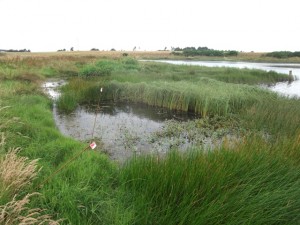 We are all looking forward to returning in the upcoming weeks and getting properly stuck in – waders and all. Well, it makes a change from the Himalayan Balsam 😉 All photos were taken by our regular volunteer Mark!