At first, ‘Ingestre Woods’ seemed to be that little overgrown, discarded park hidden behind some council flats that you wouldn’t have given a second glance. There had been some half-hearted interest from the children in the neighbourhood – they had been sneaking in through a hole in the mesh. But there wasn’t much room for them to play in. The space may once have had character, but that had long given way to an air of neglect. 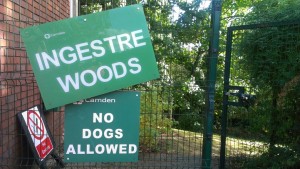 On the first day of the project, also my first day as a conservation volunteer, I was a little apprehensive by the idea of transforming such a place.  It seemed almost too foreign a concept. We were a group of people from varied backgrounds, with a wagon full of strange tools. What could we possibly do to breathe new energy into a place this forgotten?

My apprehension didn’t last very long for I had missed two important things – one, our group, diverse as it was, had an impenetrable passion for the environment, and two, our project leader, Chris had the sort of enthusiasm that was infectious.

Over the next few weeks, we focused on working on different parts of the park. After we had done some ground work – cleared the space around the entrance, weeded out any ivy creepers around the fence, made some space for a wildflower meadow – we embarked on more ambitious projects.

The first of these was the construction of a compost bin; a task that involved several different people in varying capacities at several different times. We worked with remarkable efficiency until one Saturday when Chris was on holiday and we realized that it was possible for a group of adults, inclusive of engineers and architects, to puzzle over technicalities like what side of the lid a hinge should sit on or what the exact measurement of a piece of wood for the bin should be.

When the bin was finally finished I think we were all a little proud, some people even christened the bin ‘our baby’. 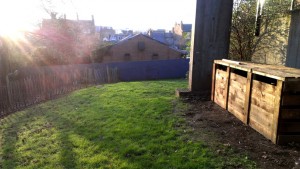 Being outdoors every Saturday for ten weeks, we noticed the seasons change gradually. By the time we started levelling the paths, autumn had slunk away, leaving behind hundreds of fallen leaves on the ground.

Our group of volunteers had grown considerably and we were now working in smaller groups. The disciplined amongst us worked on the construction of a pond, the strong and meticulous worked on creating and levelling the steps, and people like me with no specific construction skills worked on an insect hotel, a construction made out of wood that would hopefully house several insects and perhaps even some solitary bees.

It seemed straightforward at first – put logs into different boxes and make sure they fit tightly. But each log was unique and we spent time looking for the right fit – we wanted our residents to have customized homes! 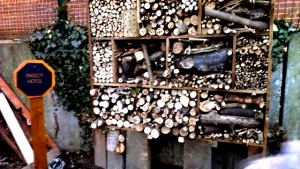 The final day of the project brought with it our first guests, a lady and her two small daughters, who had stumbled upon the park. As the children walked about the park – this wouldn’t have been possible before due to the overgrowth – their mouths lay half open in wonder and it was only then that I allowed myself to relish the end of a fantastic project.

All around were new things we had created ourselves – a compost bin, an insect hotel, a pond, bird boxes, colourful signs indicating wildflower meadows and trees. 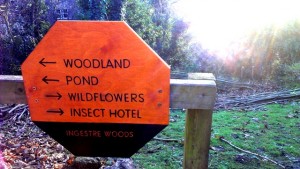 Each of us had worked on each creation in some way or the other. In the process, we had made new friends, had some fascinating conversations, learnt some great stretching exercises (every Saturday was ended with a set of exercises in a beautiful decagonal shaped room in the community centre adjacent to the park) and put a small part of ourselves into the project. Perhaps it was that, more than anything else, that dispelled that air of neglect I had initially felt. 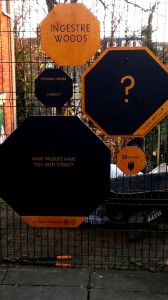 I can’t wait to go back in spring and revisit Ingestre Woods, if nothing, to see how many new residents our insect hotel has!