You are here: Home / Uncategorized / With the Gruffalo at Kilmardinny Loch

For the past three weeks, the Stirling volunteer group has been working on a project at Kilmardinny Loch near to the village of Bearsden. At this site, the volunteers carried out a number of different tasks including cleaning up six wooden carvings using brushes and other tools, re-painting the wooden carvings and we also, re-laid sections of the footpath around the small loch.

For the first few days, the midweek volunteer group concentrated on cleaning up the six expertly carved wooden shapes of insects, birds, amphibians and mammals, using brushes and a few other tools that we found useful for this particular task. Since they have been in place, the carvings have gathered a layer of moss, so it was necessary to remove it before painting. Once the cleaning had been completed, we began to apply a new coat of brown, weatherproof paint to the wood carvings to freshen them up, after being out in Scotland’s cold and wet climate for so long. In total, it took the group about two days to apply this new layer of paint to the animals but by the end, the volunteers all agreed that they looked much better. For the next few days at this site, we would begin to add some colour to the carvings in order to bring them to life and to make them more appealing to the passing public. Despite a lack of paintbrushes, we were able to add an array of colours to the shapes of the fox, butterfly, newts, pike, dragonfly and owl, in order to make them more realistic. Some volunteers even used their fingers to apply paint to some of more minute parts of the carvings. Whilst adding the colour, we received a lot of positive comments from passers-by about our work and about our skills as artists. After four days of painting, we had brought all the creatures to life.

As well as this, the group also worked on the famous 18ft tall, Gruffalo carving near to small car park, from where you can begin to walk around the loch. Once again the volunteers again had to clean and paint the carving but this time because of the Gruffalo’s height, our work this time involved the use of a very tall ladder, which we secured very tightly around the Gruffalo’s waist. Due to the height only a few of the volunteers were brave enough to go up the ladder carry out the painting of the upper half of the carving. In total, the cleaning and repainting the Gruffalo was completed in about four days and we were all very pleased with our work. 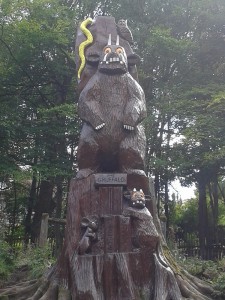 Around the loch, the volunteers did some necessary repair work to the footpath and re-laid some large sections with gravel, in areas where water was collecting when it rained. With use of the van and a trailer, we were able to drive a large amount of gravel around the footpath. When we found an area in need of repair, we simply stopped the trailer and then shovelled out the amount of gravel required. This allowed us to complete the work more quickly but we had to stop many times to allow people to pass.

All in all, the volunteers thoroughly enjoyed their time at Kilmardinny Loch and the painting of the Gruffalo was a real highlight of our time there. Hopefully, we will return to this site in future to do many other interesting tasks.