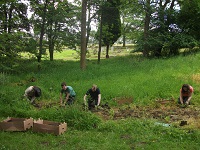 On Monday the group were out working on a project at Old Aisle Cemetery near Kirkintilloch in East Dunbartonshire. At this site, we were planting wildflowers in amongst areas of grass meadow, forest, and on banking near the site of several graves of First World War soldiers.

Previously at this site, Ali had been out to strim zones within the long grass, and sprayed these with herbicide. This was done to prepare the ground for the wildflowers, and so that they would have an opportunity to establish themselves without being crowded out by the grasses and other plants already growing there. 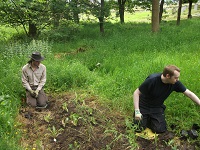 When we arrived at the cemetery, Jackie – the Ranger – joined us with boxes upon boxes of wildflowers. These were:

We carted these plants, as well as our trowels and fabulously multi-coloured kneeling pads (which came in green, yellow, and pink!). Ali and Jackie headed back to the nursery to pick up the rest of the plants, while the group got started with the planting. 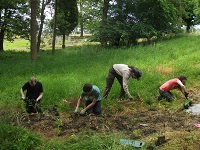 Although the weather had remained clement during the morning, during lunch it started to pour down with rain. However, far from dissuading us from returning to work, it only encouraged us to work harder!

Now all that’s left to do is to wait for the flowers to grow and bloom. 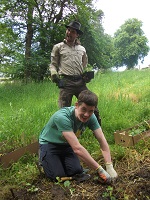