You are here: Home / Uncategorized / Gabion baskets at Muiravonside

For the past few weeks the TCV Stirling group has been working on a very interesting project over at Muiravonside Country Park near Falkirk, where we have been using Gabion(which apparently means “big cage” in Italian) baskets to form a new walkway over what we think is, a very old mill lade, which has become buried under layers of soil over the years and has now turned into a drainage ditch. Due to this, our work over the last few weeks has had a slight archaeological element to it, as we have unearthed some of the existing concrete features and many of the sandstone blocks which would have been arranged to form the original walls of the lade, whilst carrying out the necessary excavations for the baskets. As we have never previously used Gabion baskets in any of our projects before, this project proved to be a very interesting task for the midweek group volunteers. 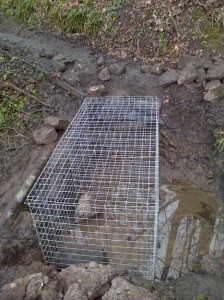 For the first few days on site, the volunteers of the Stirling group were involved in a number of different tasks such as removing the old and rather decayed, existing wooden walkway over the ditch, breaking this old walkway using crowbars and hammers and then removing the planks and other timbers to another area of the site for storage. As well as this, a small group of three volunteers had the unenviable task of digging out the three metre long, two metre wide and almost two metre deep metre deep “box”, which the Gabion baskets would eventually be fitted into. The digging was obviously the most time consuming part and some would say, the most unpleasant part of the of this project, as we had to slice our way through a fifty centimetre thick layer of clay and mud, where in some instances spades and shovels were rendered useless and required constant cleaning so that digging could continue. As well as this, the volunteers also had to contend with the “box” constantly filling with water, whether it be from water flowing in from the existing ditch, which we tried to temporarily dam with earth or from rainwater running down the slope directly behind where we were digging. 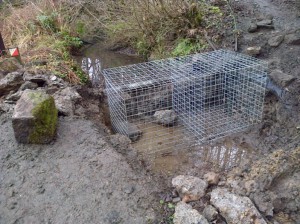 The second day of our work at Muiravonside proved somewhat problematic, as we had to deal with a huge and very solid concrete section of the original lade in the bottom of our hole, which would obstruct the fitting of the Gabion baskets. After some thought, it was decided that a two metre gap would have to be cut into the concrete so that the baskets would fit properly in place. Despite taking just over three hours and with a lot of smashing and bashing with hammers, chisels, sledgehammers and a variety of other tools that we had in our van, a neat gap had been carved through the concrete. After this small problem was overcome, our work continued at a steady pace, as we built up our Gabion baskets and secured them tightly with wire, before fitting them. For the last task of the day, the group concentrated on building walls and fitting sheets of terram around the inside edges of the baskets to maintain the basket’s structure and to help retain the aggregate within the baskets, whilst they were being filled the following day. 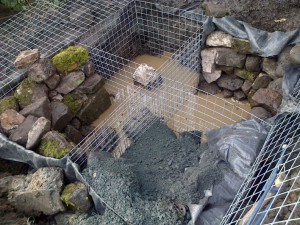 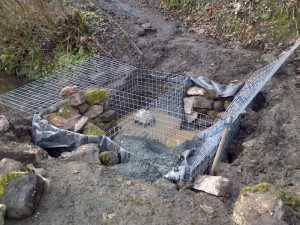 The third and fourth days of this project were spent finishing off the inner walls, fitting terram and filling the baskets with aggregate, which had been delivered the previous day. The filling of the baskets proceeded at lightning speed because of our use of a power barrow, allowing us to move larger quantities of aggregate more quickly. However, the recent heavy rain did slow the barrow’s progress as it quickly churned up the ground as it moved along and soon lost it’s traction in the mud. Only a lot of pushing and pulling by the volunteers could allow it to travel uphill to our work site. Despite frequent heavy rain showers and some sleet too, the baskets were quickly filled up to the desired level and kickboards were added to help retain the aggregate and prevent it from falling out of either side of the new walkway. 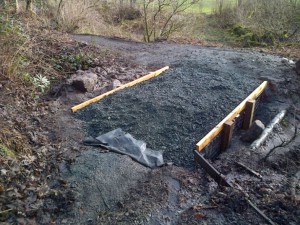 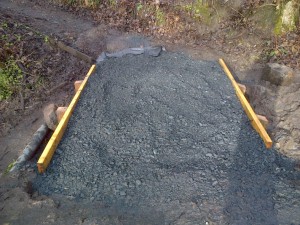 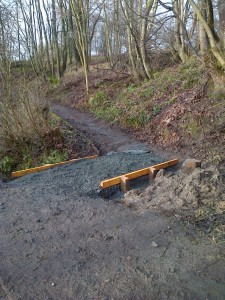 Overall, this proved to be an excellent first attempt by the group in the use of Gabion baskets and with three further sections to complete in the same way, we are sure to get a lot more practice in this new method.

Stay tuned for more from Muiravonside!