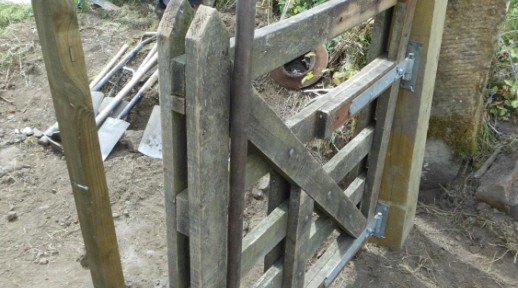 Last Wednesday and Thursday, the Stirling midweek group began work at a site to near to the village of Dunipace, which is located between Stirling and Falkirk. At this site, the group were to construct a new kissing gate, at the start of footpath, leading to the village of Fankerton. Altogether, we had 4 days to replace the main gatepost, build the rest of the kissing gate and to landscape the area around the gate and the start of the footpath. Also, if time allowed, we would to install three or four stone steps.

Last Wednesday started with a few small detours to pick up the necessary materials for the kissing gate, before we arrived at our site. After the usual teas, coffees and biscuits, we set about clearing the overgrown vegetation from around our work area and started to remove the existing posts and the very decayed gatepost. However, removing this gatepost was easier said than done and proved to be a real challenge for our group. We had underestimated the post and the time that it would take to remove it!! Anyway, the work on Wednesday (3rd) proceeded at a reasonable pace, with the group split into three teams. One team worked on landscaping the area around where the gate would eventually be situated and the start of the footpath, whilst another was tasked with removing the excess soil and rotten timber from around the site and generally with keeping the site tidy. Whilst all of this was going on, a third team of four people, battled with the rotten gatepost. Due to the very humid conditions and incessant midges, the group’s work was broken up with a few breaks, to allow us to drink water or seek shade because of the heat and to escape the clouds of biting insects. By the end of work, we had made reasonable progress. However, despite the group’s best efforts, the existing gatepost still remained firmly in place, after four hours digging around it, attempting to saw through it and after using almost every tool that we had packed into the van for the day, it would not yet budge. We would need to return the next day with a new plan.

With no detours, work on Thursday began promptly, again after the usual teas and coffees. Continuing on from yesterday, the group was again split into two teams, with one group concentrating on attempting to remove the existing gatepost and the other continuing to landscape and tidy the site. After two hours work, the post had finally been loosened enough for us to pull it free. With the old post removed, the laborious task of chipping our way through a block of sandstone began. This block also had to be removed, as it would allow us to continue enlarging the post hole for the new eight foot post. As this post hole became deeper and deeper, we quickly abandoned our spades and shovels and resorted to using a plastic mug from our teakit, so that we could remove the earth from the very bottom of the hole more easily. After lunch, we were then able to concrete our new gatepost into position, as well as tidying up our site, before heading for home.

This Wednesday (10th), we arrived back at the site in order to complete the kissing gate project. The main tasks for the day were to finally attach the gate fittings to both the new post and the gate, to hang the gate, work out where to position the posts around the gate and to concrete them into place. These posts surrounding the gate would then allow us to attach some timber rails the next day, in order to form a small enclosure around the gate, through which people will walk when they enter and exit the gate. With the group working really well in slightly cooler conditions, these tasks mostly completed before the group stopped for lunch at 12:30. In the afternoon, the other new posts were concreted into place, after the gate had been fitted and the post holes excavated during our morning period of work. We took great care in ensuring that the posts were completely level. The final job for the day, was to measure the distance between our posts and then to cut the rails to be attached to our posts the next day. With the measurements taken and the timber cut to the exact lengths needed, we headed back to Stirling.

Today was our final day of work on the kissing gate. With only a few small tasks needing to be done before the gate could be completely finished, the group quickly got to work after our morning teas and coffees. The jobs for the day included building a small stone step up to the gate from the road, attaching the timber rails to the post that we put in place yesterday, laying some aggregate through the gate area and generally tidying up the site. With the group working really well, as they have done for the previous three days at this site, we completed all of necessary tasks for the day very quickly and could finally declare the kissing gate finished. A final tidy up of the site was also carried out before we decided to head for home. 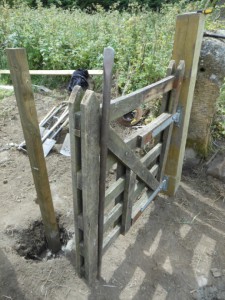 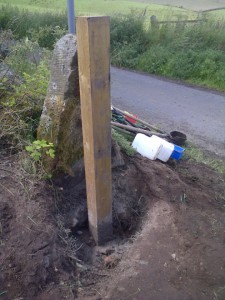 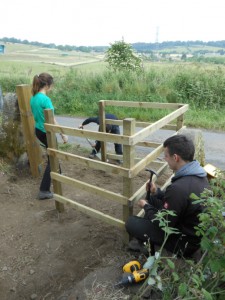 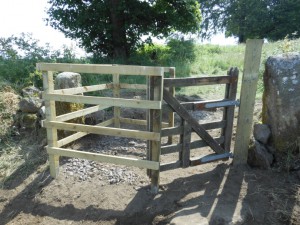 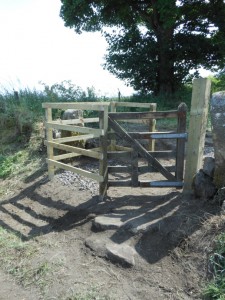 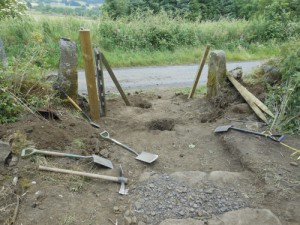