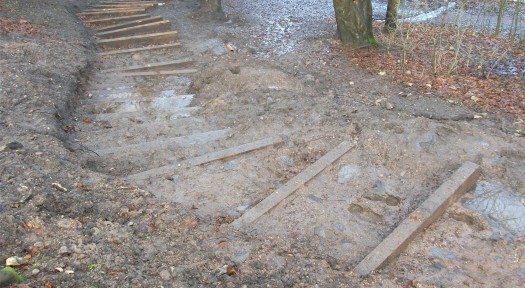 Since our last blog post, our midweek group has been continuing with the installation of some much needed new steps at our site at the leafy, muddy and very wet Ladywell Park in Bannockburn. The rain and mud will become a recurring theme of this post. This has been our second week at this site and so far despite the weather, we have made excellent progress.

On Monday in atrocious conditions, with wind and torrential rain, a small group of six continued to install our two metre long railway sleepers in the trench that we excavated over three days last week. On this day we managed to install five steps but were very much hampered by the rain, which quickly turned our trench into a mudbath. To make matters worse, we also realised that we had dug through an underground water channel which caused a section of our steps to quickly fill up with water. Next week, we will aim to solve this particular problem by digging down into the step where most of the water is collecting and then we will embed a plastic pipe, which will channel the water out through side of the step. We are sure that this will solve our problem. 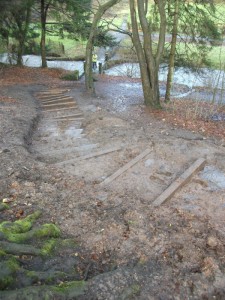 On Tuesday we had a slightly larger group of eight volunteers, which we decided to split in half. One group continued with the lower section of steps and managed to install a further four steps, whilst the other group of four began with the task of replacing some existing old and rotten steps at the top of our slope. Despite some small problems with the gradient of these steps, this group managed to replace five steps in total, although the terrible weather conditions did not help them. At lunch on Tuesday, some of the volunteers started a game of football on a nearby pitch but there is still much debate and deliberation as to the final score this particular game. This will probably continue into next week. Also, on this day, our Power Barrow broke down, which prevented us from moving our aggregate closer to our site. 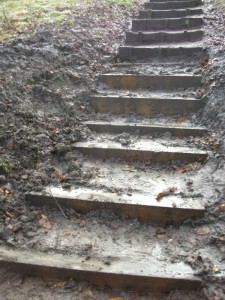 With another group of nine volunteers, Wednesday began with some very unusual dry and sunny weather, much to our surprise. At this site, we had not yet worked in dry weather, only in the rain. So with the sun shining and our volunteers brimming with enthusiasm, we set about our tasks for the day. Working mostly in bright and dry weather and with only a few short, intermittent showers, we managed to install the final two steps into our trench, thus completing the first stage of the new lower section of steps, leading to a small bridge over the Bannockburn. Over the next week, we will install a drain within one of the steps and fill the spaces between each railway sleeper with aggregate to create a nice even surface to step on. Whilst four of our group finished the lower section, two of our volunteers continued to work on replacing steps on the middle section of the footpath and through their hard work, determination and a lot of digging, they managed to help solve our gradient problems in this section and replaced a further four steps, before running out of the pins that fix the sleepers firmly into the ground, much to their disappointment. They really wanted to continue and finish the entire section but it was not to be. As all of this was going on, the remaining three of our group started with the tiring and laborious task of moving our much needed aggregate closer to our site, with the help of a newly delivered Power Barrow. Despite the monotonous nature of this task, almost three tonnes of aggregate was moved by the end of the day.

Although Thursday was a much quieter day, all of our group still managed to get completely covered in mud. In yet again terrible weather conditions, with strong winds and heavy rain, and with our site still resembling a mudbath, we soldiered on with a variety of tasks. These tasks included the movement of more aggregate closer to our site, the replacement of some existing steps, the filling in of the spaces between each step with aggregate and the removal of mud and leaves from the very bottom of our newly created steps, close to the small bridge over the Bannockburn. Despite the weather, the group worked very well and managed to make good progress with all of these jobs. This much outdoor activity has not been seen in bannockurn since 1314!

Next week, we will continue moving aggregate, filling in the spaces between the steps, replacing steps improving drainage and of course, playing football at lunch. Also, we will hope for some much needed dry and sunny weather.