Today was the group’s final day at Dunbog Primary Schools garden. We had previously done a lot of work here, building fences, gates, planters and willow structures and it was already looking quite impressive. The striking willow dome and tunnel were nicely finished off by Susan, Rab, Sandy and David. They laid a woodchip path and strategically placed log seats. The willow structure now looks fantastic!

The task of constructing and filling a bug hotel was left to Amy and Richard. This seemed like an easy task at first glance, “just screws these pallets together” Dave instructed them. After about 10 minute of adjusting pallets and looking confused Dave thankfully gave them a demonstration. The fun began when the bug hotel needed filled, foraging for good bug bedding was particularly successful over by the piles of garden waste. 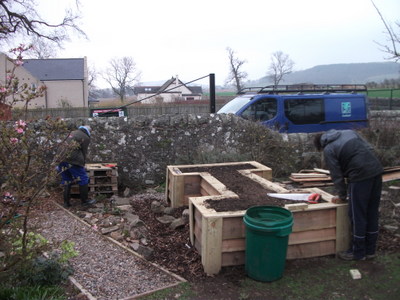 Meanwhile Dave, Douglas and Mike created a large wooden box for the kids to store their out door toys in. This was in keeping with the I shaped planter we built last year. This leaves us with Steven. He helped out everyone a little bit and did most of the gardening, but he really came into his own at lunch time when there were biscuits to be eaten.

The school were extremely gratefully and invited the whole team into their assembly to thank us. Everyone got an individual round of applause from the happy kids at Dunbog Primary School. What a lovely end to a brilliant project.