You are here: Home / SHC post / Another Habitat Saved at Lochore 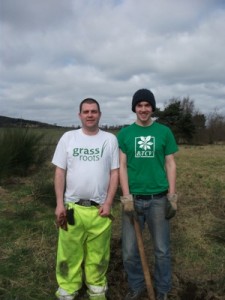 This week our team came to the rescue of an important area of grassland in the meadows. It was suffering from the slow but steady encroachment of its woodland neighbour, shoots of broom in particular were threatening to overtake this nondescript but important habitat and whilst woodland is wonderful our poor grassland deserves to be there too. So our team set to work removing any tall bits of vegetation they could find and even removed a couple of large stumps that had been left behind from previous management. This was no small feat. In fact it was a herculean task!
In a personal battle that took almost all morning and a great deal of strength, Richard and Dave defeated the largest and most stubborn stump. The others are still awaiting their fate. But have no fear next week our team will be back and the grassland will be safe again. 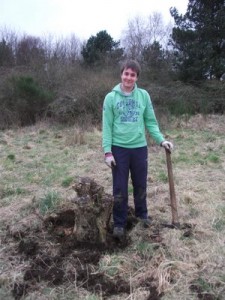