You are here: Home / Uncategorized / Penultimate and Last Day of Rhodie Bashing at River Orrin

2 March 2012 – Midweek Group
Last Friday we were out for our penultimate (full) day of Rhododendron bashing with the Midweek group. It was glorious day (unlike today! what on earth has happened) which was probably a good thing as I think a few of us were suffering from that Friday feeling! We didn’t encounter any frogs on the track this time, but Charlotte spoke to 2 local woman who said that they had seen hundreds but they weren’t alive! A rather worrying statement, but maybe not surprising since the unusual spring weather has turned rather wintery again?? 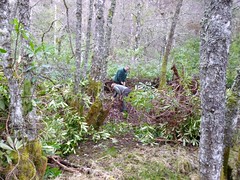 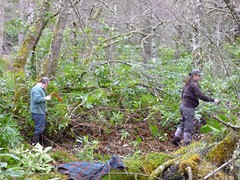 L-R: Rob and Duncan; Billy and Clare; – all getting stuck in 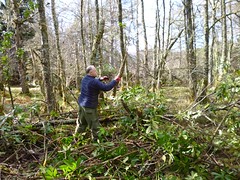 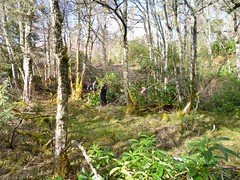 L-R: Mark looking like he’s about to do some kung fu move on the rhodies (suppose it beats lever and mulch!); Everyone dotted amongst the rhodies in the sunshine;

6 March 2012 – Last Day of Rhodies!
So here it is, our last day of rhododendron bashing! Yay! Or nay? There were probably mixed feelings regarding this, but I’m pretty sure some of our vols love the rhodies bashing. However only 2 of our dedicated volunteers joined us for this one so maybe the day was too sad for some to face! 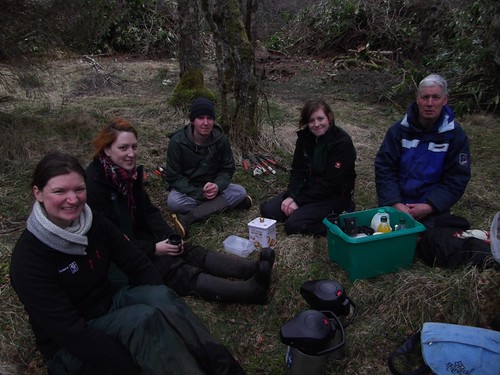 It’s nice to sit back and realise how much rhodie we have actually cleared over the last couple of months and I think everyone can be pleased with the work they have done, whether they were out once at the rhodies or all of them. Strange to think that a few weeks ago we were working alongside a frozen River Orrin, and then last week we were in spring conditions. Going by today’s weather we may be back to frozen rivers again though! 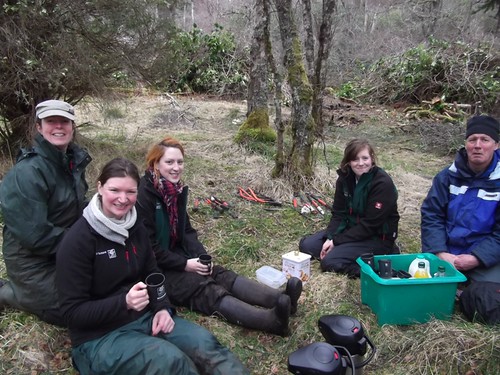 As always more photos over on our flickr page.