You are here: Home / Uncategorized / Don’t Lose Your Tamper 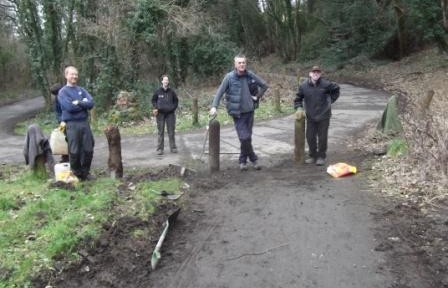 Tuesday last week we headed out to Spylaw Park, to do some ‘light’ path maintenance. There was some scraping of the main path/road – to try and uncover the edging cobbles; inserting a couple of wooden bollards and edging a large muddy section with logs, to prevent people from driving/parking across it.

Fiona took half the group to start to do the bollards, whilst I took the rest to clear the path and ‘selectivly’ fell some wind-blown trees.
Kate realised we would need stobs, and so it was out with her axe (as we may..possibly have forgotton to pack any billhooks…)! 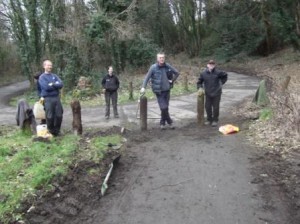 Several points during the day we mislaid the keys, some tools and some people…..

The problem with Wednesday wasn’t as much mislaying things more forgetting them! Mainly the keys to the gate at Callendar Wood! This meant a rather long walk into the site, but this only served to warm us up and get us ready for a day of tree chopping! We even finished the section we have been working on for the last few weeks! Hooray! 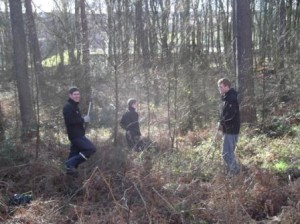 Well, Thursday was tough! We were down at the River Almond to scrape a section of path that was in dire need of some TLC and put down some type one (just a mere 10 tonnes). So we got to work shifting the mounds of mud, in some places it was nearly half a metre deep! When we had dug, scraped, wheeled and exhausted outselves it was time to start wheelbarrowing. The group began the challenge of trying to shift as much type one as we could before a well earned rest at lunch time.

At lunch time we were treated with some lovely birthday cake from Pat, which was much apprieciated and devoured, so a thank you to Pat and happy birthday from all.

The afternoon began the mammoth task of wheelbarrowing and edging the path, which we did in good spirits. We could see the sun shining in the distance, not on us but at least it was out. And at the end of the day the mountain of type one was greatly reduced and a unusuable path was immediately being used by the members of the public.So a pat on the back for all the volunteers as you excelled youself!. 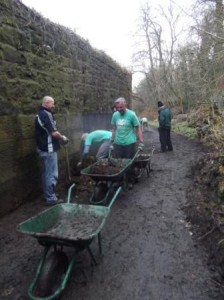