You are here: Home / Uncategorized / Get Ready, Get Sett, Go!! 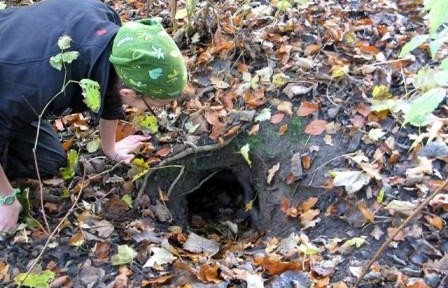 Monday and Tuesday this week were spent up in Stirling undertaking a ‘Leadership Skills’ training course. There were 13 of us on the course; a mix of FELPers and VOs (Volunteer Officers) from a selection of the other offices. The course comprised of a mixture of learning what leaders are expected to do (and not do), responsibilities and scenarios. Using group work to problem solve, undertake a tool talk and how to go about planning projects.

The only annoyance with this course was actually getting up to Stirling, as both ways on Monday were thwarted with road accidents and long, long traffic jams!

On Wednesday and Thursday I went surveying* badgers with Abbie Patterson. Initially I was shadowing him, learning how to distinguish badger tracks from dog; identifying snuffle holes (small completely round circles in the undergrowth where the badger has been using its nose ‘snuffling’ for grubs); tracking trails, identifying the different sett types (main, annexe, subsidiary & outlier) and discovering recent activity. 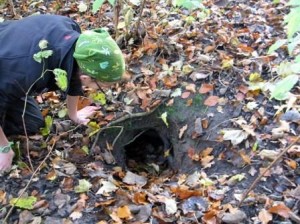 Taking care not to fall down a badger sett

With this in mind, I was then set with the task of studying the locations badger evidence (including setts) with this Scottish woodland.

A little about badgers, for the dilettante:

The Eurasian Badger (Meles meles), is a large mustelid found throughout Europe and Asia. The mammal has a close resemblance to a small bear in body shape, and has strong digging claws on its front feet. The black and white colouration on its face is thought to be used as a warning system, but also as a method of identification; no two badger stripes are identical.

They are omnivorous, relying on a variety of foodstuffs in addition to earthworms (the primary food); carrion, fruit, bulbs, tubers, nuts & cereals.

Badgers are highly social animals, living in groups called ‘clans’, which comprise of mix of approximately a dozen individuals; both boars (males) and sows (females). Badgers primarily live within setts, – underground chambers which are interconnected by tunnels. Within the clan territory, the number of setts will depend on availability of food, the size of the clan and the suitability of soil/ground. 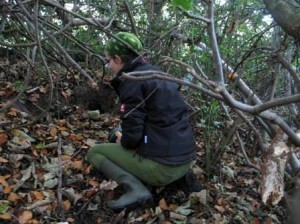 The Eurasian Badger is protected by law in the UK under the Protection of Badgers Act 1992 and Schedule 6 of the Wildlife and Countryside Act 1981.

Tracking the animals, really involves looking for evidence of them, in the form of: prints, hair, spoil bedding (which is cleaned out of the sett), well-used paths linking sett holes, latrines (dung pits) and general tunnel shape.

It is really incredibly interesting tracking animals, as you can never tell what you’ll find, or what you’ll have to crawl/climb over/under/round/through to find it! It’s a full workout. There’s the ‘Wow!’ factor when you find the perfect print or on Thursday when we found an enormous sett (over 20 holes – the average sett has 12).

*Due to the nature of the species we were studying, locations of surveys and setts are not disclosed.