You are here: Home / Uncategorized / The Wheel On The Saw Goes Round & Round 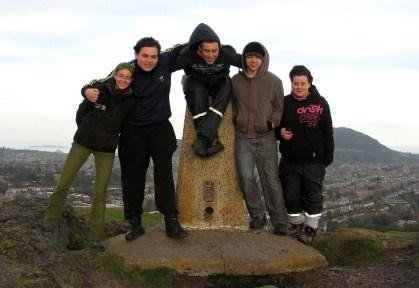 Week 2 of the FELP programme commenced with an early start, and a train ride (accompanied with a spectacular sunrise over Grangemouth) up to a particularly foggy Stirling. Met up with the Stirling FELPers at the station and was dropped off at King’s Park Farm. Any speculation to what an ‘Abrasive Wheel’ training course might comprise of vanished when a selection of engine driven saws were deposited from the back of a large truck. The morning was spent inside learning the theory work, which was followed by lunch (and the curiously exotic jam, cheese and lettuce sandwiches) and a fairly straightforward test.

In the afternoon, practical work of learning how to use the saws safely to cut a selection of stone slabs and metal objects. Sparks were flying and the air (already foggy) was filled with dust. By the time we finished, night had fallen so much getting lost ensued trying to find our way back to the train station in the darkest fog.

Tuesday and Wednesday was spent at the Hermitage of Braid (CEC Rangers HQ) undertaking a short course on ‘Introduction to Environmental Conservation’. This was being taught by Abbie Patterson, a wildife ecologist. It was really interesting to hear all the work he had done on Canna (discovering why the seabird populations were in decline – rats!); how he had gone about the fieldwork and what happened in the end (suffice to say there are no longer any rats on Canna). We went on two short field trips: one through the hermitage gorge; and the other to the top of Blackford Hill. There was another test at the end of the course. Hopefully I will be doing some shadowing of Abbie in the following weeks, monitoring and surveying Edinburgh’s badger populations. I’m really looking forward to this!!! 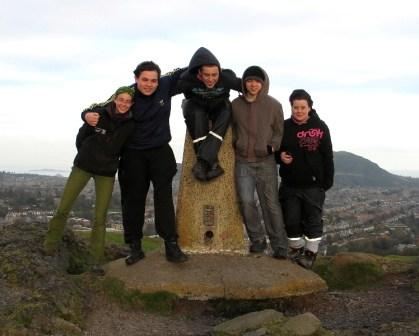 Thursday was spent back at Callendar Woods with the Edinburgh MWG, continuing on with felling Sitka spruces. This time we saw evidence of roe deer using the woodlands, as there were piles of scats amongst the bracken, and some sightings of the actual animals. In the afternoon, I took all the volunteers I could find (minus Derek & Pam who were temporarily lost (sorry, mislaid)) on a short tree identification walk; whereupon we saw numerous coniferous trees and debated over the types of oak.

*Note: ‘Sessile’ means ‘attached directly to the base’; whereas ‘Pedunculate’ means ‘supported on a stem/stalk’

Friday was spent at Callendar Woods, with Anna and the other FELPers. We were split into 2 groups to do a competitive scavenger hunt – which involved exploring the woodland (in other words, getting lost) looking for all manner of natural things. At full time, the score was 27 – 16 to us (myself and Jamie), and the promise of brownies from Anna.