As July came to an end we said a fond farewell to Danskine Loch, a site that the Edinburgh Midweek Group volunteers have been at almost every week since February in conjunction with Scottish Natural Heritage.

It’s a beautiful secluded Site of Special Scientific Interest near Gifford and was designated as an SSSI due to its large fen woodland and open freshwater – habitats which are rare in East Lothian. Unfortunately invasive dogwood had grown at the edge of the loch and had developed into dense thickets which smothered the native plant life, altered the wildlife habitats and reduced the flow into the loch. 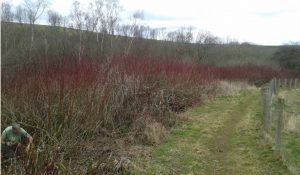 Our volunteers have been working hard to rid the loch of this pesky dogwood, using loppers and bow-saws to chop it down and then (the fun bit!) burning it in large bonfires. It was hard but satisfying work and the interesting fen woodland has finally re-emerged from behind the ‘red sea’ of dogwood. 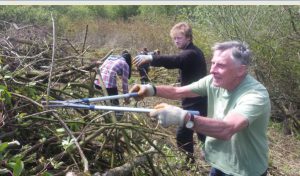 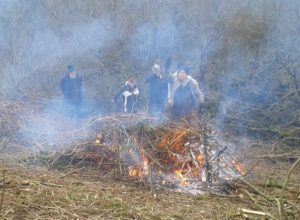 Thankfully we were blessed by some beautiful, warm sunny days more recently but as we started work in February, we also had some rather cold, wet and wintry days to contend with.

However, nothing can dampen the spirits of our dedicated and enthusiastic team of hard-working volunteers (as long as there’s a well stocked tea and biscuit kit to keep them going of course!).