You are here: Home / Uncategorized / Learning the ancient art of Hedgelaying – in 3 days. 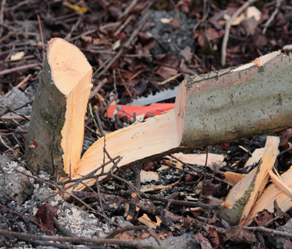 One of my aims for this year is to give our volunteers a chance to contribute to this Blog. So its over to Louise Gibson, one of our Volunteer Officers for her thoughts on her introduction to hedgelaying…

“As I start writing this it’s been a long day and my arm aches but it’s been a rewarding day too. We’ve finished the stretch of hedge we began to lay 2 days ago. In 3 days I have gone from not knowing what hedgelaying really involved, to being able to lay a hedge to a ‘satisfactory’ level myself.

I’d heard of hedgelaying before, I know it can be taken very seriously and that people go to competitions to show off their skills. I didn’t know the first thing about how to go about actually laying a hedge, but as a volunteer here at Skelton I’ve learnt to just throw myself into a new challenge. 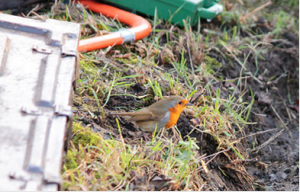 A curious bystander is hoping for some free lunch.

Hedgelaying is an ancient skill that involves half cutting down a line of small trees and shrubs and laying them down to form a hedge. Stakes are then placed at regular intervals along the hedge to hold it all together. With modern technology it’s in danger of becoming a dying art.

A laid hawthorn stem (left)  and removing the heel after laying, my least favourite part (Right)

After an introduction from Max (an expert hedge-layer and an excellent teacher) we got stuck in. Traditionally a tool called a ‘billhook’ is used to lay hedges, so that’s what we used. Max has a large collection of billhooks that he’s collected over years and we have some at Skelton too so there was plenty of choice. When the bushes were too large for the billhook we resorted to a saw.

After learning the basics and spending a while laying the hedge we ended the day by felling a tree that was just too big to be laid. I have never felled a tree before and it was an interesting experience. Toby mentioned in a previous blog-post how chopping down trees can be a good thing and I do understand, but it still feels a little bit wrong.

Cutting the ‘bird’s mouth’ in preparation for felling a tree

On the second day a reporter from ‘Made in Leeds’ came to do a brief report on what we do here, and I made my television debut. Being interviewed was odd, and more than a little nerve-wracking, but at least I know I looked the part in my high visibility vest and hard-hat.

On the final day it was all hands on deck to finish off the hedge, we ‘broke in’ further along so that two people could lay at a time. By this time we volunteers were pretty much trusted to go it alone, albeit watched closely by Max.

Laying the last hedge and tidying up I couldn’t help feeling proud of what we’d managed to do.

We’re laying the rest of the hedge on the road this winter so if you want a chance to learn a new skill and give us a hand then there is still time to get involved. However right now I’ve got to get back to pulling the thorns out of my legs.”