You are here: Home / Uncategorized / Old and New

There seems to be a growing revival in craft activity at the moment, which includes a return to traditional practical skills and tools. Some of this is being looked at as a  ‘return to simple’; a chance to get  hands on, in contrast to to the maelstrom of busy-ness and technology that dominates so much of life. Some of it is a historical or technical  interest in crafts and skills that have fallen away. However there is a part of it which remains because some of the these techniques remain relevant and useful, and will continue to do so into the future.

We’ve found over the years that there is lots of interest within our volunteer team at trying a hand at these skills – with hedgelaying, green woodwork, coppice crafts and willow weaving all being popular over the years. Using some of these traditional skills feels more like learning a craft, or developing a skill, which can bring frustration at times, but also satisfaction.

This was highlighted recently when we did our end of summer cut of the wildflower meadows on site. It’s a annual process, to maintain the meadows, and over the last few years, as well as using a mechanised power scythe (or allen scythe) we’ve had help from Niels Corfield from Edible Cities, running workshops to train the team in how to use a traditional Austrian Scythe. 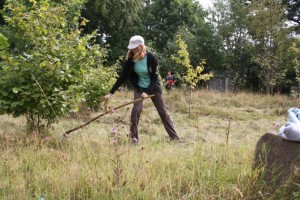 Learning to use an Austrian Scthye

It takes a bit of getting used to at first, and there’s always a few grim reaper jokes,  but before long the volunteers were getting into the swing of things (literally) and a team of 5 scythes were working their way across the meadow. Everyone was interested, able to see how others were doing and taking on from  advice to improve their technique, or how to maintain and sharpen the scythes. 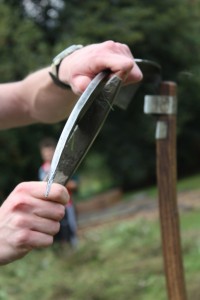 After a couple of hours the team had settled into a steady rhythm and rapid progress was being made – working in pairs to ease scything muscles every now and then! Meanwhile we also fired up the power scythe to cut a couple of the meadows in order to compare – distracting some of the volunteers with the opportunity to test out heavy machinery. 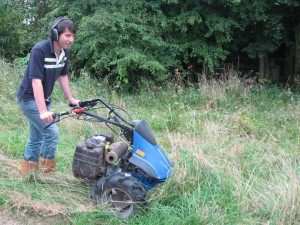 Getting out the big guns

The power scythe chugs along the ground relentlessly. It pulls itself along, and  vibrates a lot – so much in fact, that you have to keep the speed down or it has a tendency to shake itself apart! It dealt very well with lots of the woody material that the scythes struggled to deal with, and gets the job done pretty quickly. But there was never a queue to have a go – somehow the noise and vibration of the machine didn’t seem that appealing after the quiet and calm morning with the scythes.

At the end of the day I chatted to some of the volunteers about how things had gone. Most of them enthused about the Austrian Scythes, but were relatively ambivalent about the machine; the reality was that although both of them did the job, there was only one where you felt like you were engaged in the process, and actually learning something. For a team of volunteers wanting a postive, hand-on day in the natural environment, the Austrian scythe was a great tool, and with practice, a really high standard of finish could be achieved – but for a lone person faced with a meadow and one scythe there would be a lot of work needed to be able to keep up with the machinery for pace! 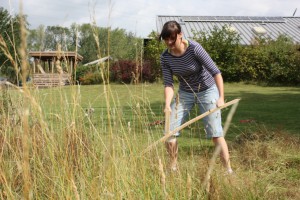 Getting into the swing of it

As the Skelton Grange site grows and changes we will continue to try the most appropriate way to manage and improve the site with the skills and resources we have available. Technology can be a godsend at times, but when traditional skills can actually improve the experience for the volunteers who do most of the work on our site, and also leave a really great end result – we’re keen to make the most of those opportunities.  After all – must be hedgelaying season soon…