You are here: Home / Uncategorized / First month as a TCV trainee :)

Hello! My name is Aroa Sampedro and I’m happy to be a TCV Natural Talent trainee, studying lichens and seaweeds on the Edinburgh shoreline. My office is in the Royal Botanic Garden Edinburgh,  amazing right? 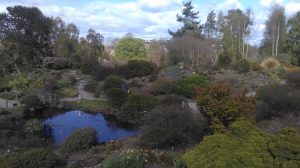 First day at the RBGE

During the first few weeks, I have been learning a lot about lichens! I promise I will be talking about seaweeds later on, but right now, let´s talk about lichens.

What is a lichen?

A lichen is a symbiotic association between a fungus and algae and/or cyanobacteria.

The lichen symbiosis is a mutualism, where the fungi are “heterotrophic” and need an external source for getting food. The algae and/or cyanobacteria are photosynthetic, and provide the simple sugars to their fungal partners.

The fungi build the structure of the lichen thallus, within which they provide conditions for a long term, stable association with their photobionts, the basis of the lichen symbiosis. What can I say? They are like nice flatmates helping each other!

Highlights of my first weeks

So far I have been meeting everyone at my department and getting my head around this new step in my life! I´m loving every second I spend working on this project!

So, why is this project so exiting?
Edinburgh shoreline was an important settlement during World War I and II and is forgotten nowadays, becoming a place for heavy industry, retail and sewage. All this industrial and military history is telling us a story about local habitat development, on a clearly unknown coast for the nearby human communities.

So it is in our hands to give Edinburgh the coast that it deserves! 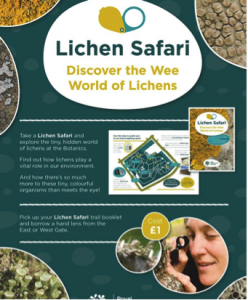 Lichen Safari at the RBGE 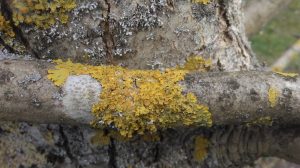 Lichens on a branch at the RBGE – Aren’t they beautiful?

What an amazing idea! It´s open to everyone and I totally recommend it. I personally enjoyed it a lot, I visited it on my second day and it opened my eyes to a new world! The lichen safari gives you an excellent opportunity to look closer and see how astonishing, colourful and different lichens can be.

Let´s go to the beach!

First contact with rocky shore lichens and my beginner photograph skills. And it was the first time I was under The Forth Bridge, it leaves you breathless. 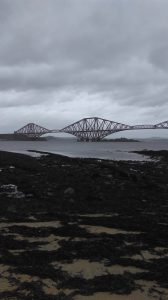 South Queensferry -The Forth Bridge (opened on March 1890!)

I had the opportunity to walk around, and understand better what can I expect to find in an area like Edinburgh. I could spend hours looking for lichens, but tides don’t let me do it! Honestly, South Queensferry worths a visit. Lovely walk along the coast, ending in a beautiful small woodland near Dalmeny Estate. 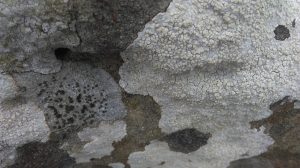 Interesting facts about the bridge: it was one of the first cantilever bridges in Britain, and Britain’s first all-steel bridge. It´s a Victorian engineering icon and it sees 200 train movements daily!

I must say I found a gem in the Edinburgh coast! People in Edinburgh TAKE THE BIKE/BUS/CAR AND GO TO THE BEACH! 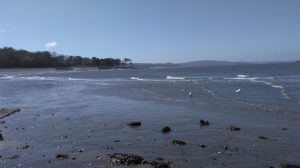 The potential of this area is huge, walking from the main beach heading to Granton, you can find nice rock pools for seaweeds and lichens everywhere!
On the other hand, we have Cramond Island. It is a tidal island in the Firth of Forth reached at low tide. 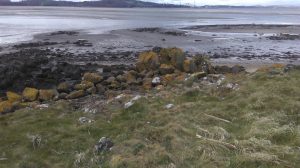 This wee island was used to graze sheep by the 1800s. Although its recent history is a bit more violent. 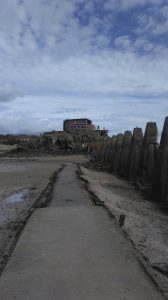 During the World War I the War Department took over the northern part of the island, as part of the defences of the Firth of Forth.

During the World War II, several military defences where placed in this island. The most obvious one is visible when you approach to Cramond Island; it is an emplacement for guarding the gap between the island on the south shore.

Actually, the imposing concrete teeth alongside the causeway were intended to ensure that U-Boats could not pass south of the island at high tide. It´s amazing, isn’t it?

Fun fact about Cramond Beach: it is that close to the airport that planes fly over your head! 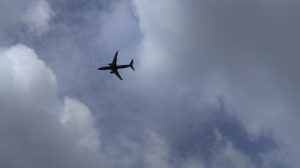 This was my first visit with a lichenologist. Sally Eaton is the Scottish Plant Conservation Officer at the RBGE and one of my mentors. She showed me what a rocky shore zonation looks like. 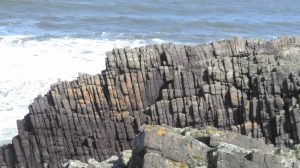 Lichen zonation on a rocky shore

Can you see there are three different colours? Let me explain you a little bit about zonation. 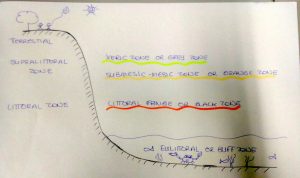 A simplified way to explain zonation -only where I will be working-and yeah… I’m the artist behind this!

Littoral fringe (Black zone): occasionally submerged by the tides. Subject to heavy spray and waves. The main lichen here is called Verrucaria maura, and it looks like oil! So please, look closer, it is not pollution!

Xeric zone (Grey zone): only light spray. This area gets wet and dry with tides.

That´s all for now!

Next…”Greening the grey” project and first days in the lab!

Thank you to the Royal Botanic Garden Edinburgh, Edinburgh Living Landscape and Esmee Fairbairn Foundation for this amazing opportunity!