I’m back with more slug and snail goodness for you from National Museum of Wales in Cardiff.

As we rolled into September you could feel autumn starting to creep in. For me this is an exciting time! It means fungi will start fruiting, with mushrooms appearing on the forest floor. Why is this so exciting for a mollusc enthusiast? Well, one of the species that has most intrigued me is the elusive Lemon Slug (Malacolimax tenellus).

This mysterious animal only appears in the autumn and winter months, surfacing to feed on fungal fruiting bodies. What it does the rest of the year is open to debate, as the juveniles are very rarely encountered. The most accepted theory is that it lives underground the rest of the year feeding on fungal hyphae. While the species is very distinctive looking, with a flabby lemon yellow body and dark brown to purplish tentacles, it’s seldom recorded and easily overlooked. This is partly due to it only appearing in the colder months, but also its habit of being restricted to ancient woodland sites. 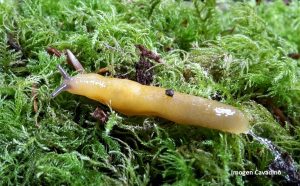 It was therefore with a slightly excited sense of anticipation that I headed off to Gwent Wildlife Trust’s nature reserve Silent Valley, near Ebbw Vale. This site contains ancient beech woodland, the highest in Britain and one of the most westerly in Europe. Potentially prime habitat for the lemon slug, and it did not disappoint! I visited the reserve with keen wildlife recorder Chris Owen and Dr Ben Rowson of National Museum Wales, and it took us no time at all to locate the first of many Lemon Slugs, sheltering in some leaf litter near a mushroom. The first record of this species for the Ebbw Valley! It quickly became clear that the species is relatively abundant throughout the site.

This species is very distinctive and straight forward to identify, including from photographs. Why not get out and about this autumn into your local ancient woodland and see if you can find one? We’re always happy to confirm slug identifications at the museum, so in cases of uncertainty drop me an email.

Our main reason for being at Silent Valley was not just to hunt the wonderful Lemon Slug, but also to survey for other molluscs at the site. This was achieved by getting down on our hands and knees to search for molluscs for an hour in each location. During this time we turned over stones and logs, picked through leaf litter and peered into cracks in trees. 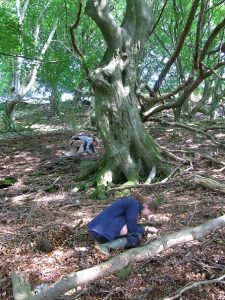 Searching for slugs and snails by hand at Silent Valley. Photo by B Rowson

We then collected a bag of leaf litter each, to be taken home at the end of the day. Once home I popped these bags in the freezer, before putting batches in the oven and spreading them out to dry out. Once dry the leaf litter could be sieved and the tiny snails picked out. Doing this meant that even the tiniest snail species that could be accidentally missed in the field were found.

It’s taken me a while to sift through the first of the nine bags of dried leaf litter, but it’s resulted in a tube full of interesting shells and a range of species. I’m excitedly anticipating sitting down and identifying them. We’re pretty certain that I have a tiny species in my samples that needs the empty shell carefully broken open to look at the internal shape to differentiate between the two otherwise similar looking species. I’m looking forward to cracking on with it.

Out of the greenhouse: A first slug record for my area!

The Balkan Three Banded Slug (Ambigolimax nyctelius) was first described from North Africa by Bourguignat (1861), and is believed to be native to South East Europe. Since 1960 it has spread in Northern Europe, as well as heading south, reaching as far as Australia. The earliest British record dates back to the 1930s from Greenhouses in Edinburgh. Since then the species is known to have established itself outside if the greenhouse, and is believed to be widespread in Southern England and parts of Wales. However, the species has been and still is seldom recorded throughout Britain. 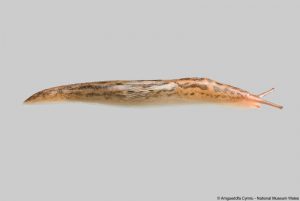 This is in part down to externally appearing very similar to another greenhouse invader, the Iberian Three Banded Slug (Ambigolimax valentianus). Both these species are between 50-80mm long when adult, with a short indistinct keel. The body colour ranges from pale grey, to yellow-violet or brown, with a distinctive pinkish tinge. The body has prominent dark bands, running parallel down the tail. Sometimes these can be faint or reduced to blotches. The two Ambigolimax species can also be confused with native species Tree Slug (Lehmannia marginata) which can look similar, but lacks the pinkish tinge to the body and usually has a pale central stripe running up the tail. Confidently separating these two Ambigolimax species requires dissection and examination of the shape of the penis. In A.valentianus the penis has a small blunt appendage on it, which can occasionally be inverted inside the organ. A.nyctelius has no such appendage on the penis.

A few individuals of Ambigolimax were found my parents garden in Powys earlier this year. However, when I dissected them I discovered they were too immature – the genitalia had not yet developed. This month I found another individual in the same location and collected it for dissection. Upon dissection the presence of Ambigolimax nyctelius was confirmed by the lack of an appendage on the penis. This was exciting as it was the first record of the Balkan Three Banded Slug (Ambigolimax nyctelius) for Breconshire & Radnorshire!

All the specimens were found under plant pots near my parents greenhouse where I have noticed them in previous years. While this could be an isolated introduced population, it’s expected that the species occurs elsewhere within Breconshire & Radnorshire and other parts of Wales. The species is likely to be found in gardens and allotments, on disturbed ground and around buildings.

Once again an excuse to visit the magnificent Magor Marsh, for another training course organised by the Freshwater Habitats Trust. This time it was all about Duckweeds, led by plant specialist Dr Fred Rumsey of the Natural History Museum. Under his direction we learnt lots about duckweeds. This included how to tell water ferns for duckweeds, and how to know Lemna minor from Lemna minuta. It was a great experience to learn so much about these tiny and easily overlooked water plants. 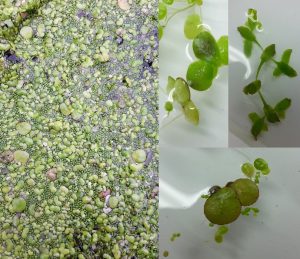 At the beginning of the month I joined several colleagues from the museum in attending the Wales Biodiversity Partnership Conference. This year the conference was on ‘Delivering Nature Recovery in Wales’, and was being held at the beautiful Bangor University. This is where I studied for my undergraduate, so it was lovely to be back and revisit old haunts.

The day before the conference featured a small workshop on Biodiversity & Behaviour Change led by the inspiring Diana Reynolds from the Welsh Government. This took place at the stunning Treborth Botanic Gardens, which I’m ashamed to admit I had never visited before! I particularly loved the green houses full of orchids, the tropical house and the new Chinese garden. If you’re ever up in North Wales I’d recommend popping in for a visit to this hidden gem.

The conference itself was really interesting, with a varied range of organisations attending and speaking. This event brought together a range of people from the public, private and voluntary sectors involved in promoting and monitoring biodiversity and ecosystem action in Wales. It was an amazing opportunity to meet other professionals from the conservation sector in Wales and learn lots of new things along the way.

My favourite part had to be the field visit to Cors Erddreiniog on the Isle of Anglesey. This wetland fen site was an incredibly interesting place to visit, with an interesting management history. Before going on site we stopped and walked up onto a nearby rocky outcrop. From there you could see how the site fit into the surrounding landscape and the pressures the site and wildlife face from the surrounding farmland and forestry. It was inspiring to hear how the sites management plan built a relationship with local farmers, making the most of conservation grazing with cattle. This helps keep the dominance of common reed and great fen sedge at bay, allowing a diverse range of other plants to thrive too. It was wonderful seeing things we’d been talking about that day being put into action.

Back in the museum it was time to crack on with sorting the grassland samples. These were the ones I collected back in July, from reserves in Gwent Wildlife Trust’s Usk to Wye living landscape area. We’d managed to find some beautifully tiny species, as well as an interesting range of slugs. One of my favourite species to find so far was the Common Whorl Snail (Vertigo pygmaea). This is a tiny species of 1.7-2.2mm. They are frequent in dry areas with underlying limestone, but are intolerant of shade. 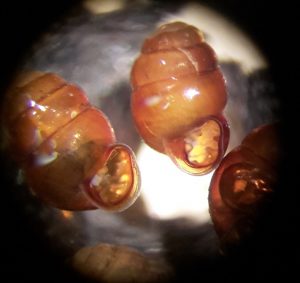 Adult Vertigo pygmaea under the microscope. Check out their little shell ‘teeth’!

I’m currently working on the analysis of this data, but am already noticing some interesting differences! These are not only between the two sites, but appear to be between different fields as well. This could possibly reflect the different types of management (grazing or hay cut) and floral diversity. It’s too early to say whether these results are definitive or significant, but watch this space.

That’s one of my three projects almost completed. Just in time to present at the regional indoor meeting of the Conchological Society of Great Britain and Ireland, being held in November at National Museum Wales, Cardiff.