You are here: Home / Uncategorized / August: Have snails, will travel

Back again with more mollusc related goodness. It’s been a busy month, with lots of travelling and some exciting finds!

At the beginning of the month I headed off to the local records centre, SEWBReC as part of my exchange with their LEMUR+ trainee. Here I spent most of my time working on the Mary Gillham project. Dr Mary Gillham was a pioneering female naturalist, who spent most of her life educating people about nature and campaigning for nature conservation. After her death in 2013 she left a huge archive of materials to SEWBReC, including documents and photos. All of these contain useful biological data and records, hidden away telling interesting stories about nature in South Wales. 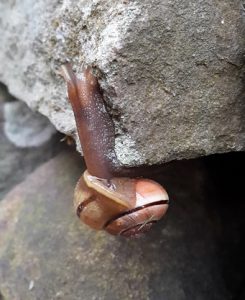 One of the species featured in Mary Gillham’s collection: White Lipped Snail (Cepea hortensis). [Photo my own]

While I was there I spent some time working on entering the data from old photographic slide. Al had kindly picked out a box of slug and snail related ones for me. This was a fun challenge of confirming Mary’s identifications and working out current scientific names.

The archive is a fascinating thing to work on, full of intriguing information and images. There are over 150000 wildlife records to extract out of 20 boxes of assorted papers, and 14000 slides to digitise and recover records from. It’s wonderful to think the work I did while there played a tiny part in that. You can see some of her photos here.

Volunteers are always needed, so if you can spare a few hours a week in Cardiff I’d definitely recommend being part of this fascinating project.

The next week it was time to head off to Northern Ireland and meet up with fellow Natural Talent  trainees Eleanor Lewis and Lorna Blackmore. While there, Lorna and I would be delivering training sessions to TCV Northern Ireland volunteers and others. This was an interesting challenge, as both of us had flown over from mainland Britain limiting what we could bring. I was really worried about flying with empty snail shells in my hand luggage, but the security staff didn’t bat an eyelid! I want to take live slugs on the plane (seems rather cruel!), so some time was spent hunting for live slugs in N.Ireland. It was really hot and dry while we were visiting, so we eventually resorted to heading into Belfast armed with a torch in the evening to see what we could find. Luckily we found a nice range of species, meaning people could get hands on with ID skills at the training session. 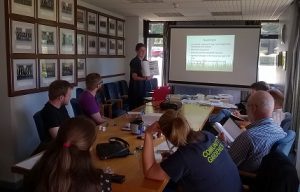 Introducing the wonders of slug and snail identification 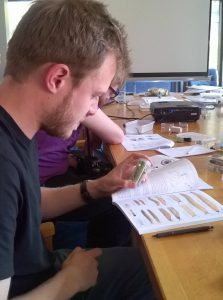 The island of Ireland is interesting. It has quite a different slug fauna, with many species not present and one additional species: The Kerry Slug. This is a slug so rare globally it is even protected by EU wildlife law! Sadly it only occurs in areas of Ireland too far for us the visit on our whirlwind trip. However, this minor disappointment was more than made up for by a visit to the breathtakingly beautiful Giant’s Causeway. 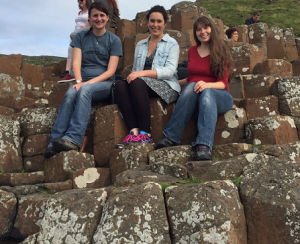 At the beautiful Giant’s Causeway with Ellie and Lorna 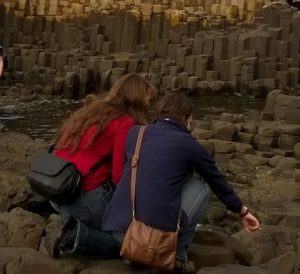 Looking at some impressive limpets with Lorna (of course I looked for molluscs!)

Thanks to Ellie and all the staff at TCV Northern Ireland for doing a wonderful job of hosting our visit.

Less than 24 hours after touching down from Ireland, it was time to head off to Bristol. Here I met up with Natural Networks buddy Delyth Hurley and brought some Common Garden Snails along for the ride. The plan of action was to have a nature day with a slight slug and snail theme. I greeted visitors, ran snail races and helped families handle specimens and use a microscope. Delyth meanwhile was rushed off her feet with keen pond dippers and wildlife treasure trail hunters. A fun varied day! 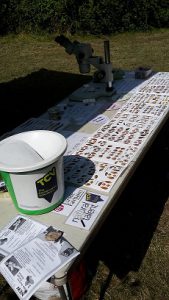 Ready for a fun day at TCV Tree Life Centre 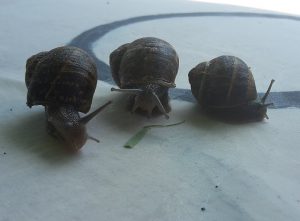 Sabotage! One of the racers is distracted by a blade of juicy grass

What do hedgehogs eat?

The next day it was time to head across to London and pay an overdue visit to TCV Stave Hill and meet up with Natural Networks trainee Clare Street. I have to admit that being a country girl I’m often very snobbish about the city of London. In my mind it’s grey and lifeless. Oh my goodness, did TCV Stave Hill prove me wrong! Even getting off the Tube at Canada Water made me realise just how amazingly green and wildlife filled parts of London are. 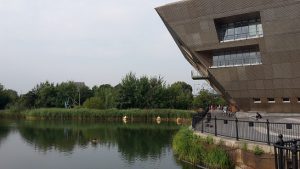 Reaching Stave Hill, I was blown away by the amazing variety of habitats and wildlife. I then got to explore this amazing place with Clare, as we went on a hunt for slugs, snails and other invertebrates. We had some fascinating finds along the way: 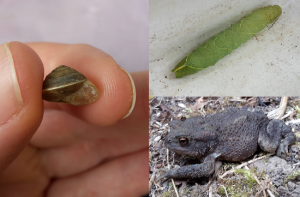 The invertebrates were kept to show to families later that afternoon before being released back where we found them. The aim was to get them thinking about what hedgehogs eat and how to encourage hedgehogs into their gardens. This was a great opportunity to extol the virtues and value of slugs! 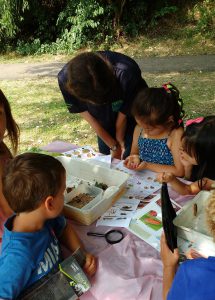 Hands on slug, snail and other invertebrate fun!

While searching around Stave Hill, Clare was kind enough to show me the area where she had seen the Roman Snail (Helix pomatia) before. I was keen to try and find one as it’s a species very rarely found in Wales. After poking around in the bushes, success! 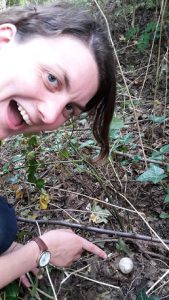 Getting excited about my first Roman Snail encounter! 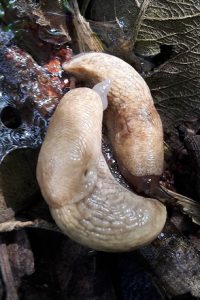 A pair of Netted Filed Slugs (Deroceras reticulatum) showing some dark speckling characteristic of the species. [These two are in courtship]

I’ve been out and about so much I’ve barely seen my office at National Museum Wales, but on a few rare visits I’ve managed to spend time sorting the few specimens I’ve collected during my travels and doing some identification bits and pieces.

While searching for slugs in Northern Ireland, I came across an unusual Deroceras reticulatum (Netted Field Slug). Usually these are white or pale cream with a dark irregular fishnet pattern. This individual was very creamy and unmarked. This was more like Deroceras agreste (Artic Field Slug), a species with only one record in Ireland. The most reliable way to tell the species apart is to have a look at the penis. D.reticulatum has knobbly or frilly appendages on its penis, while D.agreste has a smooth simple penis. 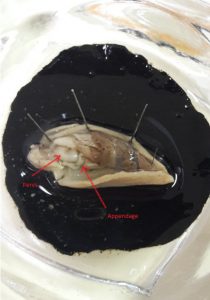 Unfortunately for me not D.agreste this time around, but the very common D.reticulatum! Still a great opportunity to work on my dissection skills.

Is it a Leopard?! 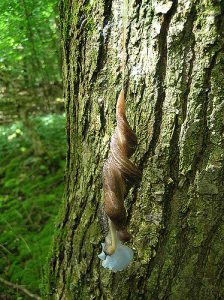 One of the most exciting find was a very odd looking population of Leopard Slug’s around my house in South East Wales. Usually these are very distinctly patterned slugs. Often they have leopard like spots on the mantle and stripy tails. I’ve noticed over the past few years that some near my home have very few to zero markings. Sometimes these are only a few little dots of black on the tail! The FSC guide to Slugs in Britain and Ireland does have a photo of a Leopard Slug with similar markings, so I guessed it was L.maximus, but decided to take one into the museum to look at the genitalia. Now the Leopard Slug is very famous for it’s mating displays, dangling down from branches and walls, bodies intertwined, with a shiny long mass hanging below them. These are actually the genitalia, and means that the typical Leopard Slug penis is incredibly long!

Upon opening up my slug specimen to have a little look at the penis, I discovered that it was unusually short. There also seemed to be a small nipple like structure on the end of the penis, not typical of the Leopard Slug. Ben also looked it over for a second opinion and noticed that the slug had a tomato red patch on its neck under the mantle. This reminded him of some Limacidae slug species found in Italy, so we can’t help wondering if it could be a new species for the UK. 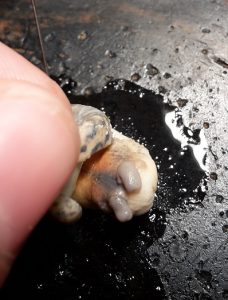 View of tomato red patch on the slugs neck

We decided it would be best to get a second specimen from my garden to compare, as perhaps I just found a very odd individual. So a couple of weeks later I headed out into the garden with a torch and practically stood on one! This one appears much more typically marked for the species than others I have seen. We decided to have it photographed, cut off its tail for DNA analysis, and dissected it.  Analysing the DNA means we can see what species in the genetic bank this individual closest in relation to. I wouldn’t be surprised if this second specimen is Limax maximus, but I’m disappointed I couldn’t find one of the oddly marked ones for DNA work! Keeping both these specimens in the museum means we have a permanent record of this odd population, and they could be looked at again in the future. 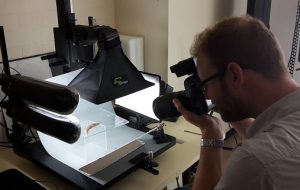 On opening up this second specimen, I discovered it also has a surprisingly short penis, adding to the intrigue! This could simply be down to variation within the population. It will be interesting to compare it with other specimens of Limax maximus from the museum collections and also see what the DNA suggests. 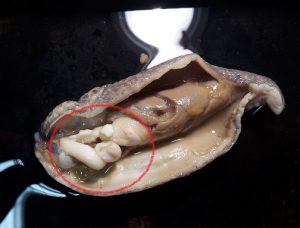 The slug from my garden showing an unusually short penis for the species!

Plenty more excitement to come over the next month.