You are here: Home / Uncategorized / 15 months in 15 minutes

My name is Phil Golder, and I’ve been the Pinewood Ecologist apprentice based at RSPB Abernethy. For those of you that don’t know the Abernethy National Nature Reserve (NNR), it reputedly contains the largest remaining fragment of Caledonian forest. It’s also home to somewhere in the region of 4500 species, and is currently part of an ambitious project to restore woodland, within its natural range, in a large area of the North West Cairngorm National Park.

I’ve been involved in a number of projects during my stay, including counting capercaillie (Tetrao urogallus), crested tits (Lophophanes cristatus) and bits of dead wood (Invertebrate victus), but my main project has been to monitor 24 sites where burning and mowing have been tested as a management tool.

I’ve also spent time surveying the vegetation of a site within the wood, that cattle have previously grazed. This involved measuring the vegetation to determine how effective, in terms of structure and species composition, changes to the shrub layer have been over the longer term (these changes have already been proven over the shorter term in previous years work).

In order to estimate the amount of deadwood on site, I sampled 145 points across all the wooded areas of the reserve. Deadwood is a key indicator of healthy woodland, and is under-represented in UK woodlands. However, the results of this survey should allow us to compare the health of the woods at Abernethy with typical old-growth European woodlands.

Deadwood goes through various stages of decomposition, and we are able to monitor this using a very sophisticated ‘stabbing’ technique, with an appropriate knife. Generally, standing dead pine decays more slowly than lying pine, and pine sapwood decays more quickly that the heartwood. Using the knife can provide a rough guide to the age and structure of the monitored deadwood. 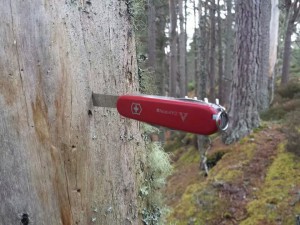 This piece of wood is dead

Perhaps not surprisingly, given the size of the reserve and the amount of older woodland, most of the deadwood is recorded in unmanaged areas. However, the work done to restructure the plantations, allowing light in to improve biodiversity, also has the beneficial side effect of giving the dead wood figures a short term boost.

A slightly different approach was required to estimate the number of capercaillie and crested tit on site. Armed with a compass and range finder, I walked 156 km of transects across all the wooded area of the reserve. Upon seeing (or in the case of the cresties, mostly hearing) a bird, I would record its angle and distance from the transect. This data could then be used to estimate the populations of each species.

Since May 2014 I’ve been working on the in-forest burn and mow sites. These sites were established to determine whether burning and mowing are effective in changing the structure of the low level vegetation layer in open forest. Typically open woodland sites on the reserve are dominated by heather (Calluna vulgaris). It is known that blaeberry (Vaccinium myrtillus) is a favoured food for capercaillie, and in the short term at least, this species benefits from damage to the heather in the shrub layer.

Each site has three plots, one that has been mown, one that has been burnt, and a control plot. The burning and mowing took place in 2002/2003. Within each site I monitor invertebrates, measure the vegetation, and have the dubious pleasure of counting dung and, um, re-counting the dung. This should provide us with an indication of whether the changes invoked by the management techniques are still having an effect, 12 years after treatment (a paper has already been written on the short term effects by Hancock et al). 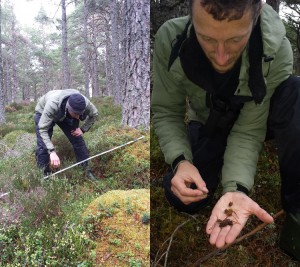 In search of the holy grail, capercaillie dung

During the last three months of my placement, I was lucky enough to be able to spend two weeks a month at the James Hutton Institute, in Aberdeen. The institute has a strong ecological facility where I could call on expertise to help me sort the invertebrates that I’ve collected during the project.

The murky world of pitfall traps, at the James Hutton Institute

Despite seeing numerous capercaillie during the project, and having some fantastic close encounters with crested tit, crossbill (most likely Loxia pytyopsittacus or L. scotica), red squirrel (Sciurus vulgaris) and pine marten (Martes martes), my favourite finds during my time at Abernethy National Nature Reserve are a sawfly of the genus Rhogogaster (these bright green beauties were initially spotted by the masters student collecting sweep net samples with me during June), and Sphagnum linbergii, a rare sphagnum which is only found at high altitude or in the blanket bogs of very North Scotland. 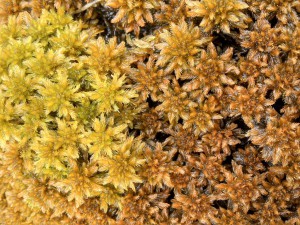 Check out those terminal buds! A slight digression from the project, the gorgeous Sphagnum lindbergii, one of 32 species of sphagnum recorded at Abernethy