You are here: Home / Uncategorized / Of spruce and salmon…. 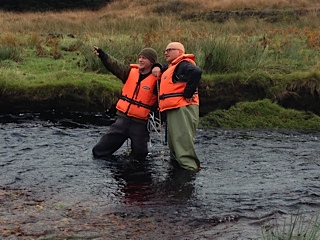 Now, you’d be forgiven for thinking that, in terms of general nature conservation, trees are a good thing –  and very often they are.  However, in a surprisingly large amount of circumstances trees are not such a great thing, at least from a conservation standpoint.

One such circumstance is on the  deep peat found in the Flow Country of Caithness and Sutherland.  During the 1980s a significant area of the Flow Country deep peat was planted with a mixture of Sitka spruce and lodgepole pine and the effects were spectacularly bad however you looked at it: the trees and forestry drains dried the peat both inside and outside of the plantations; predators moved into the newly dried areas and impacted on the breeding success of the bird species on the bog;  the affected areas lost their characteristic peat-forming vegetation of sphagnum mosses and cotton grass; carbon that had been locked up in the peat for millennia started to oxidise and enter the atmosphere as CO2 ; lastly, many of the trees grew so poorly in the waterlogged, acid soil that commercially viable timber could take twice as long to produce if it was produced at all.

While the rest of the UK may have thrown away its Filofaxes and sent it shoulder padded blouses to the charity shop, the deep peats of Caithness and Sutherland are still living with the aftershocks of the 1980s.

Thankfully everyone recognises now that deep peat forestry is a pretty bad idea and projects are underway at sites across the nation that are trying to undo some of the damage done to raised and blanket bogs in the name of name of crazy 80s tax incentives.  One such project has just got underway in the Dyke forestry plantation, part of the RSPB’s reserve at Forsinard.

So then, the trees are coming down and all is well with the world, right?  Well, in the long run yes (we think), but in the shorter term there are concerns that taking out so many trees may cause a sudden flush of sediment into the nearby River Dyke.  If this were to happen it might impact on the survival and development of salmon embryos buried by their parents as fertilised eggs in patches of gravel known as redds.   Now, salmon, trout and other parts of the aquatic ecosystem, are of course important in their own right, but they are also an important economic resource locally as well as nationally.   Given the pressing need to remove inappropriate forestry from deep peats and the often great economic significance of game fishing in these areas it’s pretty important to get a handle on potential impacts such as these and to test methods for controlling them if and when they occur.  To this end the RSPB has installed sediment traps in the forestry drains adjacent to the river flowing through the Dyke  to control any inflow of sediment from the forestry operations.

Questions remain however: just how much sediment will operations like the one occurring at the Dyke put into water courses, and what sort of impact might this have on the development of salmon embryos?  The RSPB, along with The Environmental Research Institute and the Strath Halladale Partnership (which manages the River Halladale, into which the River Dyke flows) have resolved to investigate these questions and have given me the opportunity to be involved in the setting up and data collection phase of the experiment.

In a nutshell we will be looking at two related things: whether the felling causes significant amounts of finer sediment to clog up the spaces between particles on the river bed; whether this makes any measurable difference to the survival and size of young salmon living within the river bed.  To these ends we will be burying fertilised salmon eggs in special chambers ,as well as sediment traps, within the river at points upstream and downstream of the felling operations to see what differences (if any) the felling operations make.

Stay tuned for more news on the worryingly expensive equipment I’ve been entrusted with and just how easy it is to do science in a torrential highland river.  Also coming up will be some gentle science explaining the what and the why of some of the things we will be measuring.  Until then, enjoy these pictures of myself and a volunteer surveying the River Dyke  – were measuring  the riverbed at prospective egg burial sites. 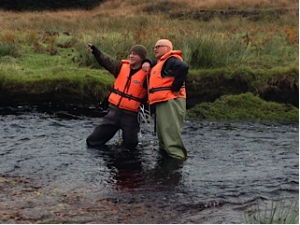 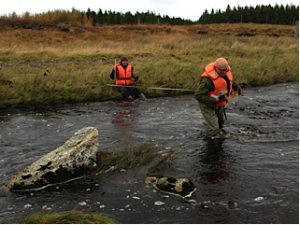 Being bullied by a volunteer © Samantha Kitchen