You are here: Home / Uncategorized / Saving the Peatlands 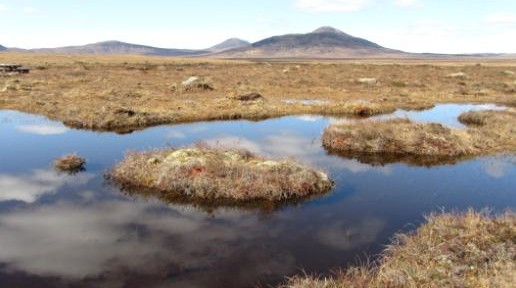 The science of climate change can make for gloomy reading. For many it conjures up images of a morass of drab data all of which points to steadily worsening news. Hope, however, comes in the form of the ambitious work being carried out by the RSPB at their Forsinard reserve in the north of Scotland. So why did the team start by buying 135 pairs of tights? And why is the peace and stillness of the Flow Country being disturbed by the sound of someone blowing bubbles? Read on to find out!

Hello, my name is Paul Stagg and I’m the Peatland Restoration Apprentice based at the RSPB’s Forsinard reserve in the wilds of the Flow Country.

Prior to starting my Natural Talent apprenticeship with TCV I was a residential-volunteer with the RSPB, working at several sites including a five month stint at Forsinard over the summer. During that time I developed a real affection for this remote peatland wilderness and its wildlife; from the sky-dancing hen harriers, rare scoters and plethora of upland waders to the dragonflies and carnivorous plants found around the bog pools. Thus this apprenticeship is an exciting opportunity to return and contribute a little more to the work being done to save our precious peatlands. 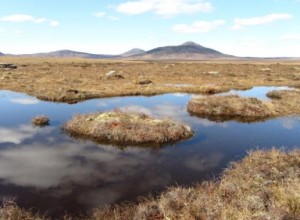 The Peatbogs around Forsinard feature mosaics of bog pools.

A healthy peatbog will absorb carbon from the atmosphere but as it dries out carbon is released instead. Reports suggest that around 10 million tonnes of carbon dioxide escape into the atmosphere from the UK’s damaged peatlands each year so it’s vital that we work to protect them – not just for the golden plovers and scoters of the Flow Country but for the whole planet.

During the 1980s large areas of the Flow Country were planted for commercial forestry but in this cold, nutrient-poor landscape the crop was destined to struggle.  Many drains were also installed, drying out the land in order to make it more suitable for tree growth. Bogs, however, need to be kept wet in order to remain healthy and so the drying of the peat only made the damage worse. Help was at hand as the RSPB moved in, purchasing areas of damaged bog and working to restore them to a healthy state.

A central part of the work being carried out to protect the peatlands is the restoration of land currently planted with trees back to blanket bog. In order to make this effective it is vital that we develop our understanding of this process and optimise the techniques used. To find out more the RSPB has begun an ambitiously large-scale, long-term project to study the relative effectiveness of various leading restoration techniques, covering both the felling of the trees and the blocking of drains.

A key aim of this monitoring is to study changes in the water table as the restoration work is carried out. Drainage, and the growth of the trees themselves, will lower the water table so by felling the trees and blocking the drains the water table should rise – but by how much, and which techniques will be best at producing a consistently high water table within the peat?

To find out 270 dipwells have been installed across a number of afforested and open bog study plots. Each is a length of plastic pipe sunk into the ground. Holes drilled in the sides allow water to enter the well and the whole thing is wrapped in one leg of a pair of tights to filter out particles of peat (hence that bulk order for tights I mentioned earlier!). In order to measure the distance between the ground surface and the water table a meter-stick is lowered into the well whilst the observer blows air through a tube taped to it. When the tube reaches water the sound of bubbles comes echoing up through the pipe. Measurements are also taken of soil moisture content and temperature. As the project progresses these surveys will be expanded to cover plant and animal life at the study sites in greater depth – more on that as it happens! 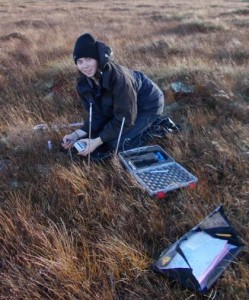 The Apprentice in his natural habitat.