You are here: Home / Uncategorized / Looking out for incy wincy 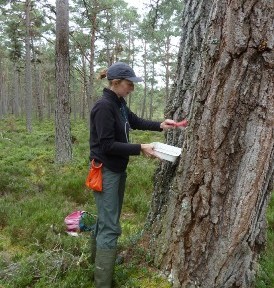 Abernethy forest is very special. It is the largest tract of native Scots pinewood in Britain and is home to 800 nationally scarce or rare species. As well as the ospreys, crested tits, capers, red squirrels and pine martens, Abernethy is home to many special invertebrates which include of course the lovely wood ants, the narrow-headed ant, rare hoverflies, 800 beetles (!!), plus tons of moths and butterflies. You might not know that a variety of rare spiders also call the pinewoods of Abernethy their home.

Most people would grimace at the idea of going out to look for spiders, it’s not your average weekend pastime! Poor spiders get a bad name, a name that is totally undeserved. Spiders provide a source of food for birds and other creatures, they are very beautiful and have incredibly interesting life histories. Reading about some of the pinewood specialists, I was eager to find out more about the spiders that can be found at Abernethy and try act as an ambassador for gorgeous Scottish arachnids. 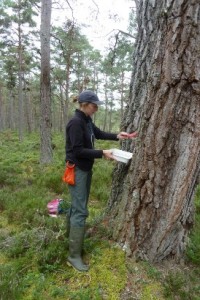 Brushing down park to dislodge spiders

I was very lucky to be joined by Mike Davidson, a spider enthusiast who has studied spiders for 20 years, for two whole days of spider hunting at Abernethy. We were on the hunt of some rare spiders but we are also keen to do some general recording and see what was out and about. Through the course of our fieldwork we used suction sampling (using a converted leaf blower) on heathland to uncover small ground dwelling species, bashed vegetation such as low hanging pine branches and juniper, lifted stones, peeled bark and sifted through moss and leaf litter. We even tried brushing down the bark of pine trees into a tray to try and dislodge arachnids. We were thrilled to discover some rarities during our fieldwork. We found Dipoena torva, a species that makes its home in the crevices of bark on Scots pine, but only on trees that are visited by wood ants. Unsuspecting wood ants travelling up the tree (to visit aphids in the canopy) are caught in the spiders web and then the spider quickly retrieves is catch and hides it before more wood ants come and try to rescue the captured ant. From juniper we found the rare species Dismodicus elevatus and Dictyna pusilla and we also managed to catch Haplodrassus soerenseni, a species only known from two sites in Scotland, both Caledonian pinewood. All of these species are Caledonian pinewood specialists and have been recorded at Abernethy in the past, though not in the spots we found them. It was great to see them up close and personal and learn about their ecology from Mike who is a wealth of knowledge of all things arachnid. We were hoping to find a spider called the Caledonian sac spider (Clubiona subsultans) which lives in leaf litter at the base of pine trees. It has been recorded at Abernethy in the past but it managed to elude us this time. I also really wanted to find the lichen running spider (Philodromus margaritatus), a beautiful crab spider which is camouflaged to look like lichen and lives on pine trees. 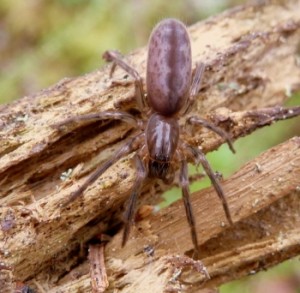 My personal favourite was not actually one of the rarities, but a common species that lives under the bark of pines. Its name is Segestria senoculata and it is a gorgeous velvety black spider, hiding in a little retreat in the bark ready to pounce on prey that touches its web.

Some spiders are so elusive and secretive that you only know they’re present by the signs they leave. Two species in pinewoods called Ero and Agroeca leave strange looking egg sacs woven from silk on bark but the spiders themselves are rarely encountered. 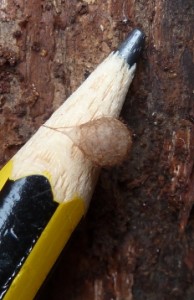 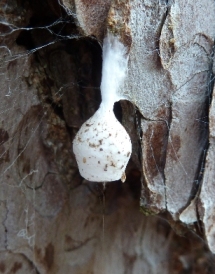 Harvestman are cousins of the spiders and have recently become another object of my desire…when you look at them close-up and see their big brown eyes and spikey faces I can’t help but love them! Here’s one I found with the lovely name Mitopus morio who was providing some red spider mites (also arachnids) with a taxi service. 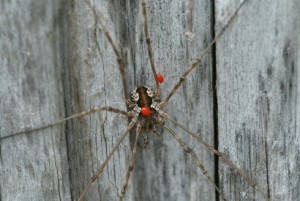 As with all the other critters that I’m studying at the moment, the more I learn about spiders the more they fascinate me, they definitely deserve as much love and praise as the butterflies and dragonflies that always grab all the attention!

With love from the big Abernethy pinewood patch,