You are here: Home / Uncategorized / The Flight of the Hoverfly

She waits. Rigid from the frosty chill a gravid female Marmalade Hoverfly stirs from her winters’ slumber with the first warming rays of spring sunshine. Our sleeping beauty makes her first foray to find a nectar breakfast before searching out aphid colonies on which she will lay her eggs. Exhausted from her labours the matriarch perishes leaving behind a family of fierce hungry larvae that attack and devour the aphids.

The exceptional winter rains left the desolation of the Atlas Mountains of Morocco bejewelled with lush vegetation. In turn there was an unusually large bloom of aphids which gorged themselves and rapidly multiplied to plague proportions. With such an abundance of prey, hundreds upon thousands of these black and marmalade banded flies developed and took to the skies in their migration out of Africa following in the flight lines of the Painted Lady Butterfly.

As summer progresses north into Europe, the hoverflies pursue the bloom of aphids into the Mediterranean. The next generation born here take over the baton and pour into northern Europe with most reaching British shores by the end of June. A hardy few forsake our shores and continue out across the sea to Iceland or find death in the swells of the Atlantic Ocean. 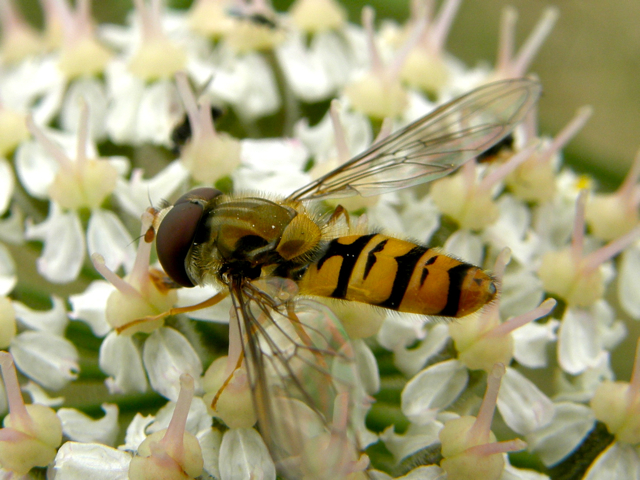 These migrants then lay eggs at our aphid colonies (much to the joy of gardeners and farmers) and after a couple of weeks spent in metamorphosis, the first British born Marmalade hoverflies take to the wing.

The flies will continue to breed and harass aphids until autumn when British born hoverflies start the reverse migration and follow the aphid blooms back toward Africa. When back in Africa the females are mated and then go into hibernation to sleep through the worst of winter to begin the whole cycle again come spring. However, with climatic warming a very small number of pioneers are apparently beginning to hibernate in the warmer southern counties of England.

Every year, this species makes the migration north, up from the desert fringes of North Africa, the Middle East and central Asia. It is a source of wonderment that such small and delicate seeming insects are capable of such journeys. Surely it is a feat to rival the migrations of so called more sophisticated animals such as the Swallow or Caribou?

As with the much publicised Painted Lady invasion, this year there has been a spectacular arrival of Marmalade hoverflies in the UK. Whilst undertaking fieldwork during August in south-east England almost every flower head was festooned with these hoverflies. There were also large numbers on the heather blooms in the Scottish Highlands and Islands. However, they had not come alone for other hoverfly migrants had joined them in exceptional numbers; Scaeva pyrastri, Eupeodes corollae and Eupeodes luniger. 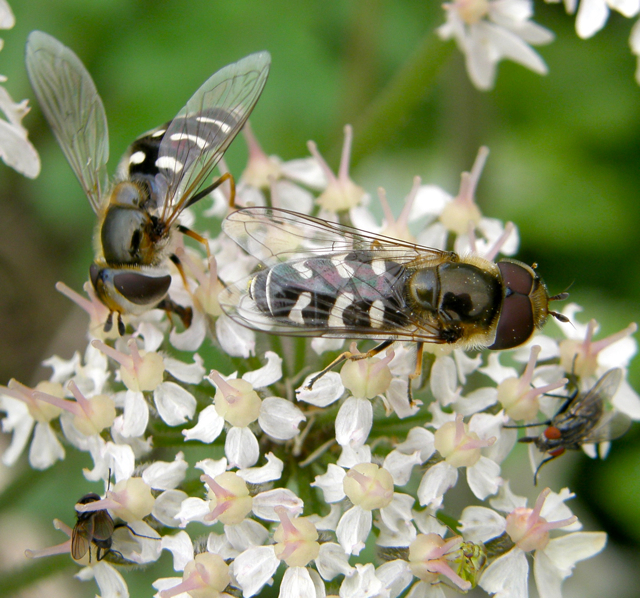 In the coastal regions of southern England they often come in off the sea in great swarms and have been the cause of frenzied consternation at seaside resorts as holiday makers have mistaken them for wasps! So take a look at your local patch of flowers and the chances are a Marmalade Hoverfly will be upon it.