You are here: Home / Uncategorized / Rhododendron ponticum- Beautiful but deadly!

A big focus for my year at Beinn Eighe National Nature Reserve is raising awareness of the non-native invasive Rhododendron ponticum.  Once a favourite of Victorian gardeners, it is now taking over woodlands and hillsides across the Highlands.

Here in Beinn Eighe, people have worked hard to remove rhododendron from the reserve, but this hard work is endangered by plants seeding from land neighbouring the reserve.  But why is it we need to get rid of a plant with such pretty flowers? 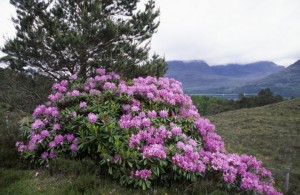 Rhododendron ponticum is a native of southern Europe where dry soils mean very few seeds survive to grow into plants.  Here on the west coast, the soils are anything but dry.  Rhododendron germinates particularly well on the peaty, acidic soils of heathland and bogs, which are both European priority habitats.  It grows quickly, producing dense vegetation that prevents light getting to anything underneath it, threatening the rare plants found on heaths and bogs, as well as the animals that depend on them.

Rhododendrons are also tolerant of shade, meaning they will grow in the depths of woodlands.  The dense cover they create means that tree seedlings cannot grow, and the woodland is doomed to a slow death.  In the meantime, all other groundcover is suppressed, and fewer species of birds and invertebrates, particularly those that are woodland specialists, are present in the woodland.

Add to that the reduction in grazing area it causes on crofters fields, the increased costs for foresters where it impedes forestry operations, and the diseases that it spreads to beech, larch, blaeberry and a number of horticultural plants, the charges stack up against the plant with the pretty pink flowers.

Getting rid of Rhododendron ponticum isn’t easy, but it is possible.  Projects in places including Knoydart have proved it, while efforts in Skye have meant a low- impact method of control called leaver and mulch has been developed to drastically reduce the amount of herbicide needed.  Where rhododendron has been successfully cleared, landowners, communities and environmental organisations have worked together, and listened to each other to get the job done.  It can work!