You are here: Home / Uncategorized / This week: Growing Root Crops

What Are Root Crops?

Root crops includes vegetables that are grown as the root part of the plant. The root swells and this is what we pull or dig up and eat. This includes; 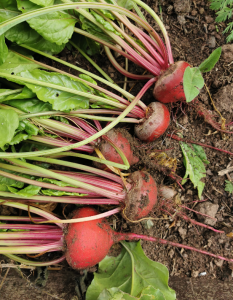 I have not included potatoes as these as a tuber, and I am going to give them their own blog post. We have also previously covered radish as a salad crop so I won’t detail them here.

You can buy multicoloured rainbow carrots – they all taste exactly the same – maybe this will make it more interesting for children to grow and eat them? You can also buy rainbow radish and beetroot, or stripy beetroot.

Turnip and swede are both part of the brassica family – brassicas are cauliflower, broccoli, sprouts, and cabbage – which means they have different growing requirements. This is detailed further down under Crop Rotation.

Parsnip and beetroot have a long growing period, so if you sow the seeds now they will be ready to pull in Aug-Sept-Oct. Parsnips, beetroot and carrot can all be left in the soil over winter with sufficient protection from frost, such as leaf mulch, hay, sawdust, or horticultural fleece.

Horse radish, admittedly, I have never grown before until last summer and we are yet to harvest any! I bought it as a plug plant which we have since divided into four plants, but it hasn’t got big enough to harvest for use. 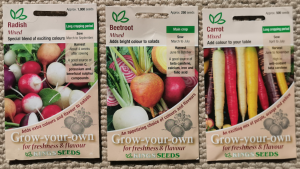 Not only do you want to space seeds out horizontally, you also need to give them room to grow and swell vertically. As these are root crops, they need ample room for their roots to grow! Parsnips will grow as long as you let them, as we discovered last year at Selly Oak and Woodgate Valley Green Gyms… 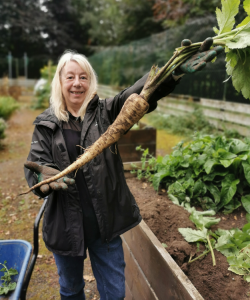 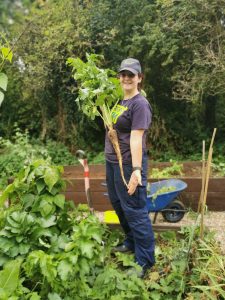 These pics also show the amount of top growth that parsnips have.

Horse radish tends to grow as a clump, so give this a lot of room to spread – maybe 20-25cm in each direction.

For carrot, parsnip, radish and beetroot, the best method I find is to mark out a row and then bodge holes along it with equal spacing. The spacing is determined by how big you want that particular veg to grow, for example, for baby carrots and parsnips, sow seeds closer together (4-5cm). For larger veg, sow seeds further apart (7-10cm)

Roots grown for baby crops can be grown in trough planters, windowsill pots, or shallow raised beds. None of these crops flower so don’t need to be pollinated.

Turnip and swede need lots of room for their top growth – their leaves – as they are brassicas which means they put out a lot of leaves over a wide area. These leaves are edible – you can chop them and put them in bubble & squeak or stir-fry, so don’t chuck them away!

This article was written pre-lockdown, so the best time to sow these crops is in late March or early April. Parsnip needs warmer soil so wait until mid-late April. You could still sow seeds now for a late crop – I sowed more carrot and parsnip on my allotment in the middle of June and they are just starting to come up now.

Carrot, parsnip, beetroot, turnip and swede can all be sown in succession to give you a near-constant harvest. Sow fresh seed every six weeks in new rows – I appreciate that not everybody will have the space to do this!

If you are struggling for space, maybe only sow ten seeds of each to start, then ten more in a few weeks time, ten after that etc.

Crop rotation is done to give the soil a rest from nutrient hungry plants, and also to replenish nutrients in the soil. You should never grow potatoes in the same place for more than three years running, and you should never grow onions (onion, spring onion, leek, garlic) where you have grown peas & beans the previous year.

Brasscias (in this case, turnip and swede) are best grown on ground that previously had peas & beans – legumes fix nitrogen into the soil which brassicas love.

The RHS have some advice on crop rotation here.

Grow enough for your family. If you store them well over winter they will be a source of fresh veg during the colder months too. 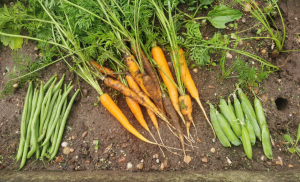