As the wind was blowing through the willows yesterday (22/03/10) at Cowslip Meadow, a small mammal was spotted by John and Katherine. Was it a rat or a water vole? I was called in to adjudicate and as I once helped release Water Voles on a nature reserve near Gloucester I was able to confirm it was Ratty (i.e. the Water Vole from Wind in the Willows by A A Milne!). Mole was not far away judging from the evidence, toad must have been nearby (I didn’t see toad hall though), only Badger was missing (he must have been at home in the wild wood in Bramingham!!). 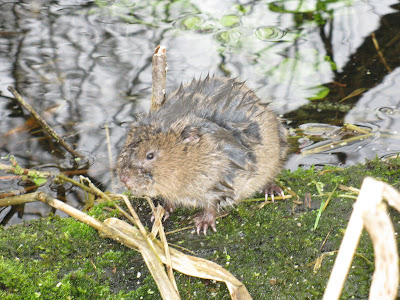 Thanks to Katherine for the loan of her Camera and to John for taking the photo.

Random wildlife encounters are always a great pleasure, and Cowslip Meadow in Luton has some ideal habitat for these creatures. They are actually in great decline across the country due to mink predation, unsensitive habitat management & habitat fragmentation so it is nice to know they are still present in Luton.