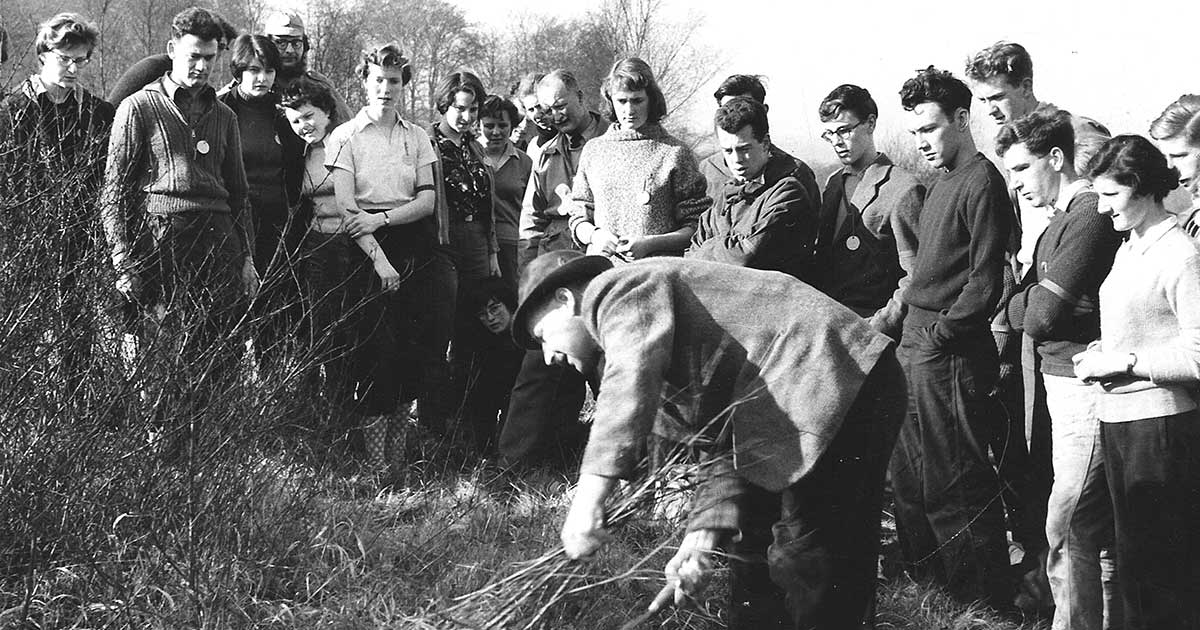 As we celebrated six decades of conservation work in the same year that the climate crisis dominated the headlines and public consciousness, it was clear that the work our community of volunteers has tirelessly carried out is now more important than ever.

We started the year by offering free membership to new and existing members of the TCV Community Network, made possible thanks to players of People’s Postcode Lottery. In April, we reached an incredible 1,000 community groups as part of the network, creating a stronger organisation of groups that share our goals and are working towards the same aim: to create healthier and happier communities.

The continued and generous support from players of People’s Postcode Lottery also allowed us to hold 6 flagship events in Glasgow, Leeds, Doncaster, London and Brighton as part our Big Green Weekend in September – our annual weekend showcasing the scale and breath of the activities we deliver week in, week out across the UK

We were also able to celebrate the TCV 60th Anniversary Hero Awards with a ceremony and reception at City Hall in London. Over the past 60 years, we have witnessed how much difference conservation volunteering can make to an individual’s physical and mental health as well as the environment.

We heard of the positive impact volunteering has had for some of our volunteers and the many ways in which they in turn have inspired others to take to conservation volunteering, surrounded by team members, volunteers, funders and partners, as well as our President Sir Jonathan Porritt.

For TCV to first of all make 60 years as a charity or organisation is fantastic. So, the hope would be maybe for TCV to go another 60 years, make 120! That would be great for people who are going to be in my position and to be able to bring them out the other; to be the person that is maybe underneath all that is holding them back. That would be great.

In a year filled with promises for improvements to our natural environment from those in power, we also celebrated making good on a promise of our own. After winning Corporate Social Responsibility Project of the Year at the 20th Annual Charity Times Awards, our I Dig Trees programme, in partnership with OVO Energy, reached our 1 millionth tree since the programme began in 2015.

The team from OVO joined us to celebrate our 60th anniversary at the TCV 60th Anniversary Tree Planting event in Camden, creating this amazing video that captured the spirit of the day perfectly – featuring Shirley Rodrigues, the Deputy Mayor of London, who helped plant some of the 3,500 trees that went towards the Mayor of London’s target of increasing London’s tree canopy by 10% by 2050.

It wasn’t just internal awards that our volunteers were awarded in 2019. Penge Green Gym were awarded a Queen’s Award for Voluntary Service – the highest award given to volunteer groups across the UK and is the equivalent to the MBE.

In Scotland, the Natural Talent traineeship won the RSPB Nature of Scotland Innovation Award. The award was voted for by a panel chaired by the Director of RSPB Scotland, Anne McCall, and Natural Talent, funded by The Esmée Fairbairn Foundation, was victorious against 3 other shortlisted projects.

Our corporate volunteering partners also helped us celebrate our 60th anniversary in 2019. Wates fundraised and donated over £120,000 to The Conservation Volunteers and 500 staff members have volunteered over 3,000 hours.

Their fundraising achievements have included canoeing the length of Lake Windermere and cycling the width of the country. With their support, we have been able to fund a school Green Gym in London, the planting of 5,000 trees across the UK and the much-needed modernisation of Hollybush.

Across other partnerships, over 5,000 RBS employees volunteered with us in 2019, supporting 71 different community projects across the UK as part of their Team Challenge programme.

We hosted Sky CEO Jeremy Darroch and hundreds of Sky colleagues as part of Sky Cares at TCV projects across the UK. 2019 was also another incredible year for PwC’s One Firm One Day, with over 300 colleagues volunteering with us in May.

Whilst 2019 brought us many reasons to celebrate, we have also taken the time to remember with gratitude the contributions to TCV of Bob Boote, a past TCV Vice President and first Director-General of the Nature Conservancy, and David Bellamy, a volunteer on our first project in 1959 and later Vice President of TCV, both of whom sadly passed away in December.

Now in 2020, with the celebratory bunting packed away and at the start of a new decade, it has become apparent that many things have changed in the past 60 years, but one thing has remained the same: TCV’s vision of bringing people and places together to create happy, healthy and connected communities for everyone.

60 years may be a long time, but our work is not done yet. With the support of our partners and funders, community groups, individual volunteers and donors, we will continue to give everyone the opportunity to make a difference to themselves, their community and future generations as we work together as a global collective to protect our planet.

In the words of our Vice President Sir David Attenborough: